In the land of ice, the sun was mockingly shining without an end. While in Mario Zucchelli Station, we experienced the midnight sunlight that the ancient explorer Pytheas once described as a phenomenon of the extreme North. During the (nominal) nights, we struggled to get some sleep, but the jet lag of so many days seriously tampered with our inner clocks, an effect amplified by the complete absence of darkness.
For the first time since highschool, I had decided to use a watch in order to keep track of time – and I can't remember how many times I re-set the indexes to match the different time zones I transited through these last days.
And after all these sojourns, I had ended up in Terra Nova Bay, named by Captain Scott himself in honour of his ship, the Terra Nova. Further south on the coastline lies the mystical volcano, Mt. Erebus, also named by Scott, after his second ship. The Erebus Crystal, a stone formed in the magma below the Earth that troubles scientists with its bizarre composition, was found in the same region. I would very much like to visit this topography, so I keep my hopes up for the return journey. If the planes from Concordia make a stop at McMurdo, the most populous base in Antarctica, I might have a chance – but such trajectories are rare and occur only in case of need. The American McMurdo base hosts up to 1200 residents, dwarfing Concordia whose maximum is 70; it is located near the foot of Mt. Erebus, and takes its name from a British Naval Officer. It is so large that they also call it “McCity” and perhaps it’s the only place where you can find an ATM in Antarctica. McMurdo is an all-year round station, like Concordia. By contrast, Mario Zucchelli (MZS) is occupied only during the austral summer months. Its nomenclature comes from the namesake Italian head of the PNRA (the National Italian Antarctic Program) in past years. Similarly, the French Polar Institute is named Paul-Emile Victor after another recent Antarctic figure. The French Station Dumont D’Urville, a “neighbour” of Concordia, lies also on the coast, but west in relation to MZS and McMurdo. Monsieur D’Urville whose name is honoured by the station, was an 18th century Antarctic pioneer explorer, also partially responsible for the historic Greek statue of Venus of Milos ending up in the Louvre. On top of these, he made the first claim of a part of Antarctica for France, calling it Terre Adelie, after his wife.
Now it seems that Scott could not resist but make another naming contribution based on his third ship’s appellation: Thus Mount Terror was christened. But to return to Concordia’s perimeter, aside from the French and Italian stations, there is an Australian base close by too, Casey, named after the diplomat Baron Richard Casey. And let us not forget the Russian Vostok Station, also named after an Antarctic Exploration ship! There a huge subterranean lake was recently discovered. Vostok is the closest base to Concordia at only 600 km away. So, understandably, when we speak of “neighbouring bases” one wouldn’t really worry about being disturbed by the neighbours being noisy early in the morning. Between Concordia and MZS there is a tiny unmanned spot called Midpoint, where airplanes can briefly stop for refuelling, if needed. Between Casey and Concordia there is a similar position, called Aurora Basin. 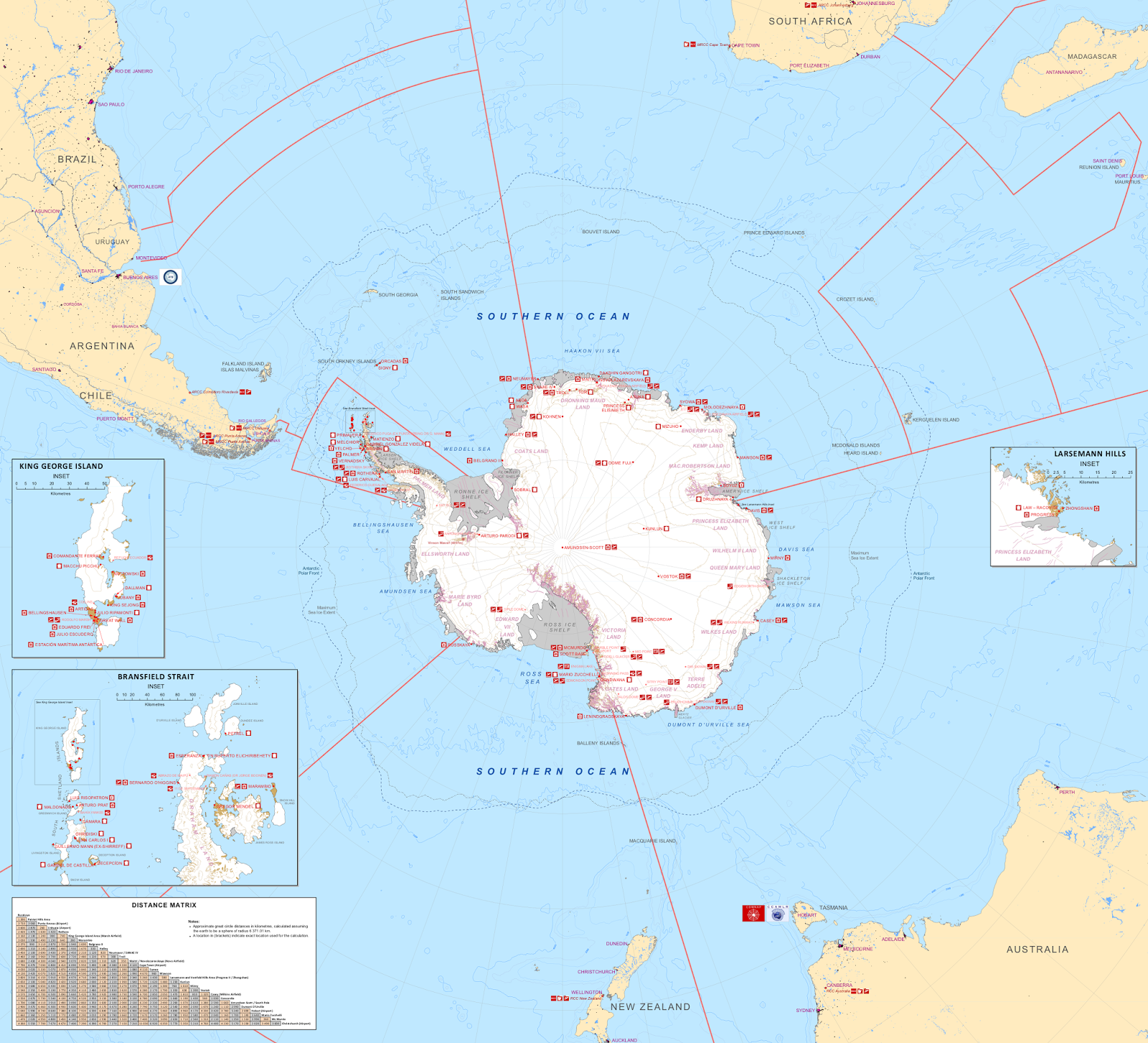 Picture #25: Map of Antarctica and its Stations [Credits: Wikimedia]

But for the time being our little company was residing near the Ross Sea, bearing the name of James Clark Ross, the British explorer of both Arctic and Antarctic. And when we hiked around Mario Zucchelli Station, occasionally we were walking on naught but two meters of frozen water! After 2 days of resting and trying to adjust to sleeping with constant daylight, we decided to explore the nearby surroundings of MZS. Climbing the cliffs around the base, I found a small volcanic rock under the ice and came across what seemed to be a carven figure of an eagle, sculpted by the greatest artist, nature (Picture 27). 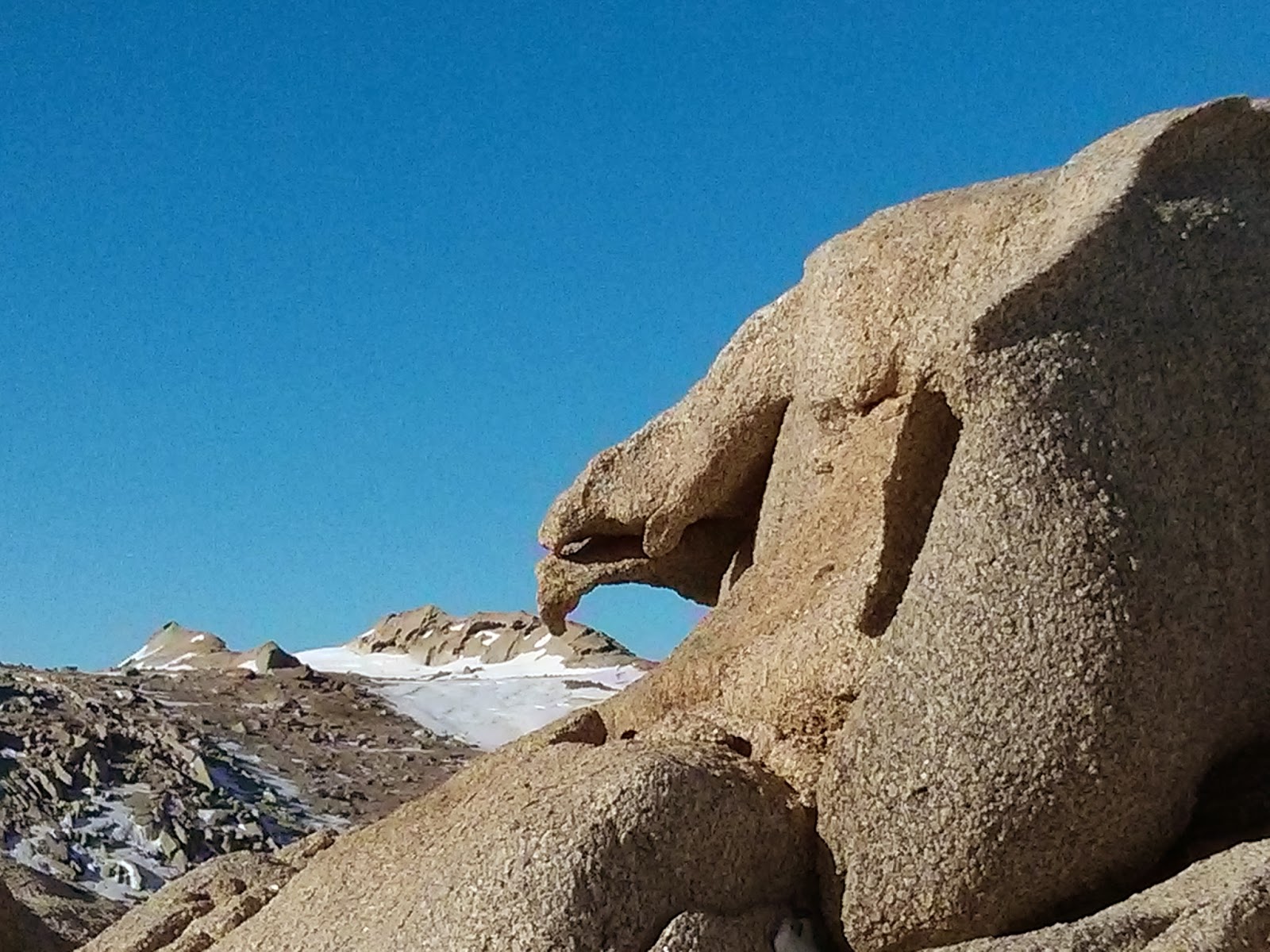 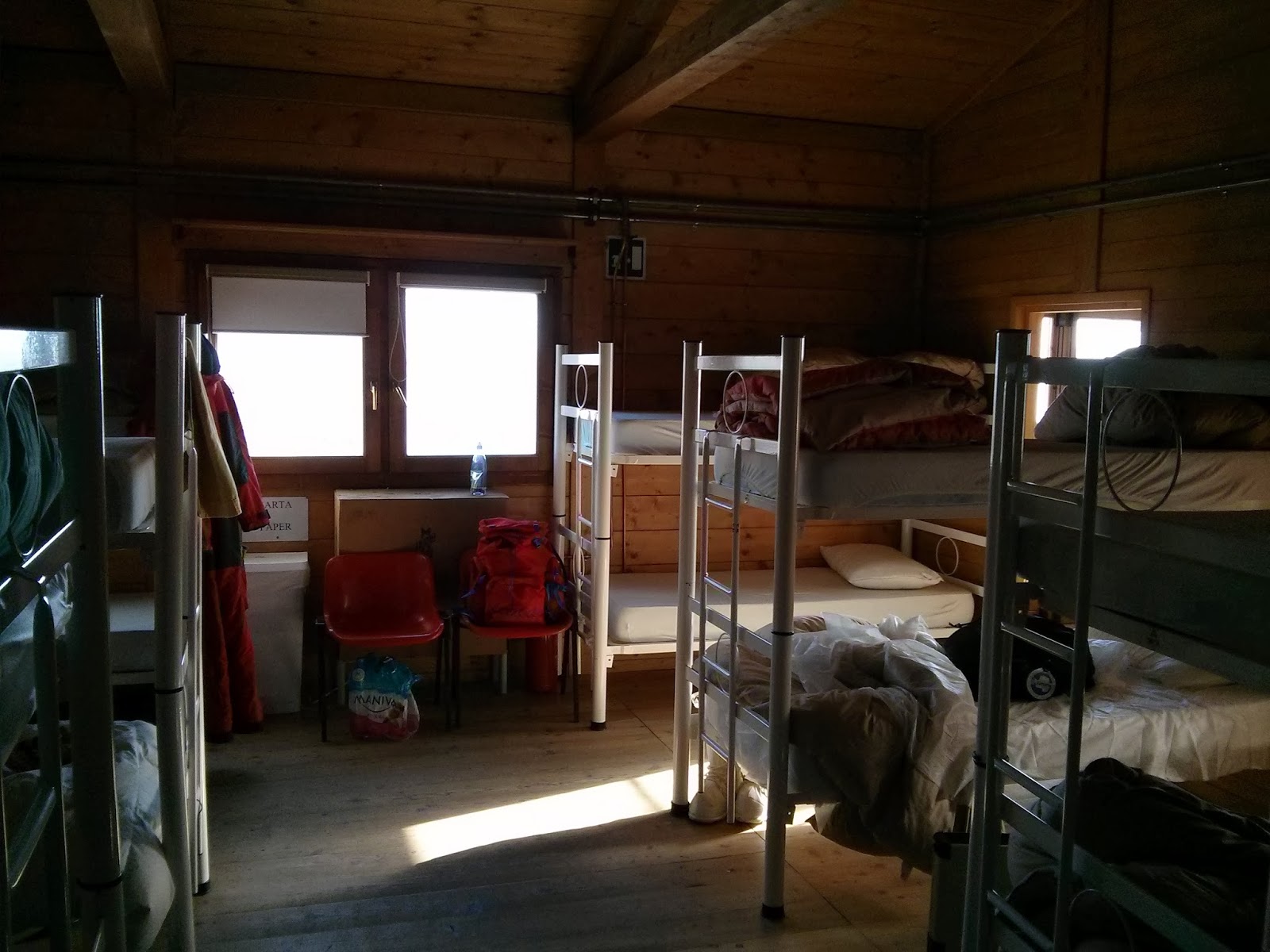 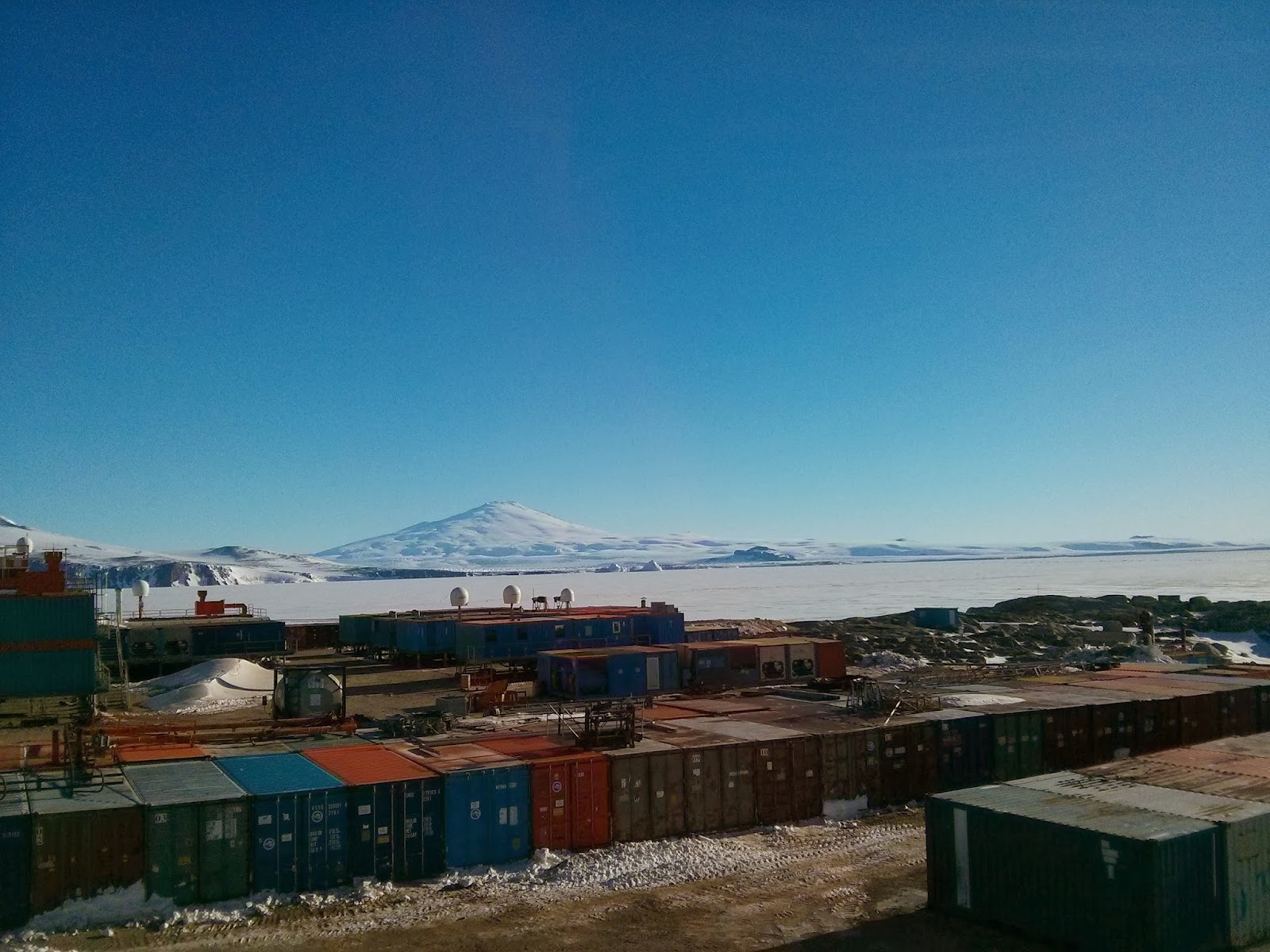 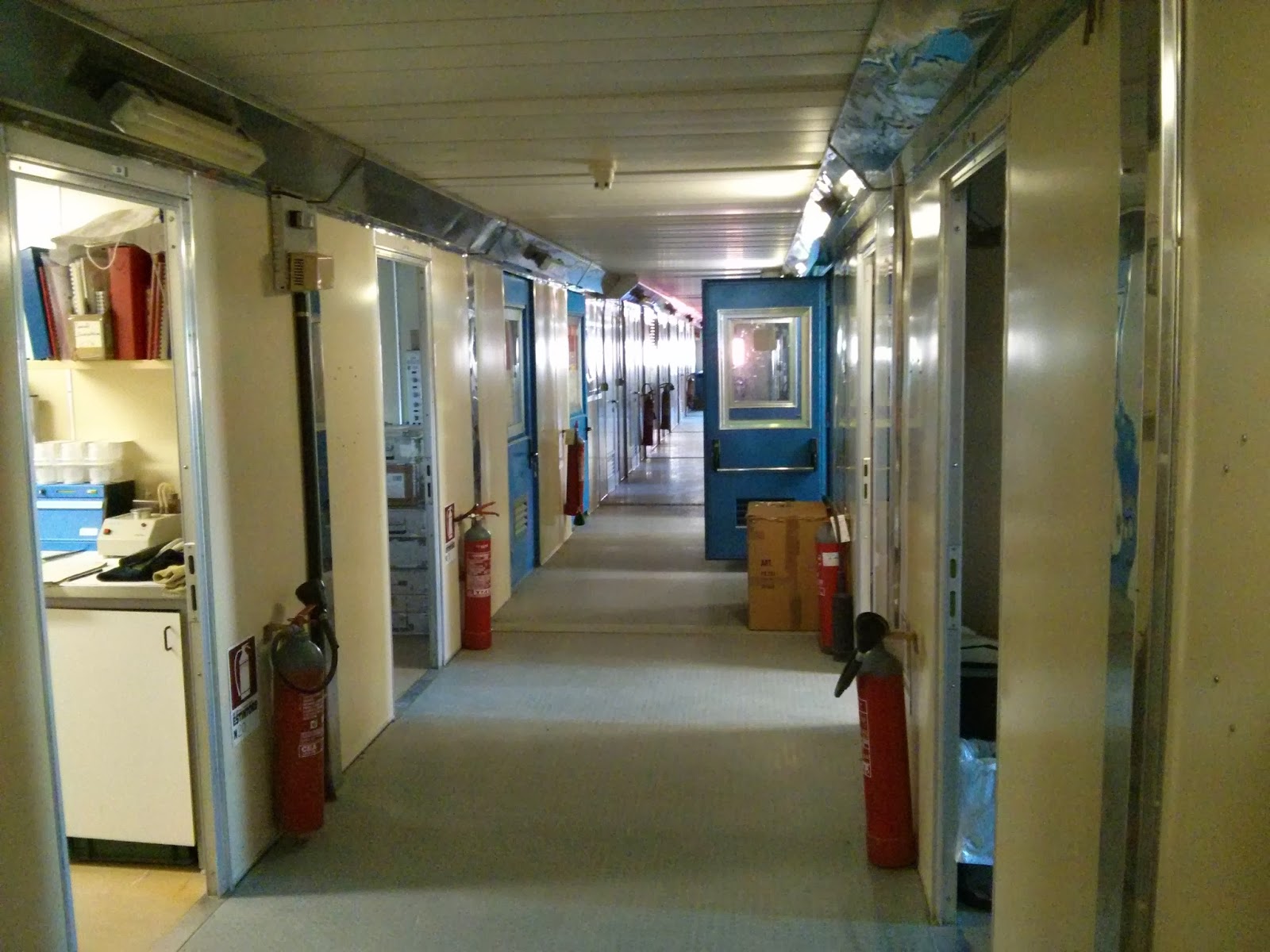 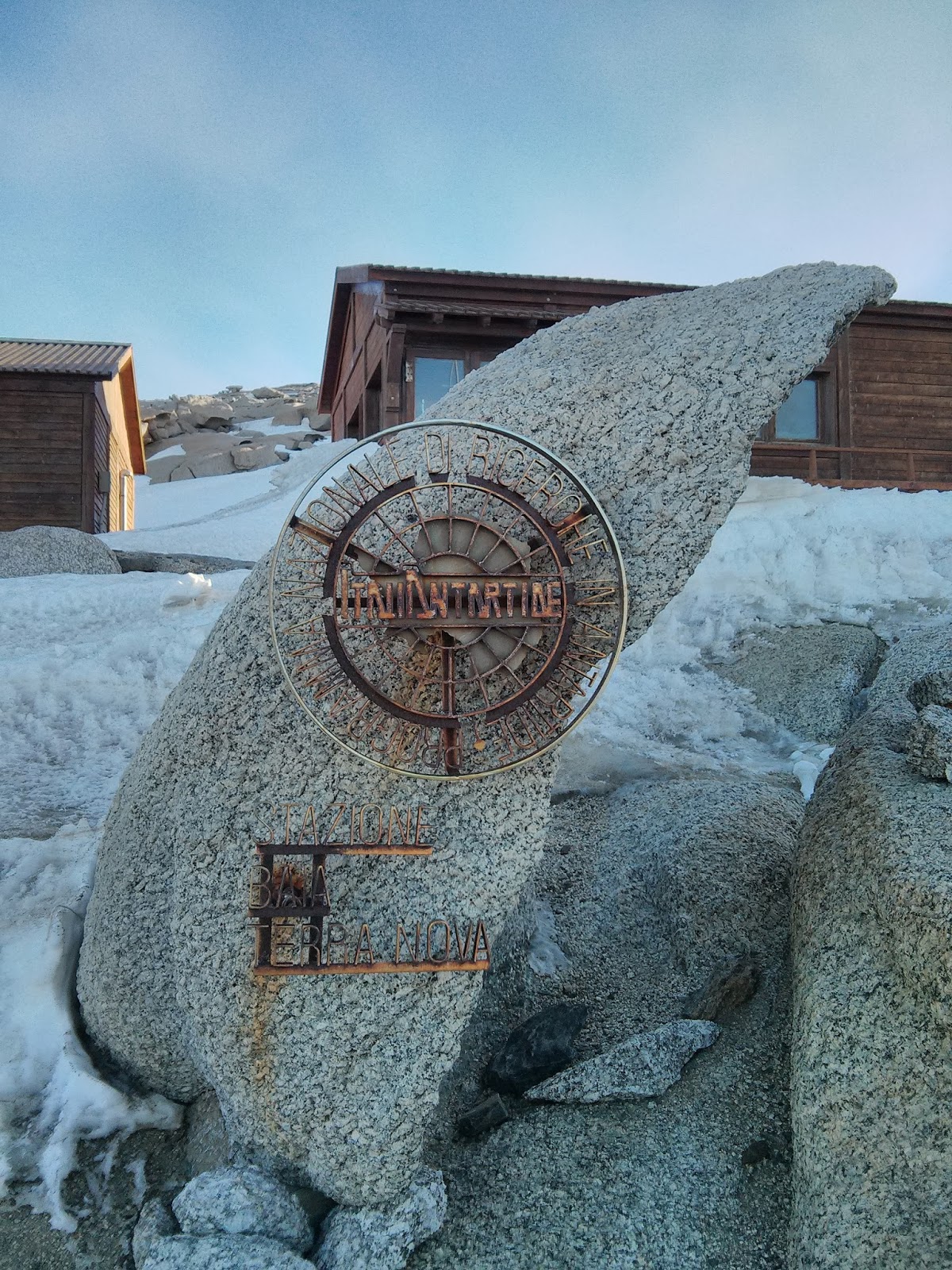 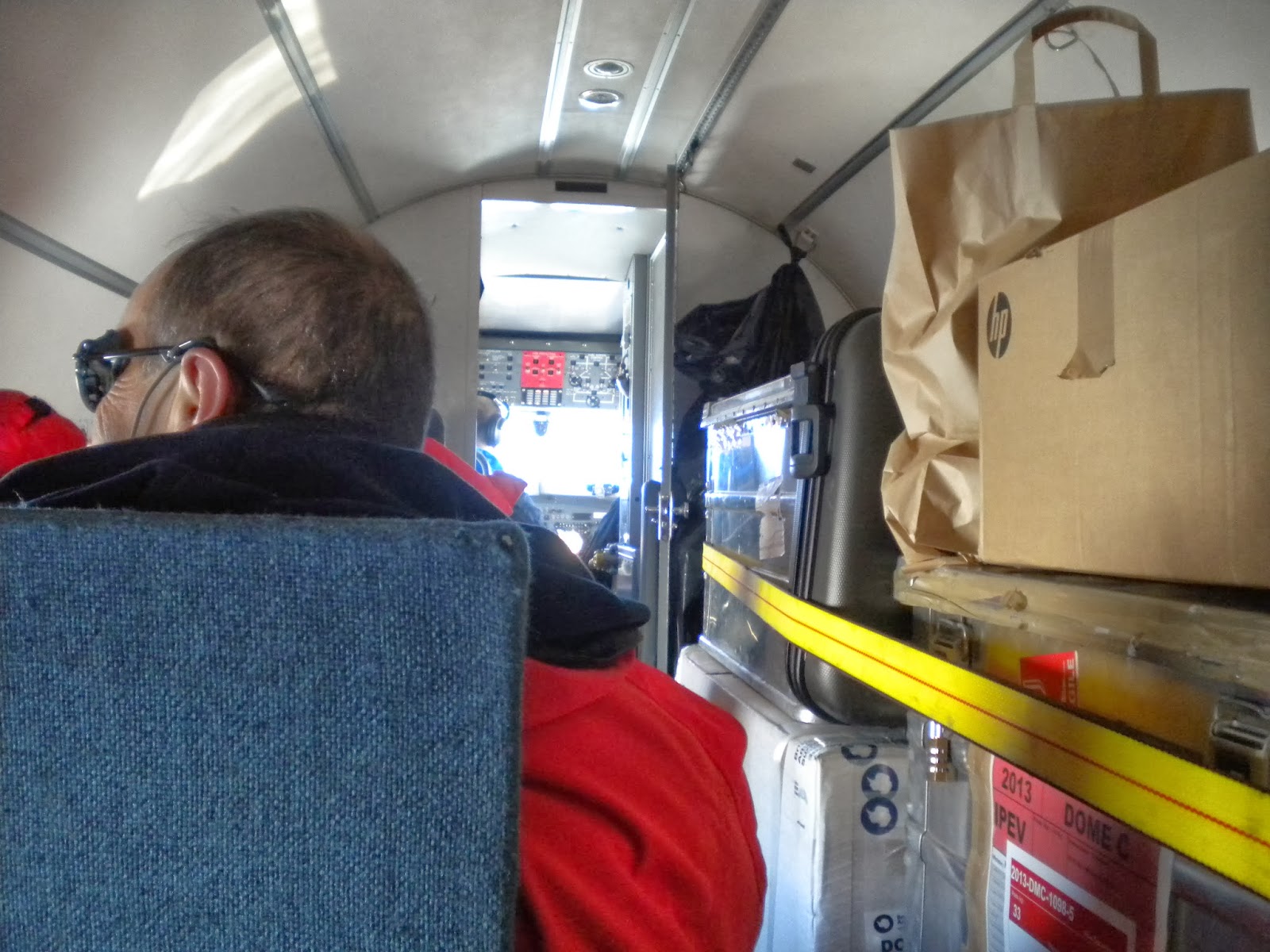 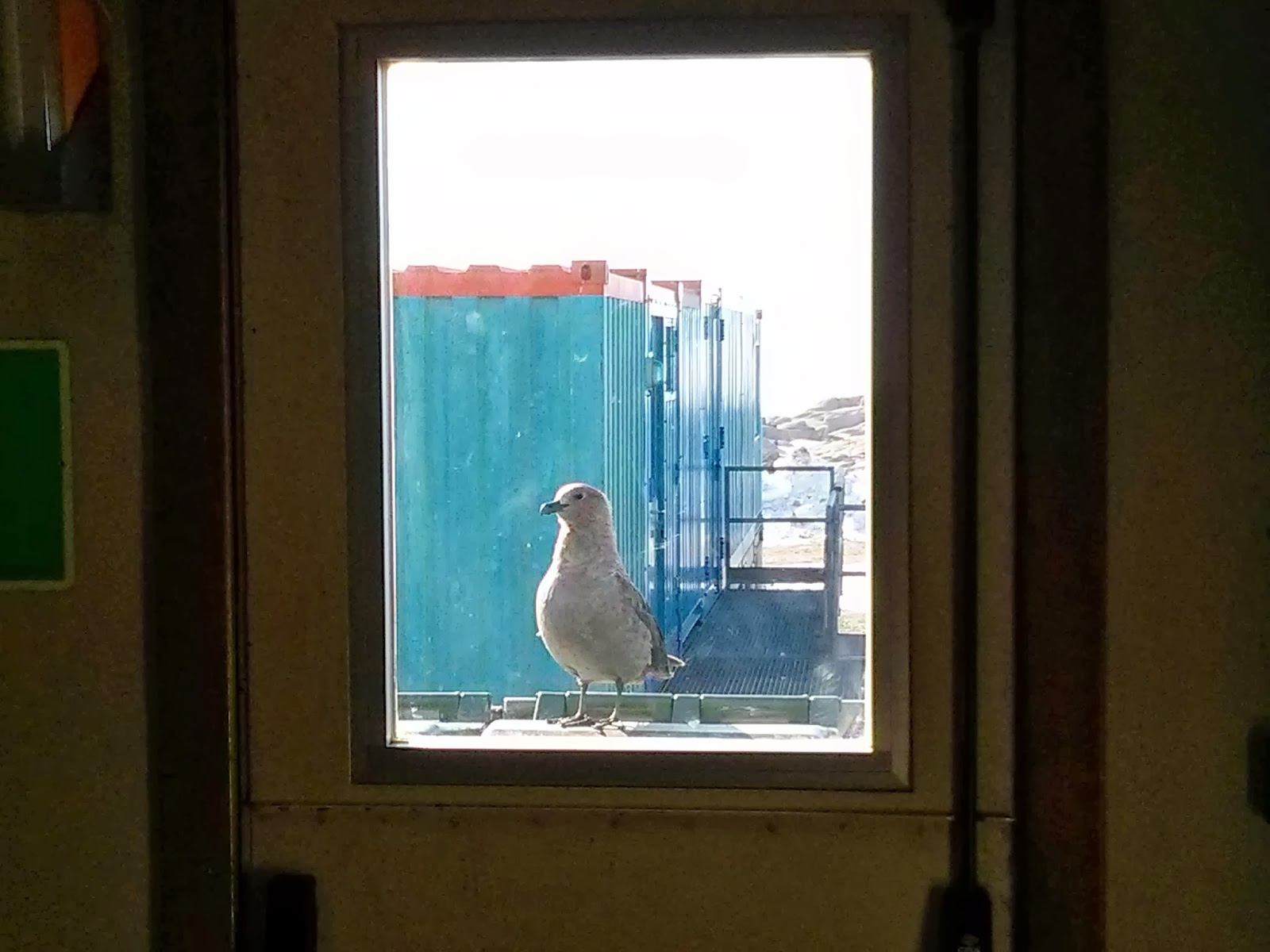 Pictures #29 - #32: Top left – MZS interior    Top right – PNRA plaque at MZS
Bottom left – A lonely skoua bird   Bottom right – The tiny cabin of the Bassler plane
The weather was very “summerlike” at MZS and one could walk about even without heavy Antarctic gear. As we re-entered the base, we found our names on the passenger list of the next plane: Time had come.
We dressed as warm as we could and protected our hands with gloves and our faces with masks. Although this equipment was too much for Terra Nova Bay, it was necessary for our destination. Soon we embarked on the tiny plane (Pictures #32 and #34) with our luggage just on the side. There are even smaller planes that transport passengers between Antarctic Stations, though (Twin Otter type).
Our Bassler was ready for take-off and we basked of expectations to finally reach Dome Circe, after one week in transit. I was amazed to discover the wheels of the plane fixed with ice skates (Picture #35)! 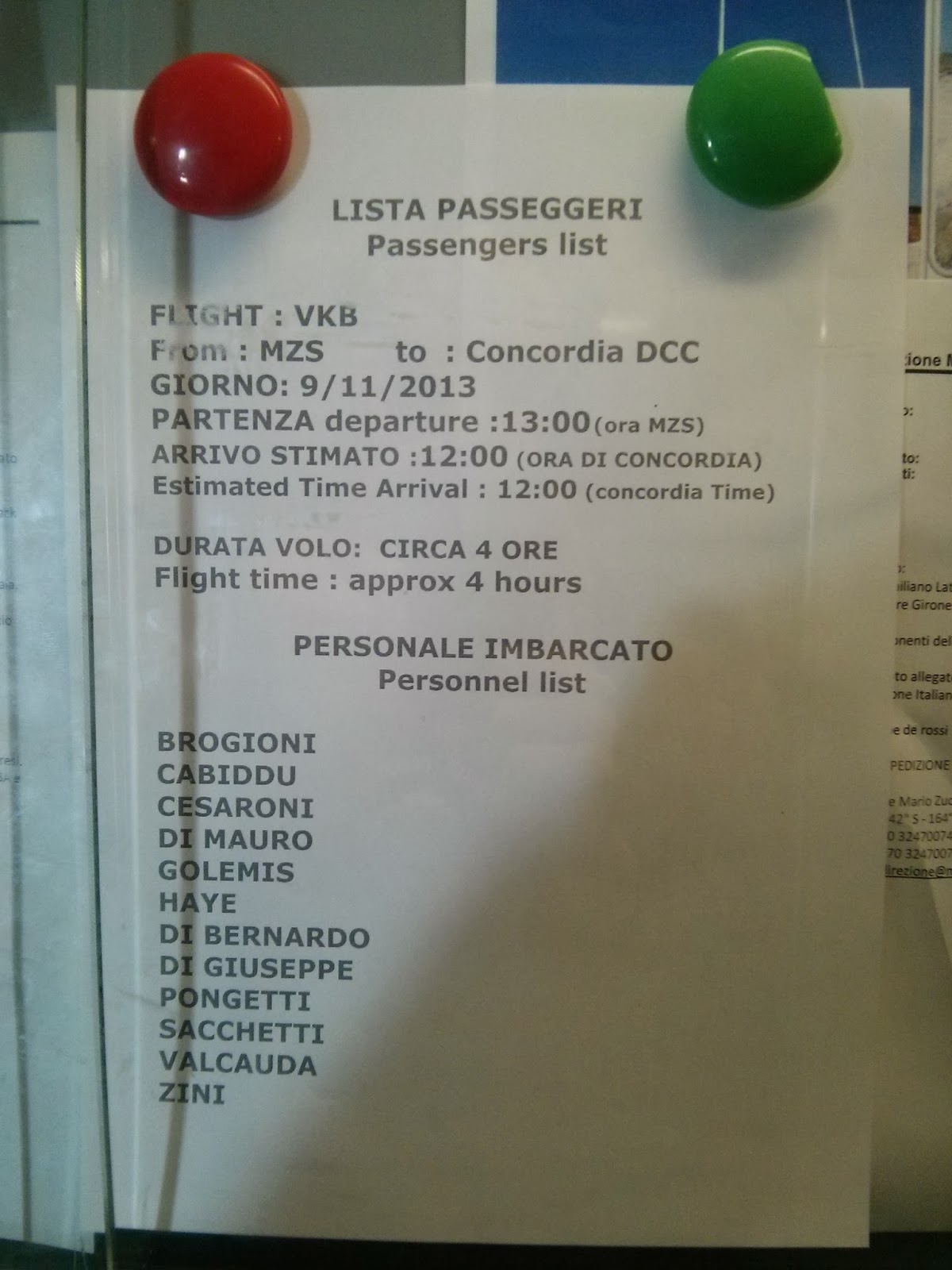 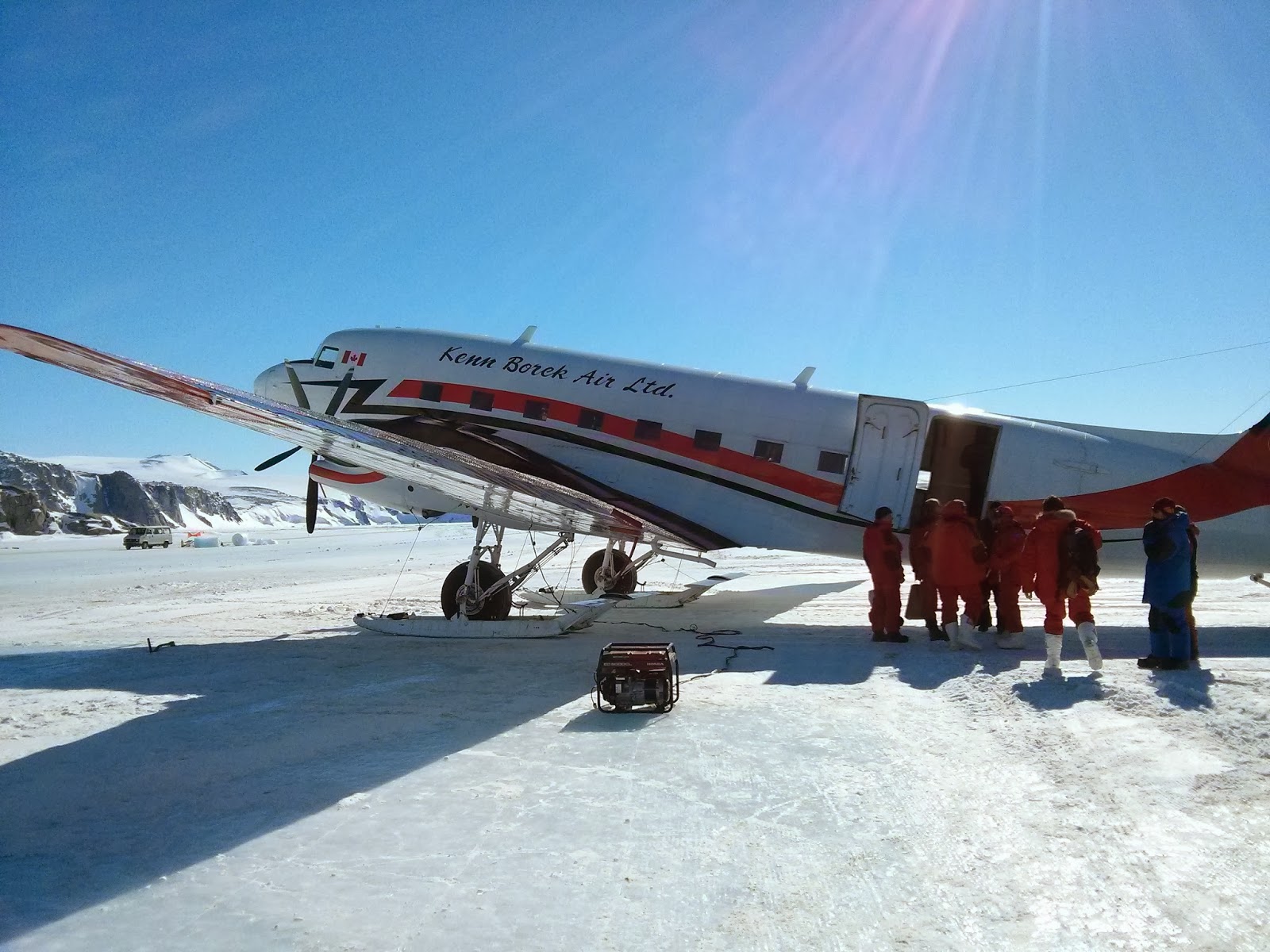 Pictures #33 & #34: The passenger list with our names and the Bassler plane that would transport us 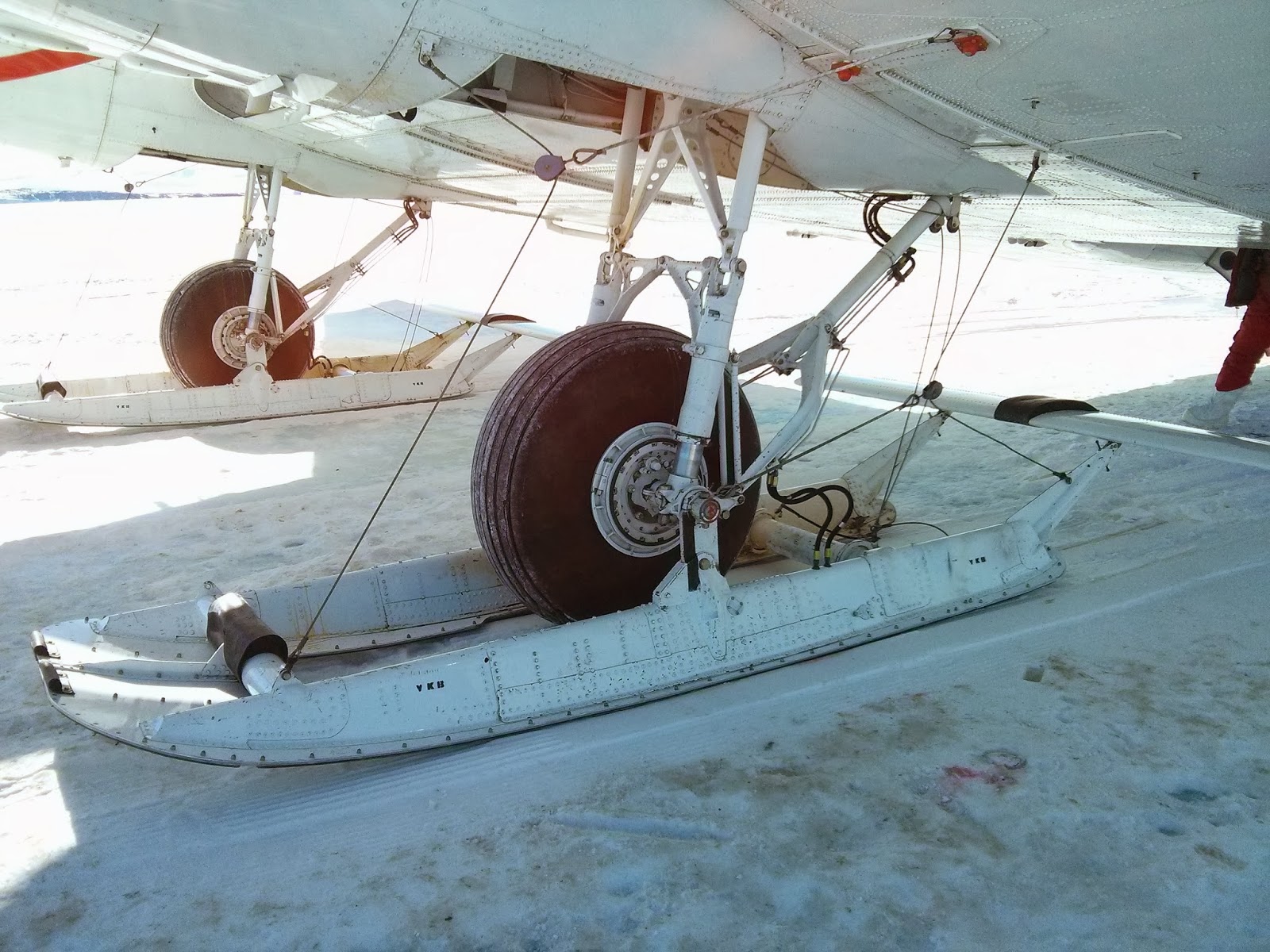 Picture #35: Snowplane!
As we flew above Antarctica, I peered out of Olivier’s window to observe the Antarctic coastline for the first time. The image brought back another memory, the last view of my home country from a different plane window, just before I set out for the end of the world (Pictures #36 and #37). A contrast of feelings. 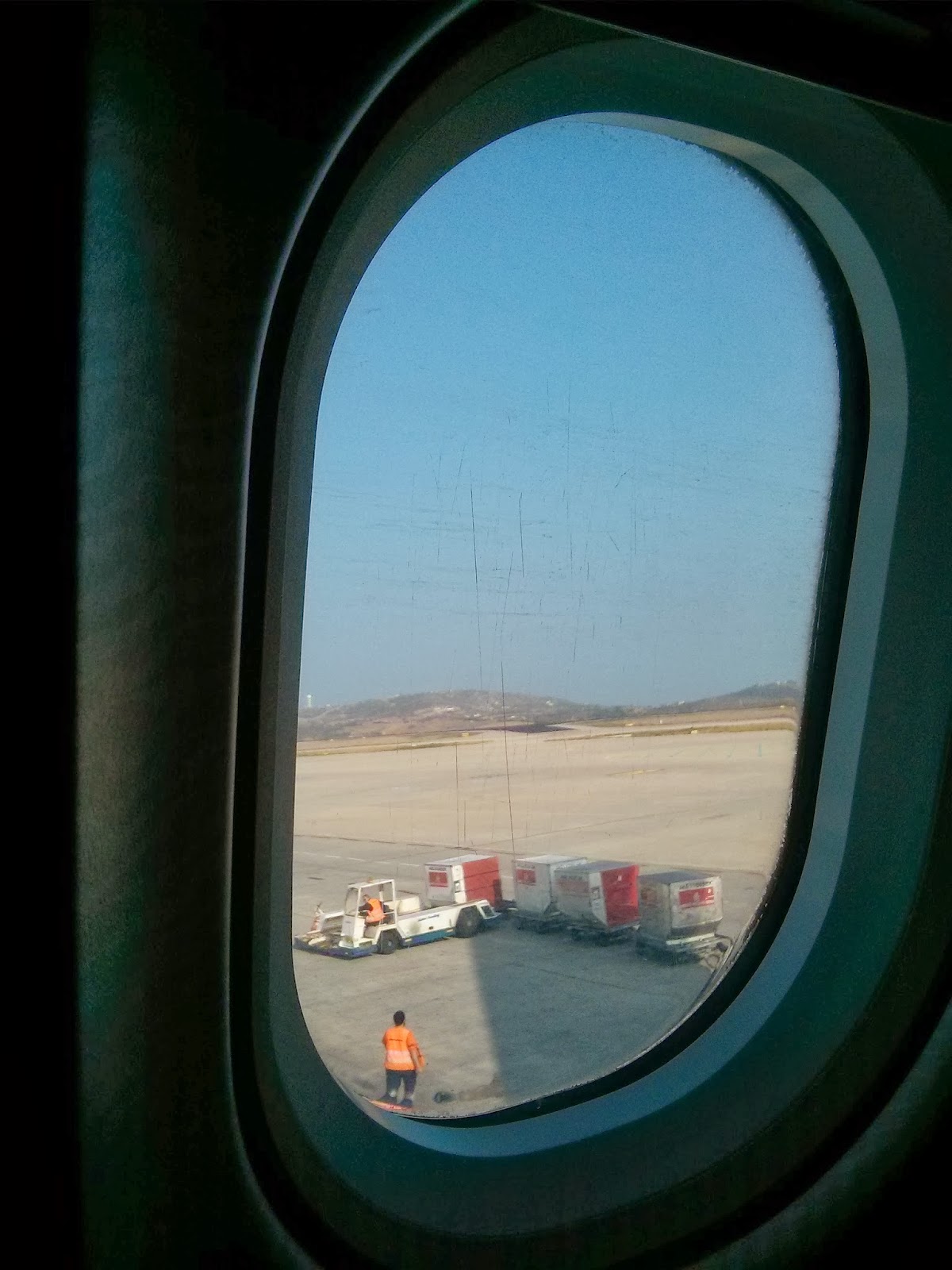 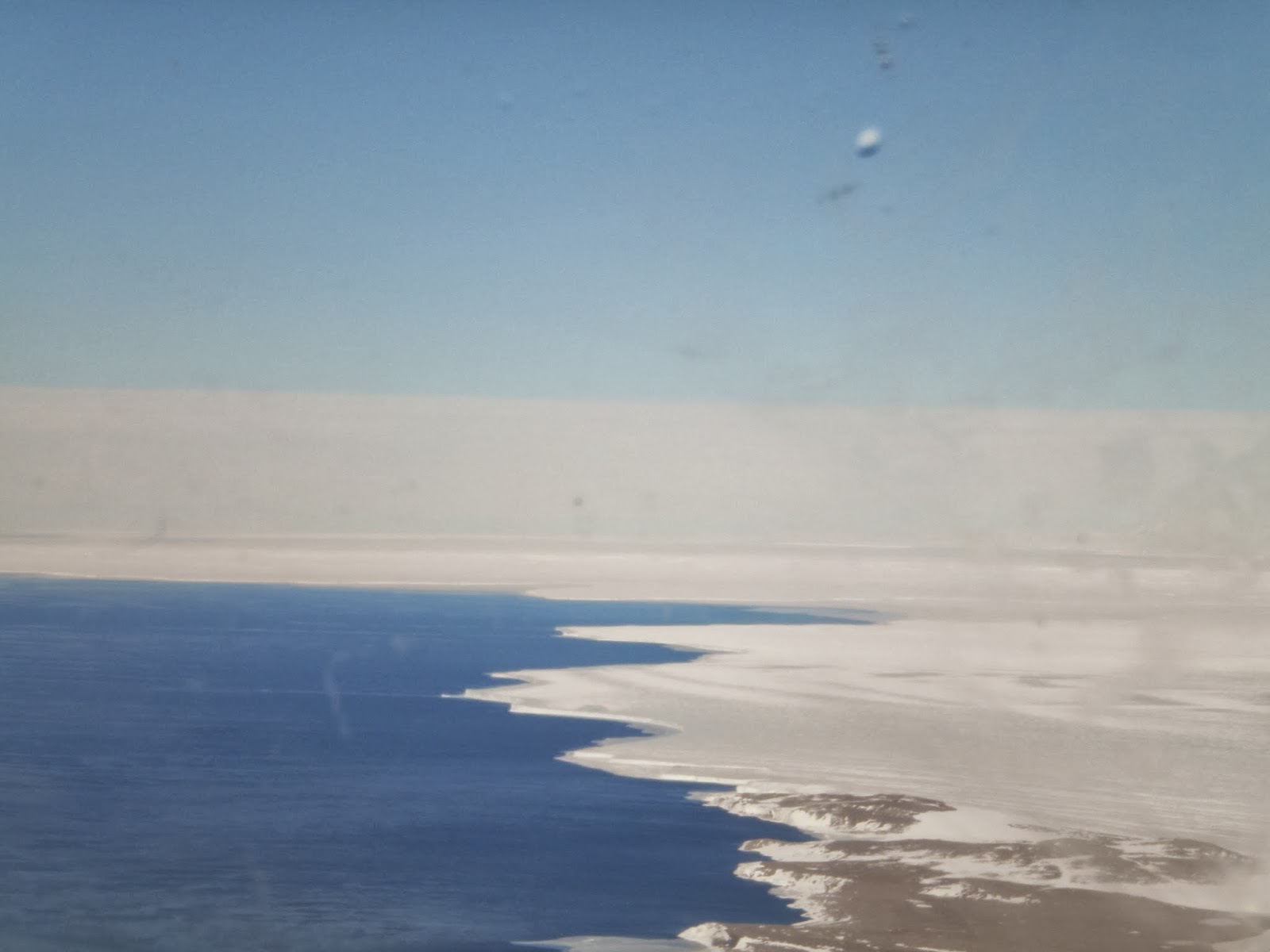 Pictures #36 and #37: Last image of Athens before departure and looking out of the plane window over Antarctica

We flew for four hours and passed through four different time zones. The meridians of the Earth converge at the poles, and while a four-hour flight might take you from Athens (UTC+2) to London (UTC), here we did have to set our watches four hours ahead again.
Finally the pilot’s voice was heard from the speakers: “Prepare for landing”, in a very New Zealanders accent. Concordia could be seen as a tiny spot in the vastness of white, almost like a tin can described in David Bowie’s Space Oddity. In a way, I could expect Major Tom to come out and greet us!

No coastline, mountain or other distinguishable feature was visible around Concordia. This place, our new home for one year, was immersed in a shroud of infinite white. Out of the great seas and massive landmasses, we had finally reached our Realm of Ice.  ҉
If you enjoyed the information in the beginning of this article, don’t forget to support Wikipedia, the only source of free access to the sum of human knowledge. Even a small contribution can make a difference.