Concord Dawn was another fictional world that visited me out of my childhood memories as I feasted my eyes upon the milky vastness of Dome Circe. The name, similar to the Station I was heading for, was quite fitting as a word play: the dawn of a new life for me at Concordia. An arid, sparsely populated world and home to a few adventurers, Concord Dawn’s fictional location was not that far from this reality that manifested before my hungry senses on the ice. But time to return to reality rather than indulge my imagination again. First, here’s a song from a namesake New Zealand band, not so far away now, the sound is electronic with a theme proper for the polar regions that we had now entered:

As the Bassler plane touched down at Dome Circe, I was surprised with the smoothness of the landing on the frozen surface. Clad in polar wear, we rushed out of the hull and into the base entrance. It was an odd feeling to finally step on this most remote structure for which I had read and written about many times (Picture # 38). 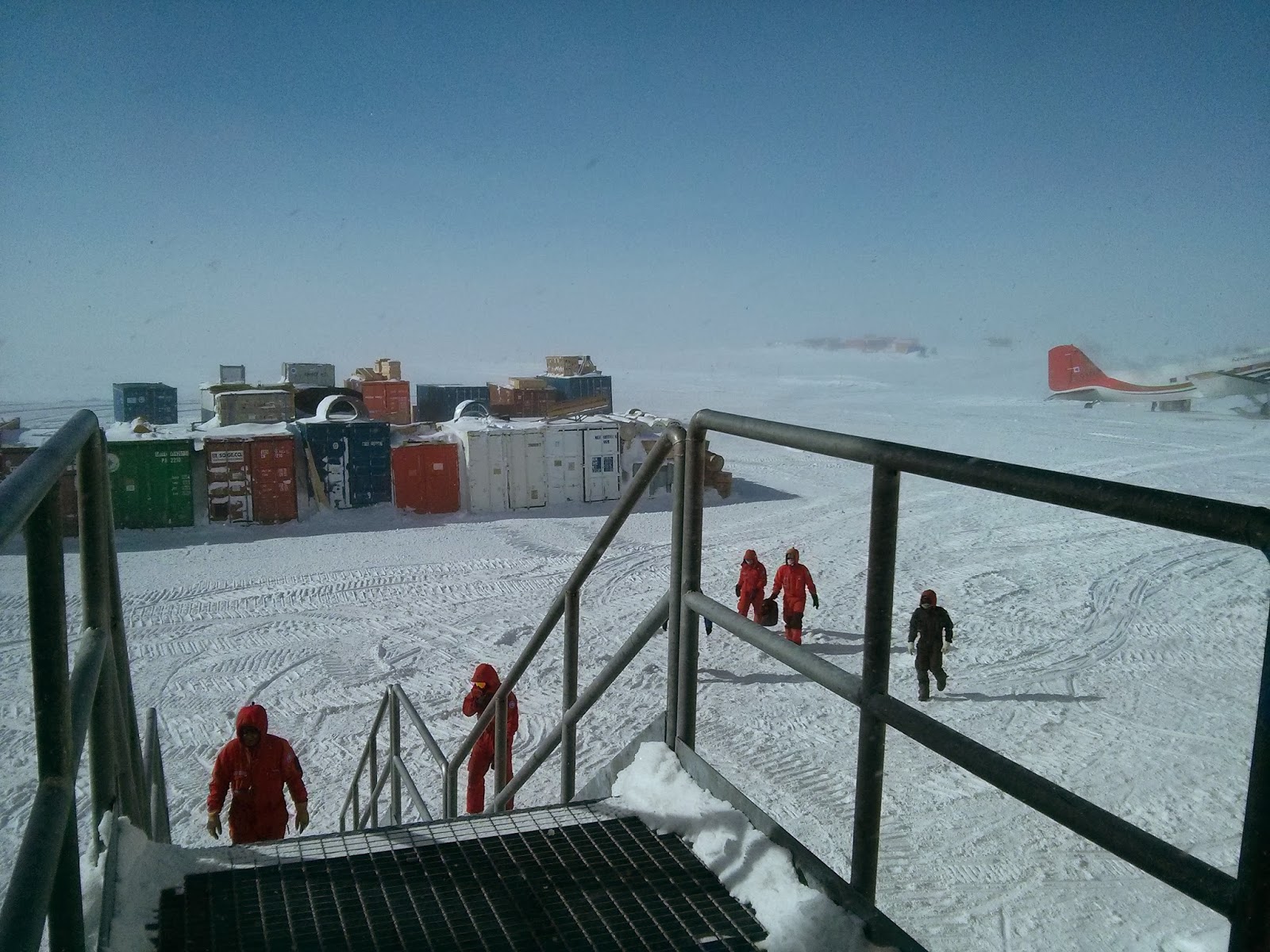 Stepping out of the plane, I was reunited with my compatriot and veteran ESA Doctor, Evangelos Kaimakamis. In a funny, almost theatrical way, the words of a more historical, hard-sought meeting came in my mind. I could easily have said:

And this would be an echo of Stanley meeting Livingstone in the heart of Africa. Instead, we exchanged more casual and hearty greetings, as you will see.

Last year’s crew helped us into the base by carrying our luggage. The hypoxia at Dome Circe is a threat to your health if you do not comply with medical advice. One must minimize physical activity, rest and sleep a lot for the first 2-3 days until you partially acclimatize, otherwise you could face such severe symptoms as pulmonary or cerebral oedema. But these were very rare cases. On the contrary, all of us did suffer from shortage of breath, a feat that still persists to this day when we go up the many stairs of the Station, and of course, headaches! My sleep was very disturbed these first weeks, I would always wake up after 4 or 5 hours and found myself incapable of resting more. In time, sleep quantity was restored to normal and I am proud to say that I can now sleep 7 hours straight! Quality is a different matter, though: Most of us experience a lot of apnoeas during sleep, the result of high altitude and hypoxia. Coupled with the extreme dryness and constant light, it is not uncommon to wake up many times throughout the night – and this is not really expected to improve much. My dreams are always intense here, be them nightmares, which is not rare, or positive ones.

We lived together with Evangelos for almost 10 days in room 14 of Concordia Station. Among other things he trained me in the Medical Experiments that I would have to perform, but we also discussed about a lot of other matters, ranging from space exploration to theatre. 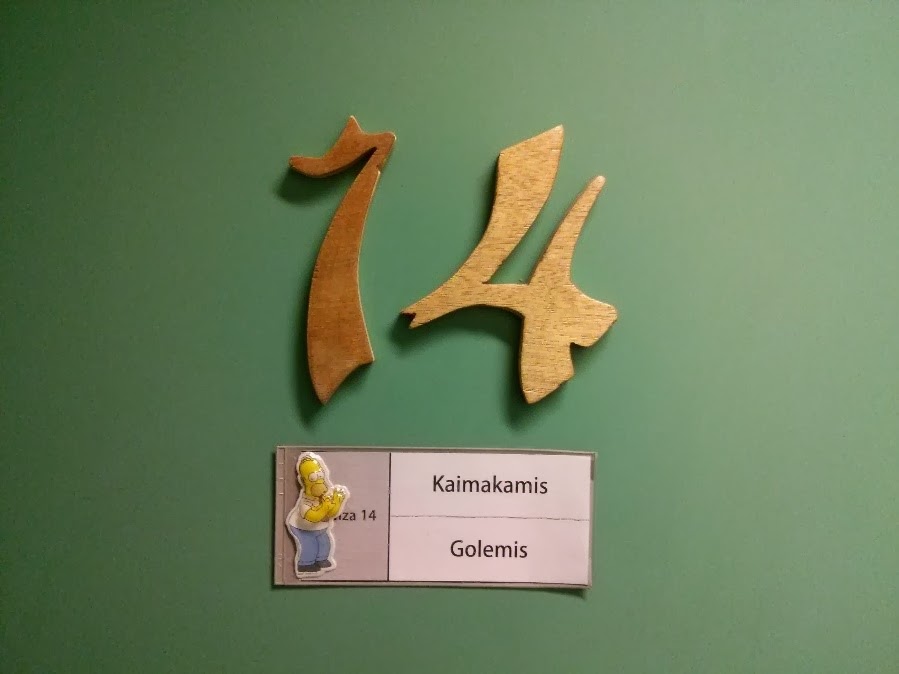 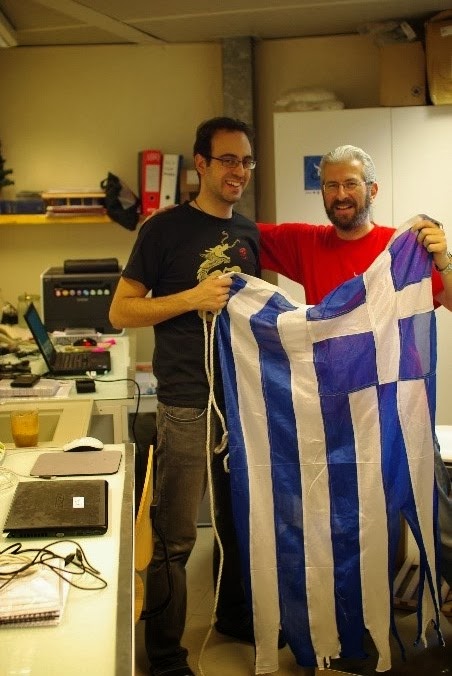 It was a pleasure to converse in Greek on top of English and French – and I hope some Italian for me as well before next year is out! But the time was nigh for Evangelos’ repatriation; in a bit more than a week gooddays suddenly turned into goodbyes.

The same plane that was to transport Evangelos home after his long stay in Antarctica would bring two new colleagues at the Station. I would share the room with one of them and the ESA Lab with the other. When the plane arrived, I followed the departing crew to the frozen runway for the last farewell.

I felt the completeness in the change of roles as I walked Evangelos to the DC3 Dakota plane that was to take him to the Antarctic coast, the start of a long journey back to our dear old Europe and Greece. As I returned back to the base alone, I perceived for the first time the status transition. From a guest and novice to Concordia Base, during my first week of training, I was now taking my first steps on my own, as one of the 13 winter wardens of the Station. In spite of the exhaustion, having slept no more than 5 hours every day since my arrival, I felt deep awareness, I felt alive. 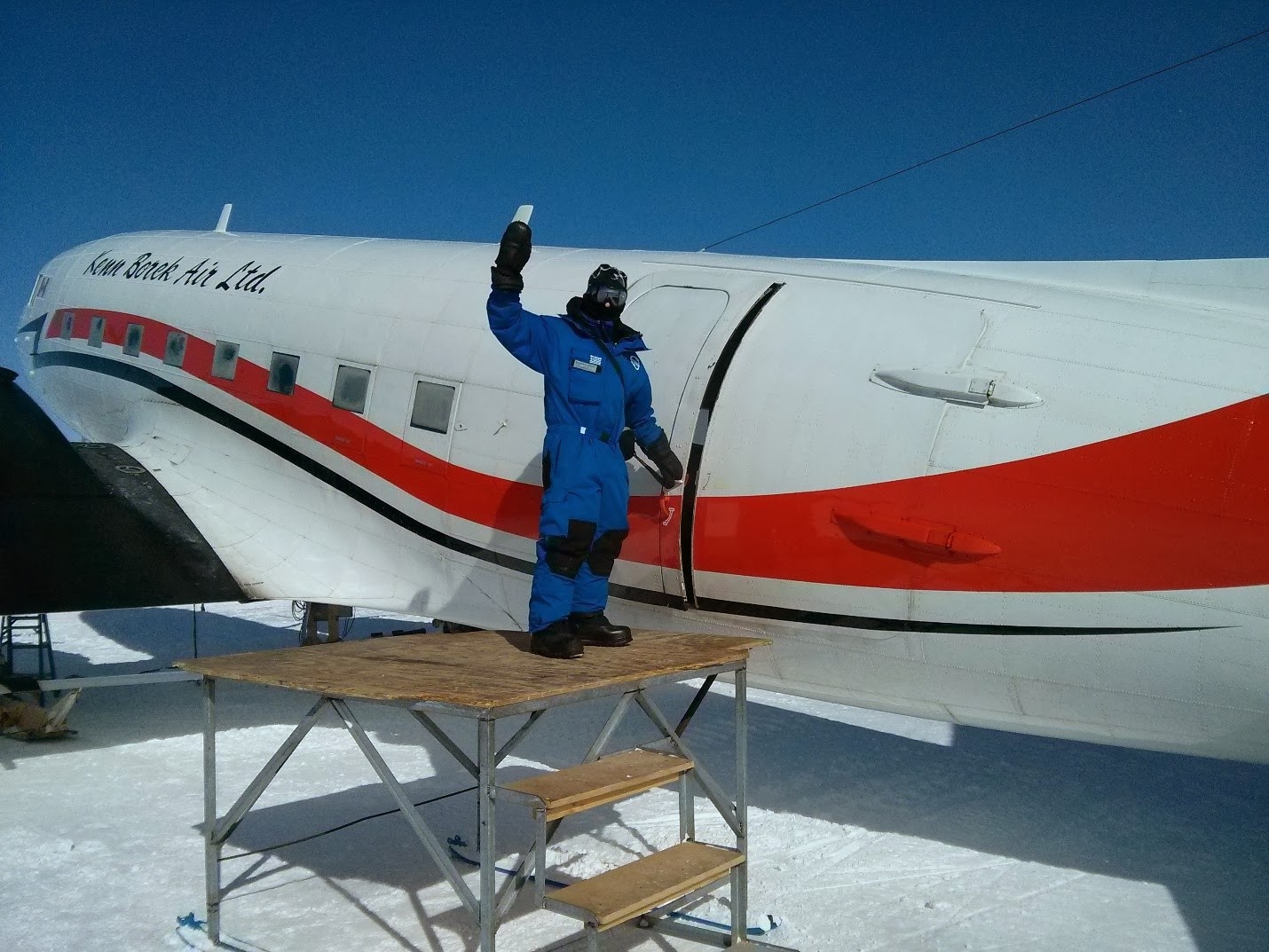 Picture #41: Last moments at Dome Circe for Evangelos
Next week I would rearrange and clean the ESA Lab at Concordia, my personal work space where medical research would be conducted. Fixing your first-ever professional office is a cool task to do, even if it lies as far away as Antarctica!

Winter supplies began to arrive with the next planes to the Station and we went outside to help with unloading several times. I had been outside the base only twice these last 12 days, total “EVA” time around 2.5 hours. So this third time out really felt like something, it was very refreshing. Although we finished the job of unpacking the goods in less than 20 minutes, I went on to take a small walk on the snow. The fact that the weather was bad was actually to my liking. It really felt like an Antarctic adventure and we marveled at the early explorers who made it to the Pole with clothing, equipment and communications far inferior to ours today. I hope that when they watch down on Earth from their eternal palaces among the stars, they will be content that humanity is slowly taming the wilderness that is Antarctica, for the first time with no weapons, no conquest, no wars, but with mutual understanding, cooperation and care about tomorrow. This is the very essence of our international Station, Concordia.

A few more peculiarities add to the Concordia experience: The extreme dryness is the prime cause of high static electricity, resulting in multiple little shocks per day when you touch the metallic handles of the doors! Computers are very sensitive to that too, so you always have to discharge yourself before you touch one, especially if you‘re wearing plastic shoes!

A new tradition developed in December was Sunday walks. A few of the crew would set out in the afternoon for a long walk often ranging up to 20 kilometers. This is great exercise and a hard endurance test, but you can bask with joy and self-assertion when you finish.

Throughout the austral summer, we all enjoy the shine of a million sunrays dancing in the air among playful ice crystals. This is the source of an interesting phenomenon called Phantom Sun or Sun Dogs, which we hope to witness again and photograph. Diffracted sunlight from ice crystals creates two false images of the sun that rise together with it. In some cases, a full halo can be observed. 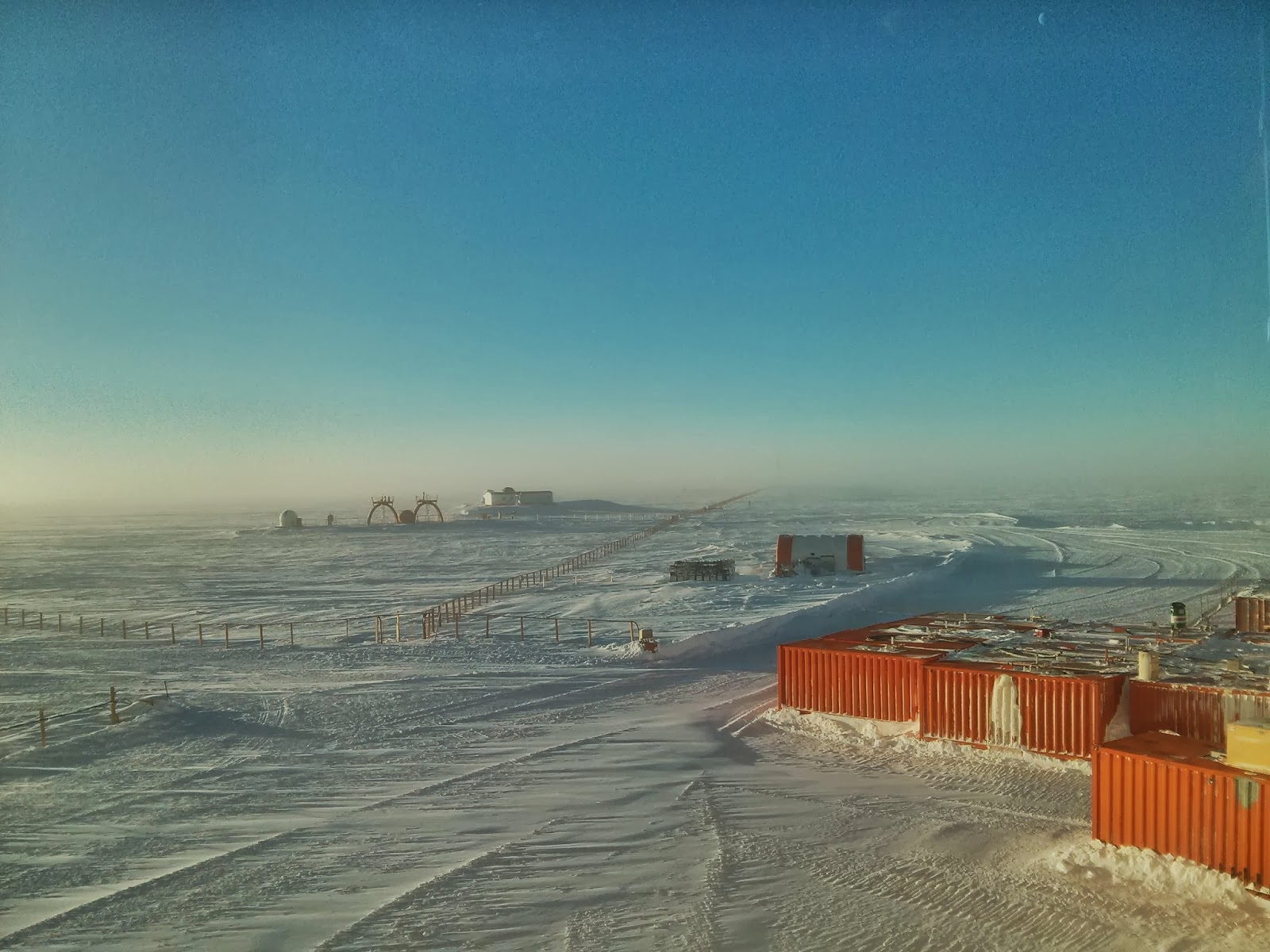 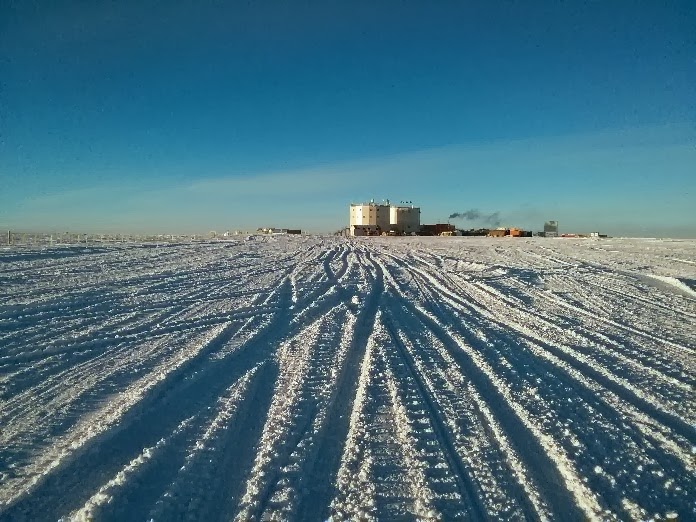 Pictures #42 & #43: Dome Circe at midnight and Concordia: The little home away from home

But to return to the arrival date at Dome Circe, that first night I was full of expectations – and a bit of fear. I was definitely stepping out of my comfort zone, and now that I was finally here I was elated – in the same time the old concerns over a year of isolation were revived in my heart.

With this I recalled in my thought the events of this unique day, the 9th of November: How we entered Dome Circe, landed on the ice, met our crew mates and had a tour of the base. In particular Evangelos’ welcoming words were imprinted vividly in my memory.

-         “Κανένας Έλληνας εδώ πέρα;  /  Anyone from Greece here among you?” he asked humorously as ten indistinguishable people in blue and red uniforms with masks descended from the plane.
-          “Για την ακρίβεια, ναι!   /  Yes, indeed!” I had answered happily. We embraced each other, unable to believe we had met after two years in the most unlikely of places, at the other end of the Earth.

Exhausted by travelling, lack of sleep and hypoxia, I still went to bed with a broad smile that night, content in the thought that this might have been the first dialogue muttered in Greek in the very heart of the Antarctic world.   ҉