Log Entry #6 – An Ocean of Feelings
On the 2nd of November I embarked on the longest journey of my life. And also on the most extended continuous stay away from my country, and from the world in general. It would be the longest I would remain in one single place, without travelling further than 5 km from it, for 1 year.

After saying farewell to my parents in my home town of Larisa, my brother Aris and I drove all the way to Thessaloniki, the second largest city of Greece, situated in the region of Macedonia. A few hours left, we tried to make the most out of the night and steal some great moments of amity from the relentless gods of Time. Fifteen of my friends, these luminous people that I am lucky to have close to me, joined us for the last night out.
Even though it was early November, luckily the weather in Greece was exceptional, as is often the case. This was a very nice and hopeful message for me, an ode to joy, and I’d like to meet the same sunshine when I return.
Thessaloniki is the perfect city to say goodbye to the world. Brisk, vivid, lively with young people and, for me, busking with colourful memories, like an amalgam of valuable gems. It is the city where I lived as a student in Medicine and began my training in the hospitals. As I looked upon the majesty of the Aegean Sea from the city promenade, leaving the world for an alien Antarctic outpost seemed difficult, for a moment. Luckily, a warm family of close friends was there to alleviate my spirits. 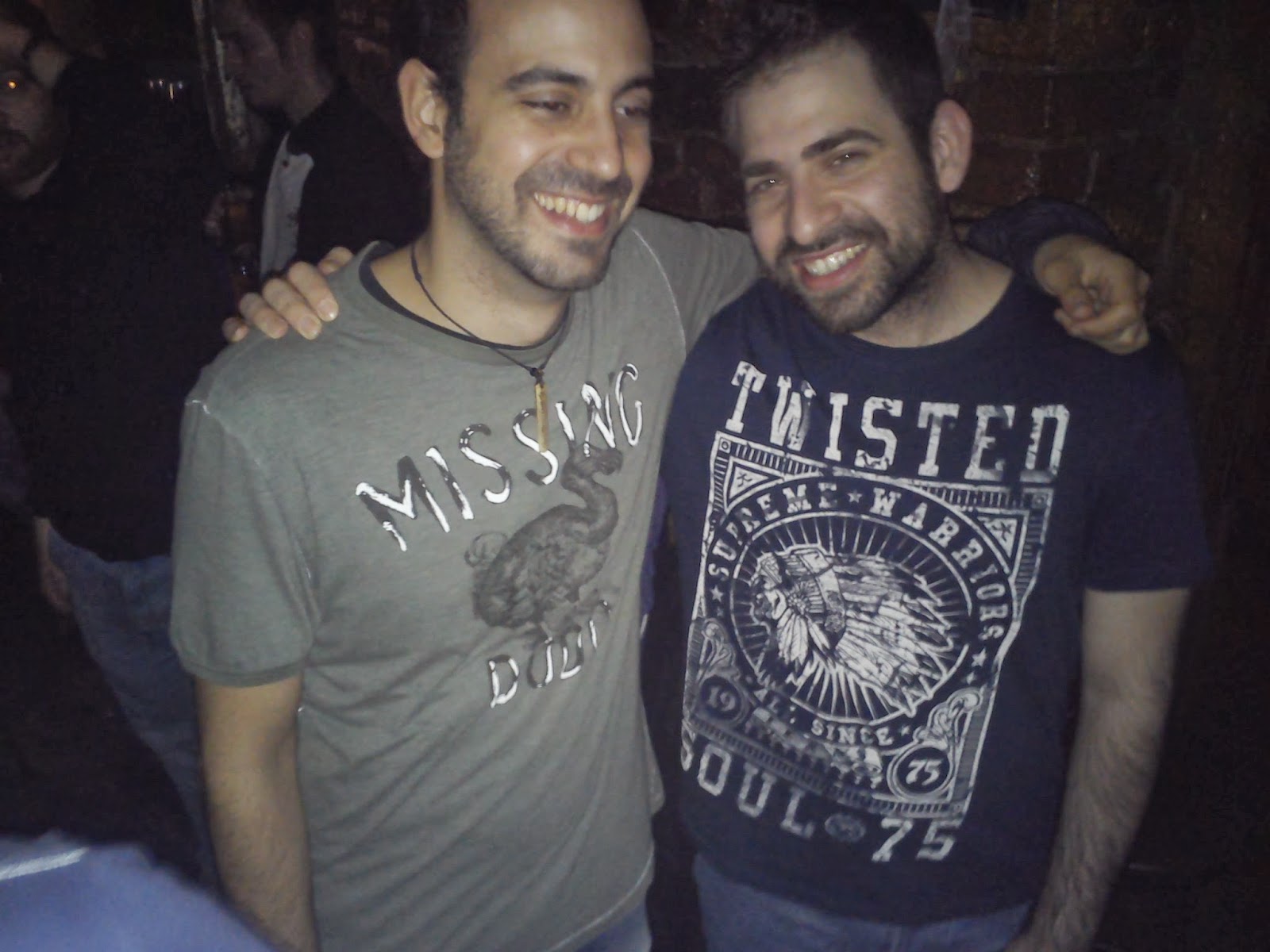 Picture #17: Last night out with friends [Credits: Vassiliki Ilioudi]
It was a hazy morning when we woke up and I knew it to be the beginning of adventures. Like a herald of destiny the clock was ticking, harbinger of the moment I would eventually part.
Saying goodbyes is a tricky habit. In general I tried to focus on the beliefs i myself have come to embrace: Concordia will be a life-changing adventure and one that is really worth living and hard to get. In the same time, I am "only" going away for a year. People have been through much worse in the past, because of such reasons as immigration or war...
Still, saying goodbyes is challenging, particularly for a person that used to be quite nostalgic, like myself. The taste of the last kiss from my girlfriend at Gare Part Dieu stays in my mind, as does the embrace of my parents. I carry the memory and blessings of many friends with me in their parting gifts, many of which are not to be opened for the next 9 months or so! The most difficult goodbye next to the one in Lyon was parting with my brother, with whom I share so much in life. A moving moment, but as he said, the feelings will be reversed next year.

Passing through (the first of many) airport controls at the terminal, the moment had come to embark on the voyage and join a crew of 13 in the frosty lands of Antarctica. There are two kind of crew members that sojourn to Concordia: Those that visit the Station to conduct scientific experiments or provide technical support in the summer, leaving with the last planes in early February, called the people of the Summer Campaign. And those who remain for an entire year at the Station, completing one overwintering at the centre of the Antarctic. We would belong to the second category, our team of 13 is a winterover crew identified as DC10 (initials from Dome Circe; the 10th permanent winter expedition).

Not all the crew would leave together, though. Olivier and me would be the first ones to depart, others would follow shortly or later, with the last of our team arriving in mid-January of the next year. Our trajectories would also differ, as we would set out from France, Italy, or Greece. In my case, I caught the first flight at Thessaloniki Macedonia airport, in Northern Greece. This would take me to Athens, where I would change planes to end up at Dubai late in the evening. After spending the night there, I would then venture forth to Bangkok, to catch a corresponding flight towards Sydney. The last leg of this trip was a flight to Christchurch, the New Zealand city whence many Antarctic expeditions start out, and the world capital of earthquakes (Picture #18).

There were a few funny moments during the journey. In Athens, for example, airport authorities called their counterparts in New Zealand a couple of times to confirm that I could enter their country on my way to reach Antarctica! In general, traveling to the southern ices is an uncommon practice for Mediterraneans and I beheld the strangest looks in peoples’ eyes when I flashed my passport in the counters and answered the “Hello, sir, final destination?” with “Well, Antarctica”. 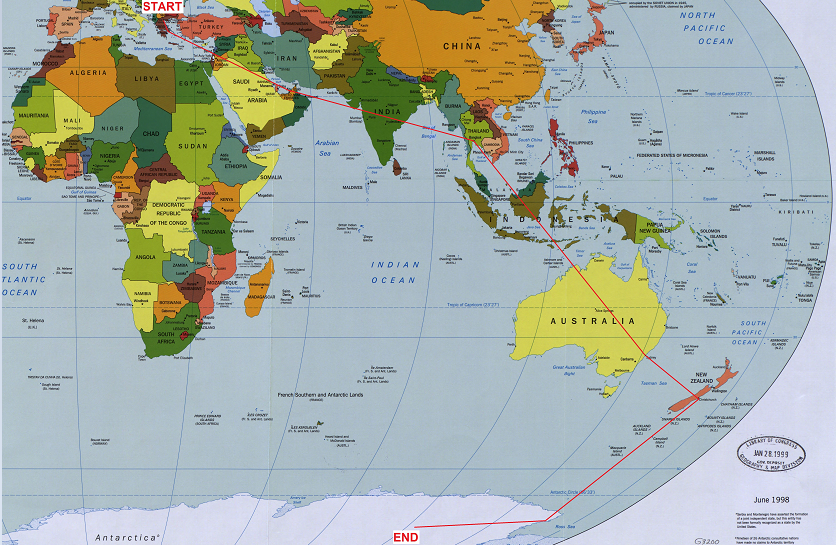 Picture #18: Journey to the End of the World [Credits: Adapted from Wikimedia]

Once at Christchurch, I was taken to a hotel and met a lot of people who would journey to Concordia Station with me for the Summer Campaign. Two big bags, full of special polar clothing, delivered from IPEV, were also awaiting me. Unfortunately, I did not have the time to enjoy the beauty of Aotearoa nor visit such places as the legendary café where Captain Scott resided before his expedition. I’ll save the eagerness for the return journey…

For those who have watched Francis Ford Coppola’s film “Apocalypse Now”, you might remember that the first chapter is entitled “Waiting in Saigon”, and the main character passes his time merely in waiting for the action to happen. This would be our feeling over the next week at Christchurch. Every morning we would wake up early and prepare ourselves for the possibility of leaving for Antarctica, yet every time due to bad weather conditions at the icy coast, our flight would be postponed.

Finally the day came and half-dreaming we were led to a special Antarctic terminal in Christchurch airport. The flags of all the signatories of the Antarctic Treaty were hanging on the ceiling and I was happy to see the Greek flag among them, as well as the flags of many European states.
Clad in our Antarctic outfits, we were boiling inside amidst the temperate New Zealand weather. Another funny moment came to pass as I forgot my sunglasses, gloves and hat in my luggage! I was definitely a rookie and showing it. Luckily, after short negotiations, the guard let me in the luggage area to search for my equipment and wear it – I would not enjoy arriving in Antarctica without a good pair of gloves and goggles. Next stop: Mario Zucchelli Station, then Concordia.
Traditionally seafaring explorers were accompanied by singing mermaids in their journeys. Not us! The only prevailing sound that ringed monotonously in our ears inside the hull of an aged C-130 was the cacophonous minstrel lurking in the spirit of our aircraft’s engine. 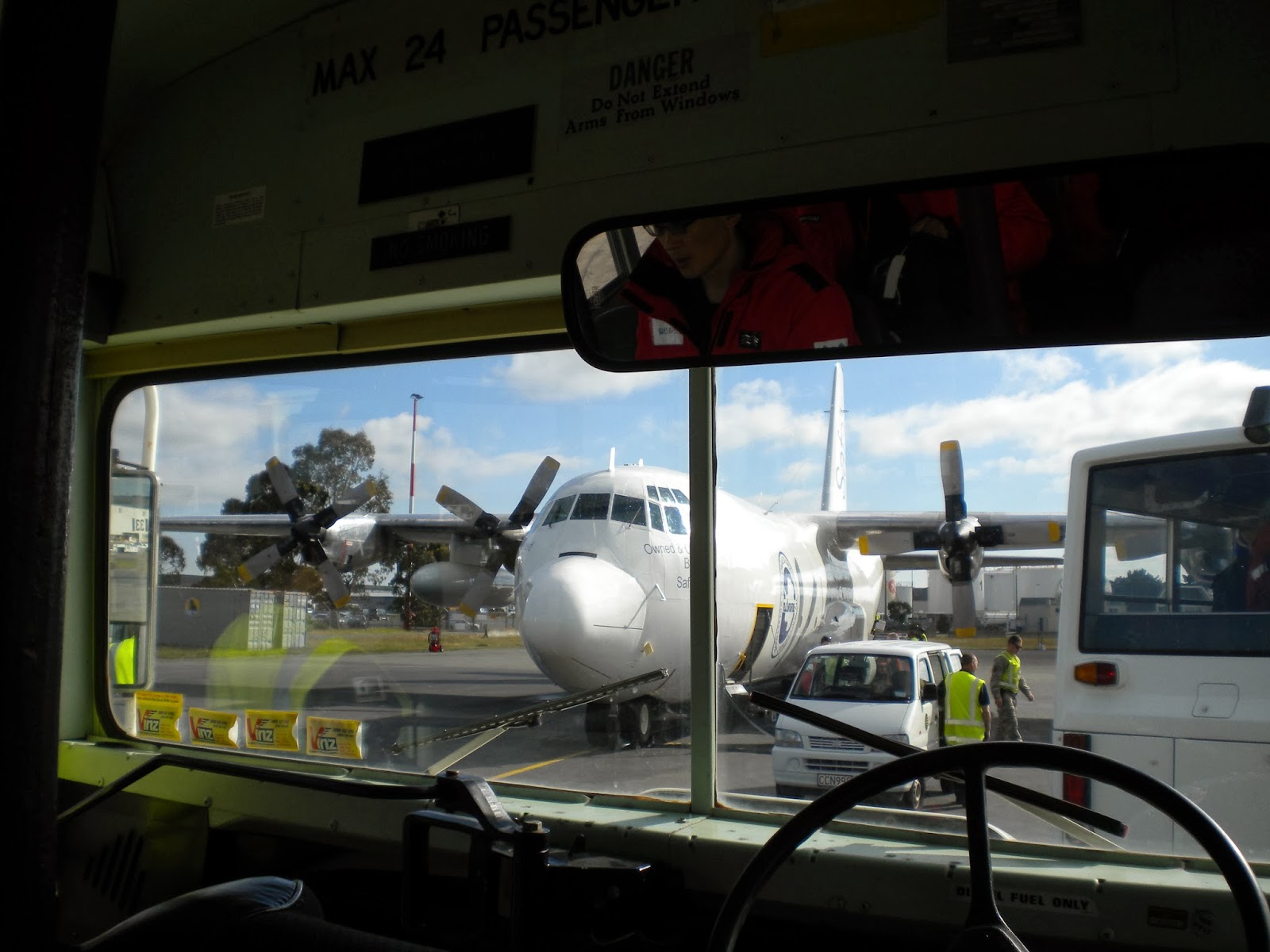 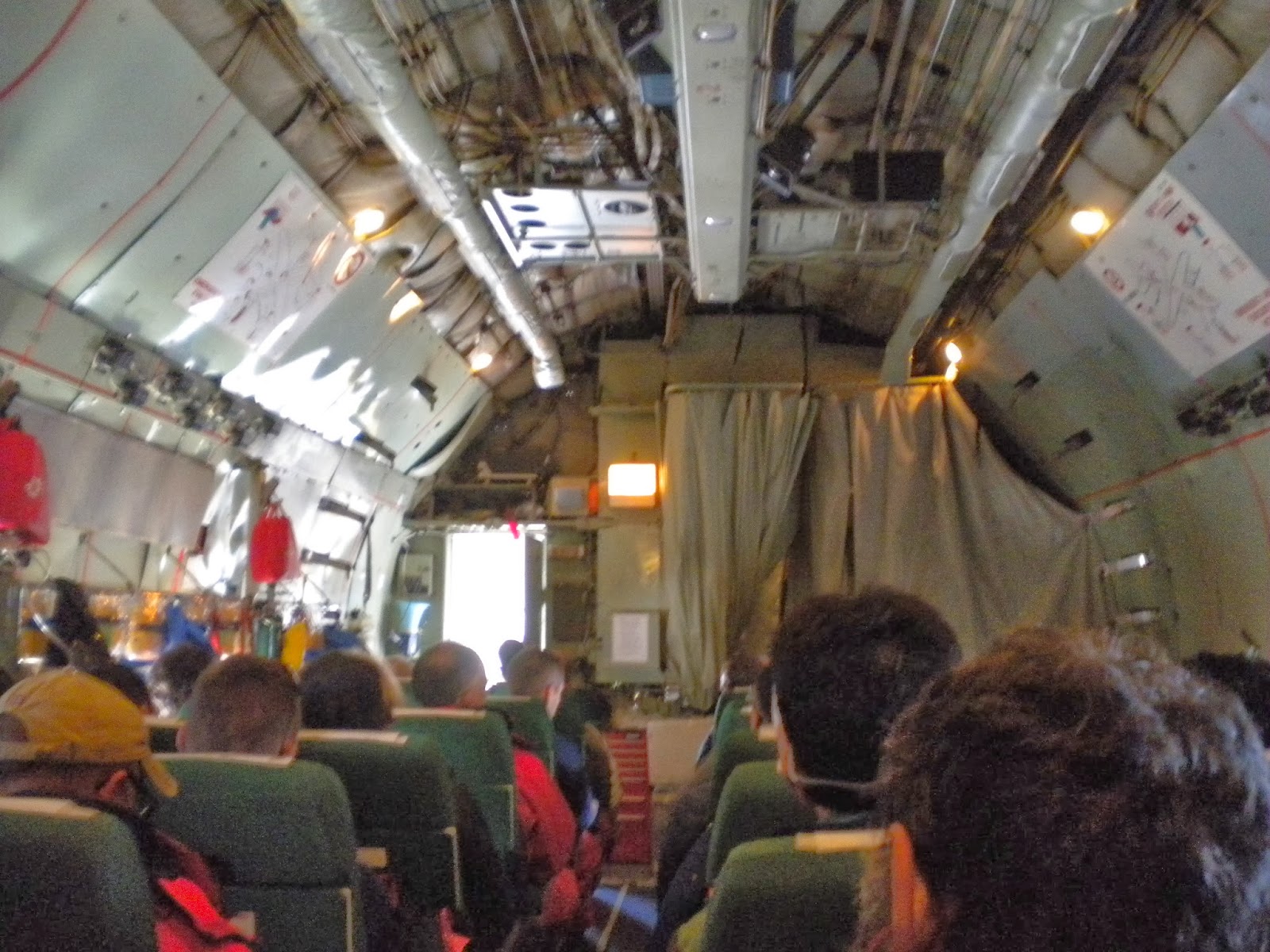 Eight hours of heavy noise in the belly of an iron bird with tiny windows and extremely limited space is hardly a hearty welcome to the 7th Continent for those seeking luxury and ease. But the view we caught when we finally touched down on the ice at Terra Nova Bay was totally worth it. You could immediately spot the differences between those that had been in the Antarctic before and the new recruits, myself among them. Olivier and Giorgio seemed to be at home, me, I wondered 5-6 times if I wore my gloves correctly or if i must change my sun mask. The rest of the time I did naught but take photos, capturing the white majesty of the landscape and still trying to believe that our weighty plane landed on just ice, that is, on the frozen sea! I later learned that the ice shelf was 2.5 m thick, with no Earth underneath it, and in a couple of months it would completely melt away as the austral summer gained, only to reform under the influence of the frost deities in the winter.
The temperature was around -14 degrees, a bit low for a coastal area at this season. Meme comme ça, as we say in French, we all enjoyed the great hosting of our Italian friends at Mario Zucchelli Station (MZS), our middle stop on our way to Dome Circe. We were carried to the base, some by jeeps and some by helicopter. While most of the Concordia crew left a few hours later, Olivier and me, who were to spend the entire year at Concordia, lingered at MZS for 3 days. I remember every meal at the Italian base included pasta; also I spotted skoua birds for the first time. 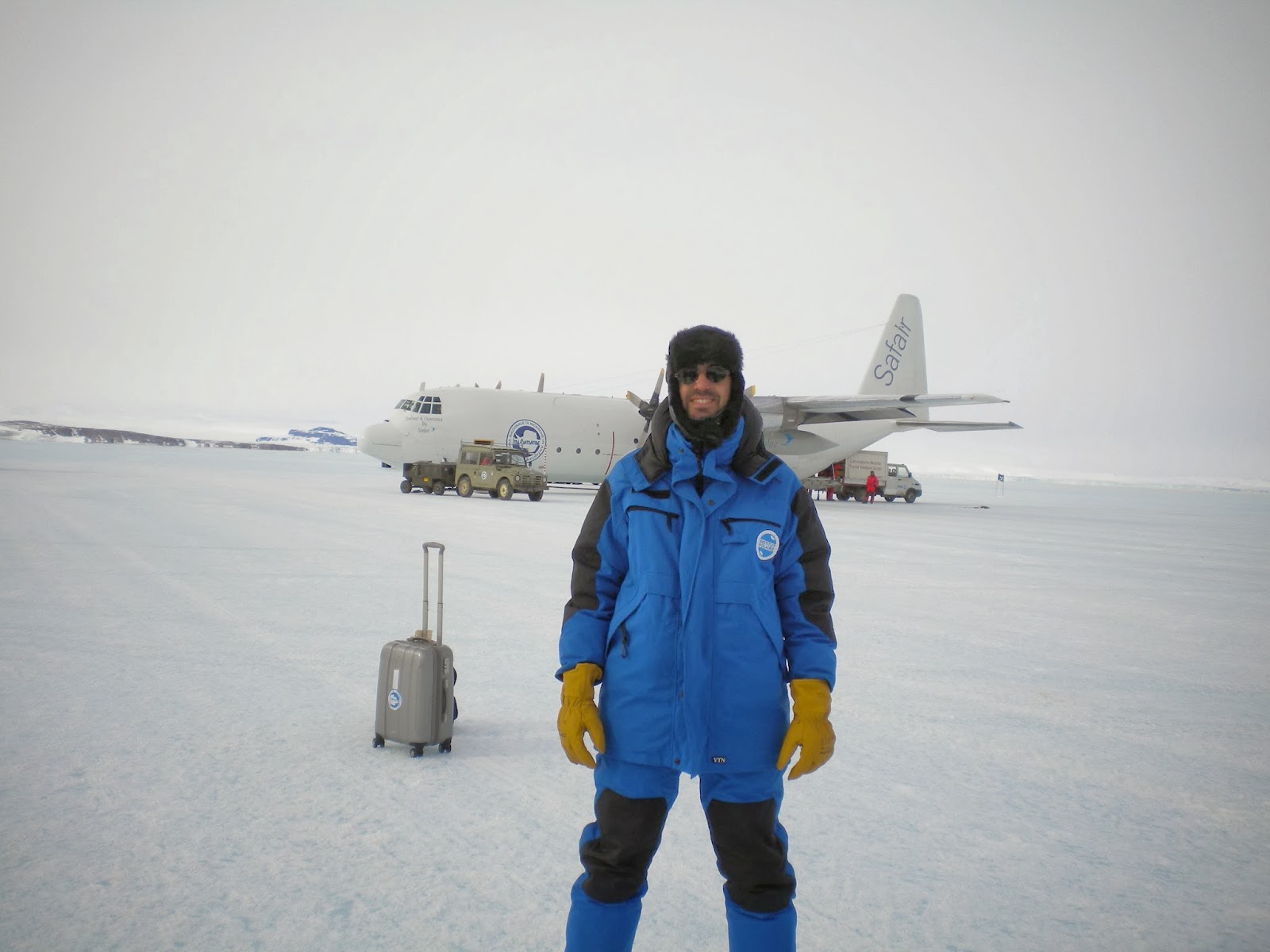 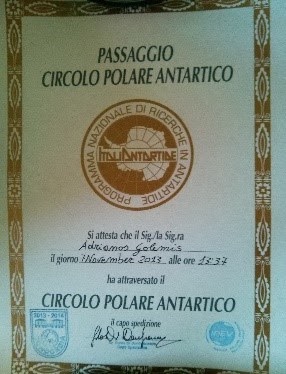 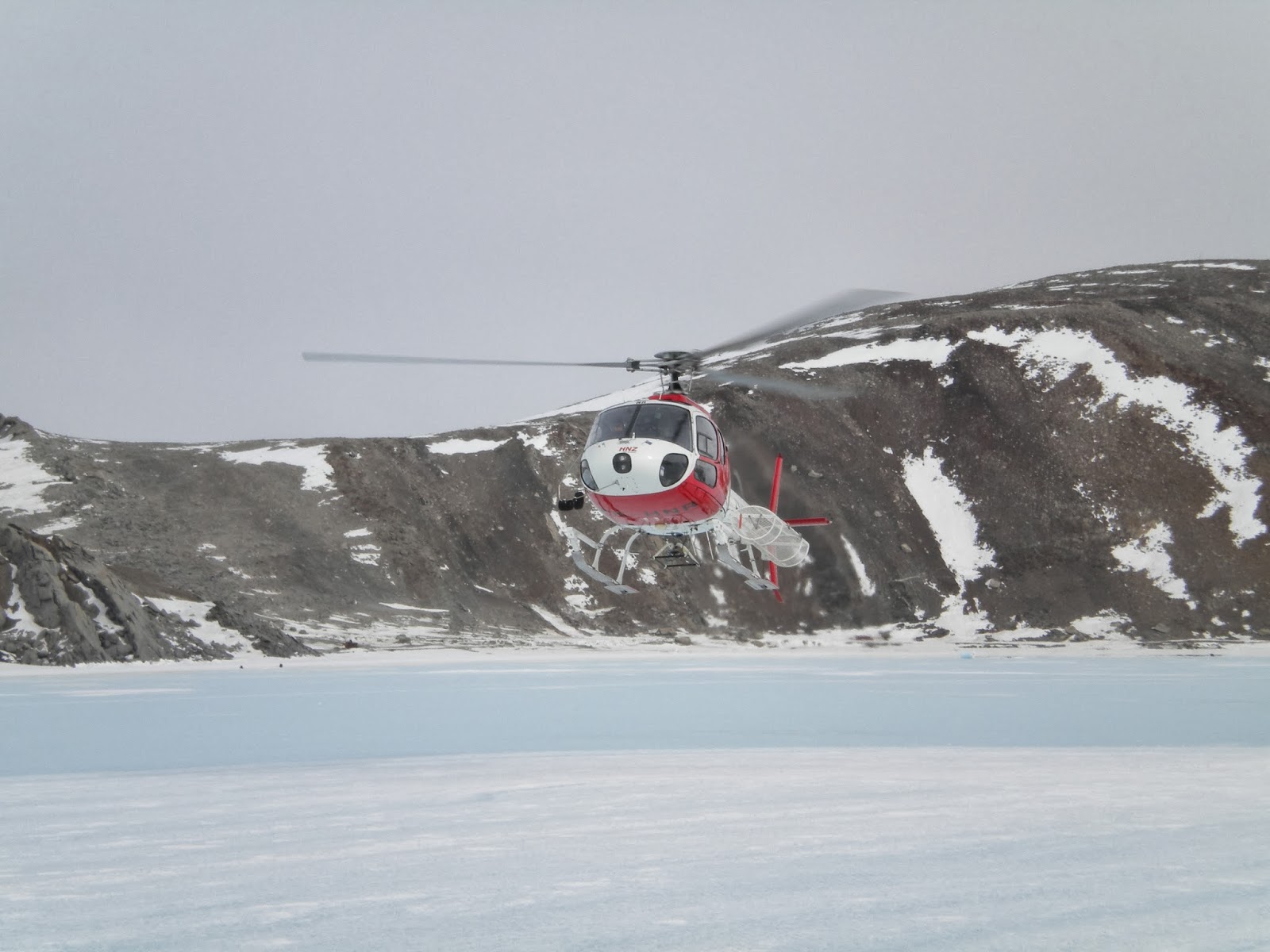 Pictures #21-23: Left – Landing on the Ross Sea   Centre –  Certificate of crossing the Antarctic Circle
Right – A helicopter transport from MZS in rendezvous with the newcomers
It was the 7th of November when I entered Antarctica at Terra Nova Bay, near the Ross Sea. I felt immediately that I had made the right choice to come here. Later I would get my official diploma for entering the Antarctic Polar Circle (Picture #**). The journey would be over soon.   ҉ 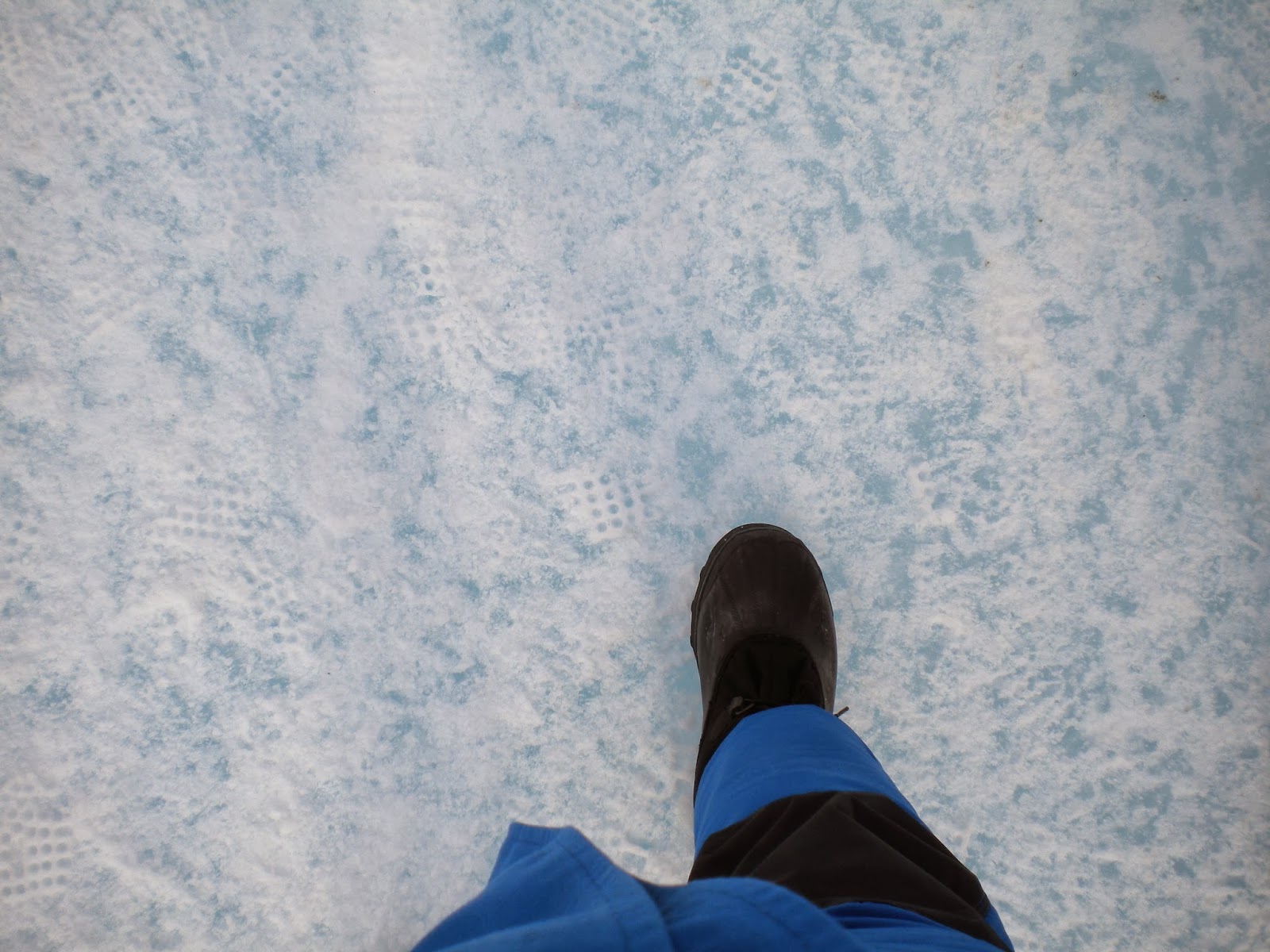 Picture #24: My first step into the realms of white