Log Entry #12 – Estrellas do Sul
(Astronomy, Part One)
Intro:
{ Hello, world. It’s been quite a long time without writing, in part due to an increasing workload and in part due to our new interests here at Concordia Station. For me one of these was taking my first steps into programming, whence the first sentence quoted here is inspired. Also, there are more songs in this entry, as music can really lift your spirits any time and we do enjoy it greatly during our isolation. Let’s start immediately with a theme related to the content. Hope you enjoy it. }

Living in the Antarctic Continent for one year, a “winterover” in isolation from the rest of the world (save for a low bandwidth internet connection) can sound challenging. Indeed in our tiny European research Station of Concordia, laying in profound solitude amidst the infinite white of Dome Circe, Antarctica, the challenges can be many. Yet there are also great rewards for those who decide to spend a year at the edge of the world.

Prime amongst them is the delight of enjoying some of the world’s unique phenomena. Daylight is continuous when you arrive, during the austral summer. This might give you a great lot of trouble to sleep, but is indeed quite a stimulating event to witness endless days of a never-setting sun. Viewing sunspots with a telescope and proper filter entertained us a few of those summer evenings.

But the real joy in astronomic observations lies in the majesty of the virgin night skies above Concordia, almost another pristine realm unveiled, to mirror the one we live in, in Antarctica. It is dubbed “the world’s clearest sky” and as soon as the night arrives, it is a marvel to behold.

The first time I exited the base in the night with my friend Paride we were almost shocked. With no light of any kind, natural or manmade, other than the illumination of our own base, darkness engulfed us as we stepped into the gloomy surroundings. It was a deep and primordial feeling that I came to appreciate once the original “shock” was lifted. In a way, it must have resembled an EVA (Extra-Vehicular Activity) performed by astronauts in space, when the spacecraft airlock opens and they find themselves hovering under the pitch black heavens. It can be fascinating to think that some nights while you sleep, astronauts “walk” into space above you.

In Greek, my mother tongue, a human being is called “άνθρωπος”, [anthropos]. It has been suggested that etymologically this derives from “άνω” [ano] + “θρώσκω” [throsko], which means, “looking upwards”. While this is somewhat contested by contemporary etymologists, I recall very clearly the innate impulse to turn my eyes towards the sky at that very moment when I stepped outside Concordia Station encircled by the pure darkness that must have been what ancient Greeks described as Erebus.

Stargazing and astrophotography have always generated deep feelings in me. It was the prime reason that I joined the Amateur Astronomy Club of Thessaloniki (OFA), with whose members I enjoyed many sleepless nights watching the skies and pondering when Betelgeuse might explode as a supernova, bathing the Earth in light perhaps as strong as the Moon’s. Now the OFA flag is waving at the extreme south too (Picture #53). 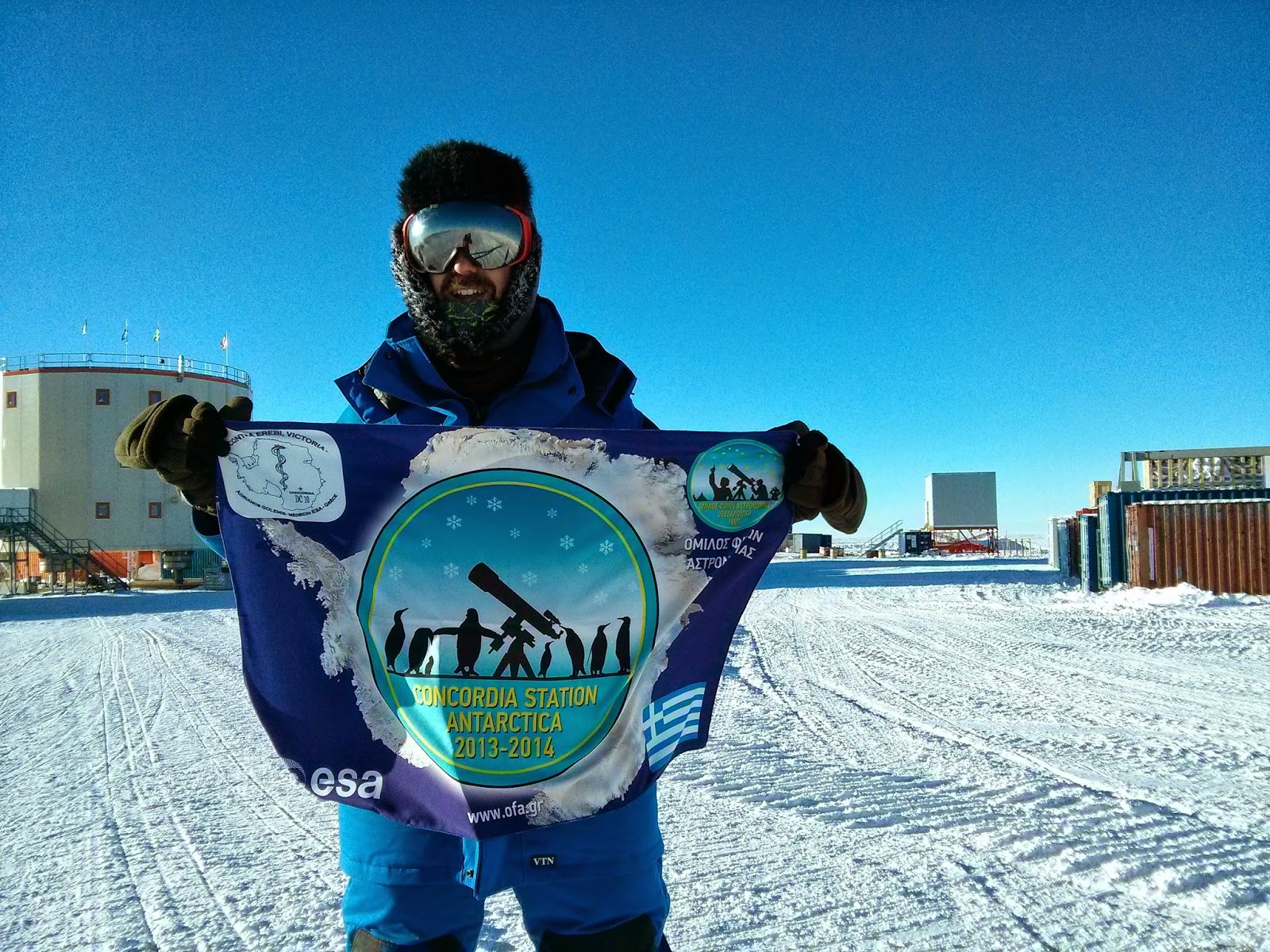 Picture #53: The emblem of OFA in the extreme south (Omilos Filon Astronomias Thessalonikis)

Yet in the wilderness of Concordia it is harder than imagined to enjoy the experience and produce good quality results. The temperature was -60 degrees C on our first stargazing attempt and has fallen to -75 since. In this ambient, even if dressed with your entire polar equipment (I remember it took us some 20 minutes to fully prepare before exiting), your fingers and toes will start to freeze after a mere stay of 20 minutes outside. It is remarkable how frost penetrates all the layers of your two (or three) pairs of gloves to attack the most vulnerable spots on your skin, the limbs, which have less blood circulation than your torso. A silent enemy.

On top of that, our masks become quickly blurred, hindering our vision, as our own respiration creates local humidity that freezes around it. I could not resist but remove it to capture a glimpse of the glory of the world’s darkest skies. But it is then not long before your eyelashes freeze as well – and if you‘re using contact lenses you‘re always scared of them freezing in your eye.

Our cameras suffered equally. Battery life was reduced to some 40 minutes, while my tripod became rigid quite rapidly after exiting the Station. Soon aiming became impossible and the camera’s screen also gave way. For these reasons we went inside every 15 minutes, to warm up the equipment – and ourselves! I remember my skin being “burned” when I foolishly touched my camera bare-handed; naturally it takes quite a long while for its metal parts to reach room temperature after a long exposure to the cold. The only good solution to achieve quality pictures of the sky from Antarctica seems to be teleoperation. Creating a wooden box with a small internal heater for the camera and using a wire to operate from the cosy interior of the base is now our new priority. Thus, apologies for not decorating this article with more impressive celestial photos.

By the way, if the first song is over, here’s another one, with a fitting pic to accompany it: 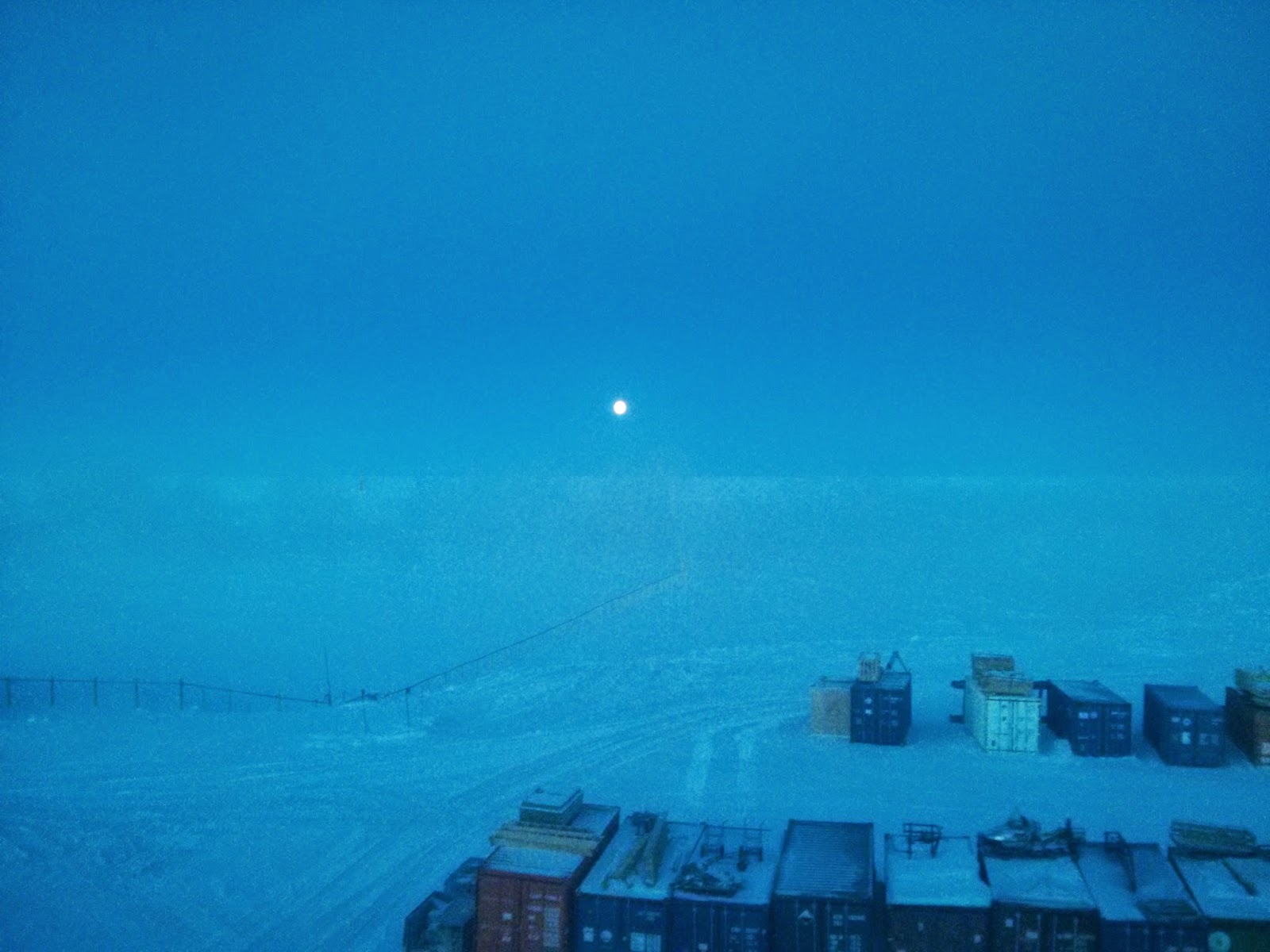 Still I will never forget these great moments of ecstasy when walking on the ice under the total blackness of the sky. My eyes strove to recognize familiar patterns – the southern constellations, Estrellas do Sul as my friends called them during my first encountered with the Southern Sky in Brazil. I always liked how this sounds.

Yet the celestial dome here above us is so translucent that thousands of luminous points litter it with light. The most prominent ones stand next to those that you can probably not view from any other place in the Earth with the naked eye. It took me long to recognize the Southern Cross and I did confuse it with the False Cross (δ Velorum, κ Velorum, ι Carinae, ε Carinae), even though I was already aware of this common misidentification. Next I saw the Pointers (α Centauri or Rigil and β Centauri or Hadar), which as I learned in the online astronomy course of Haritina Mogosanu, can be used together with the Southern Cross to spot the South Celestial Pole (you can find more about this course here: http://stargazing.xperts.co.nz/). In the North, the pole is marked quite accurately by a major star, Polaris (α Ursa Minoris), but here in the South the only stellar marker is the rather dim (as seen from the Earth) σ Octantis. 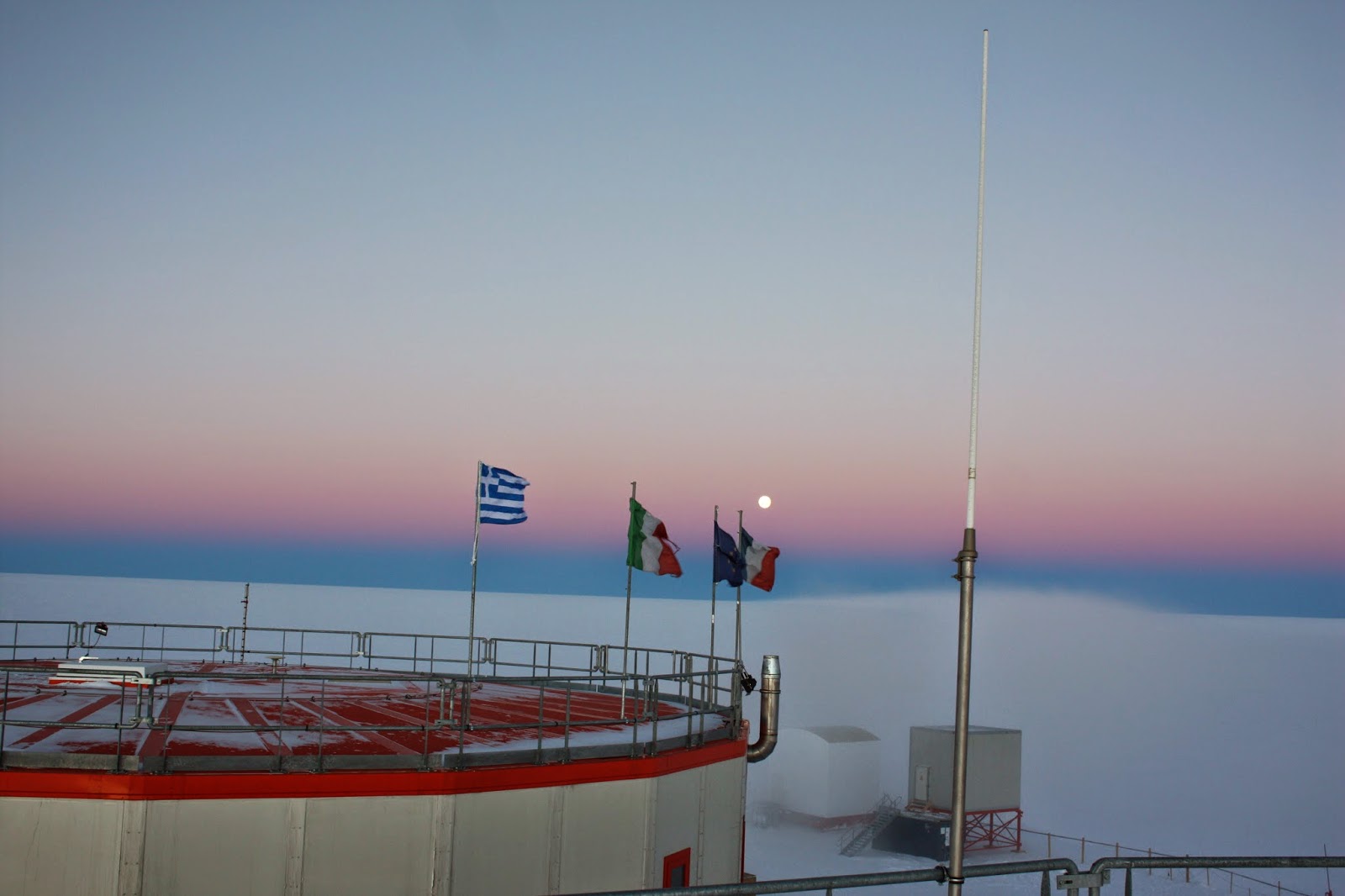 Picture #55: Lunar encounter with our flags on the Station

Regor, Canopus and Achemar were there too, but I felt a particular affection when I spotted Sirius, a “familiar face” for us citizens of the Northern Hemisphere. It seemed like this twinkling star together with its companion, Procyon, had travelled all the way to the extreme South of the world with me. I felt content with this thought.

Later I recognized Fomalhaut, a major star in the constellation of Pisces, and I remembered my good friend Panagiotis with whom I made my first stargazing trips. On a clear night like this, but very far away, we had used this star to align our telescope with the sky – the next day we learned that an exoplanet was detected orbiting around it. Stay tuned – more on Astronomy soon!