May, the start of the long polar night. Three and a half months without viewing the face of the sun, so revered through human history and mythology, began a week ago. As we keep in contact with friends and relatives in Europe it is strange to picture them wearing shorts and T-shirts. A waxing summer for them. A dark winter for us. But the impending darkness is not necessarily an enemy. As the light wanes, more and more of the jewels of the skies are revealed before our eyes.

On another stargazing exodus from our base, I was truly elated when my sight fell on the Magellanic Clouds for the first time, two deep sky objects that are in fact satellite-galaxies of our own Milky Way. I have been longing for this spectacle during my first trip to the southern hemisphere, but all five nights that I spent away from the ominous city lights were cloudy ones. These two dwarf galaxies took their name from the great explorer Magellan himself, as it was his accompanying astronomer who made this knowledge widespread in Europe – although it had been the Persian scientist Al-Sufi who allegedly first mentioned them in text.

We feasted our naked eyes on this sight before quickly covering up every inch of our skin with our masks again. Then, our own Galaxy came on the stage to steal the show. Never have I seen before such a clear natural image of the Milky Way on any night. It is said that the Milky Way is thus named because it originated in the milk spilled from the breast of Hera, as she awoke from her sleep, surprised to find new-born Hercules feeding on her (and this was the secret plan of Zeus to make his son immortal). This trace back to ancient mythology made me realize that we were viewing the skies as our ancestors did millennia ago: unscathed by light pollution and artificial illumination. This was the great gift of Antarctica to our senses, to compensate for the cold.

African tribes of yore had pictured the Milky Way as the backbone of the sky, an interesting concept if we consider that our Galaxy appears as a line in the very centre of the sky in equatorial latitudes. 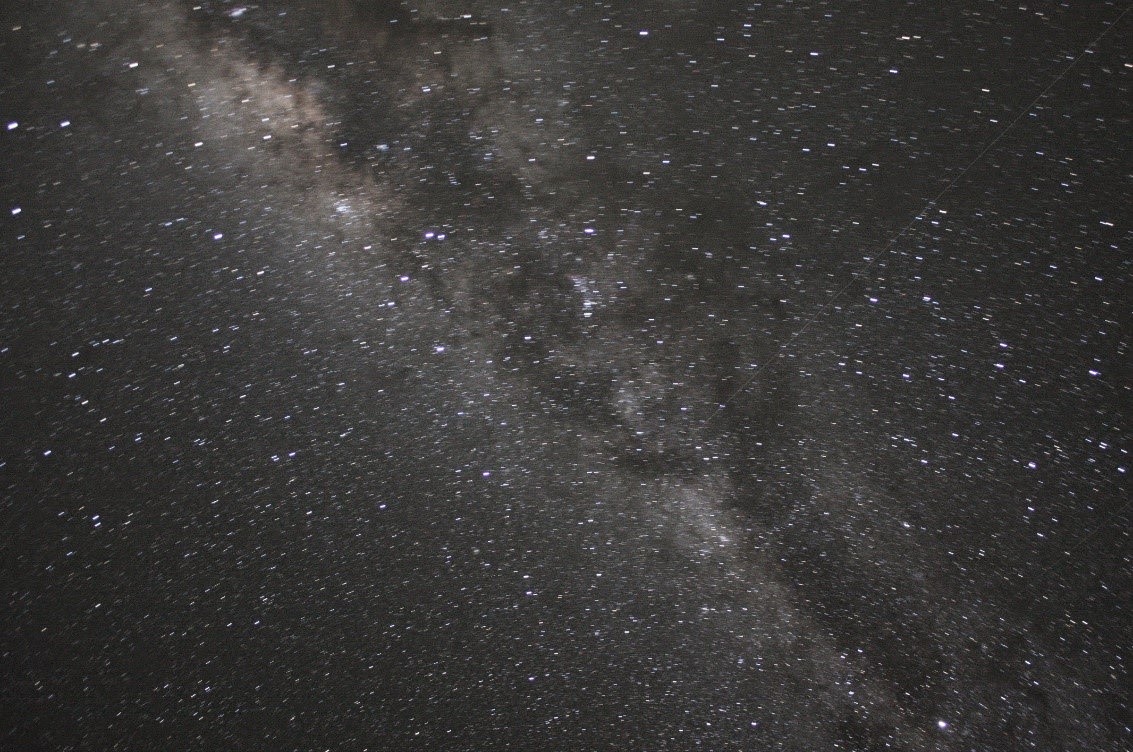 Picture #55: The Milky Way above Concordia Station, never alone in the company of the Magellanic Clouds

There are days (so to speak, as we now live in 24-hour darkness) when the lords of the skies are generous with us, revealing all their hidden treasures of eternity to the peeking eyes of us mortal observers. And then again there are moments when they shut their realm away. This was almost the case with two eclipses in April 2014. On the 15th day of that month a lunar eclipse took place, but we managed to photograph it only marginally from the interior of the base, as the horizon was hazy and obscured the event (Picture #56). Not an excellent spectacle I’m afraid, but you can perhaps depict the shadow of our Earth sliding away gently atop the surface of our closest world, one that we have come to simply call “The Moon”.

Then a partial solar eclipse occurred two weeks later (and that is, two exact weeks, because a lunar eclipse can only occur on a full Moon and a solar eclipse only on a new Moon!). On the 29th of April 2014 we organized a small expedition to grasp what images we can from a phenomenon that could be christened “no man’s eclipse”: Total coverage of the solar disc by the Moon occurred only in a location in Antarctica where no manned base existed. No human would witness this event with bare eyes. We should all be content with the partial phase. But again, our plans were thwarted. A foggy horizon and low temperatures, combined with limitations because of our location with respect to the eclipse’s ground track left us with naught but a few wide-angle photos made by our friend (and quite accomplished photographer) Paride. The rest of us did not manage to capture a single image due to equipment failure, even though this time we had commandeered the Station’s auxiliary telescope and built a larger solar filter for the event. 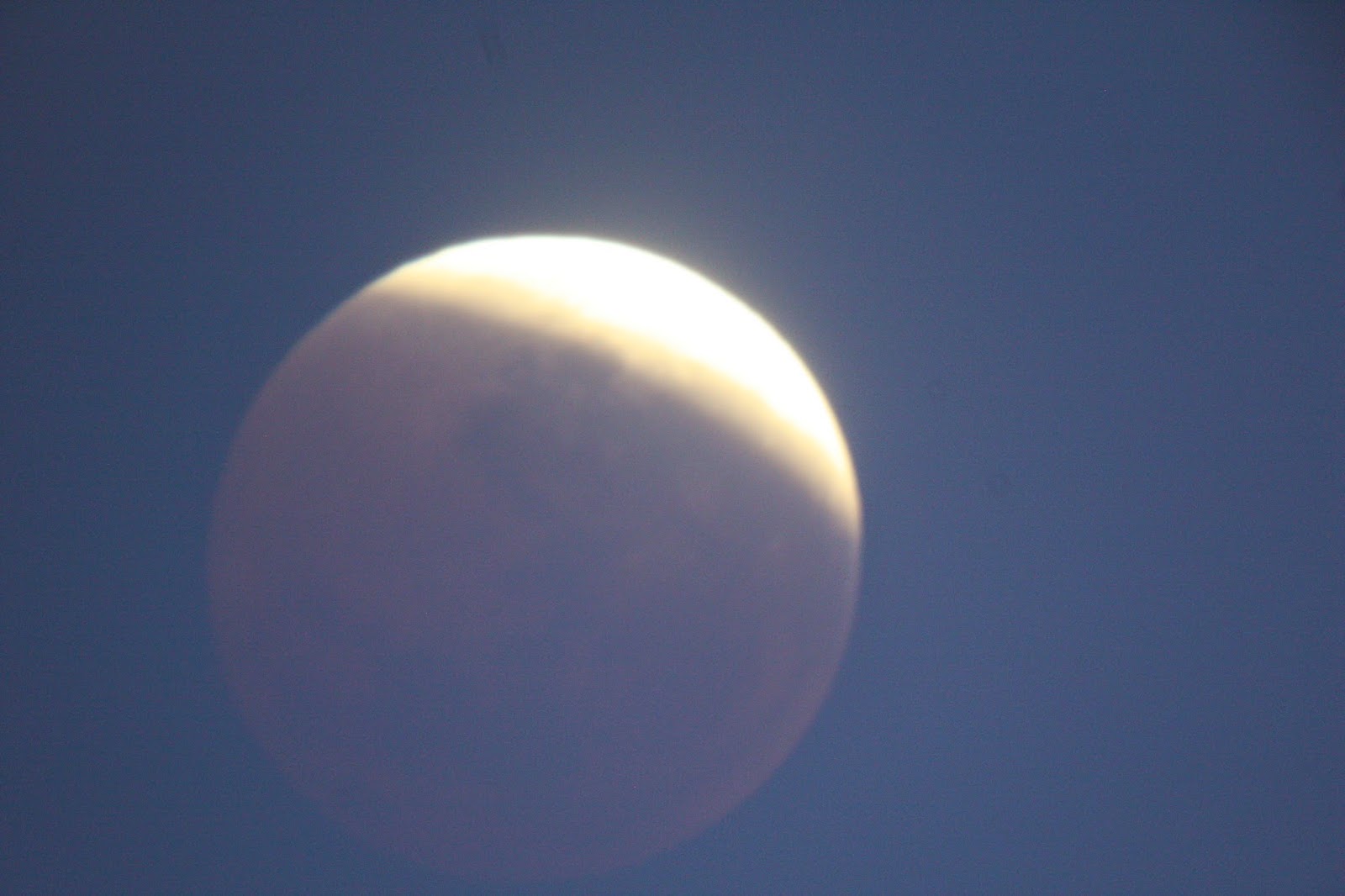 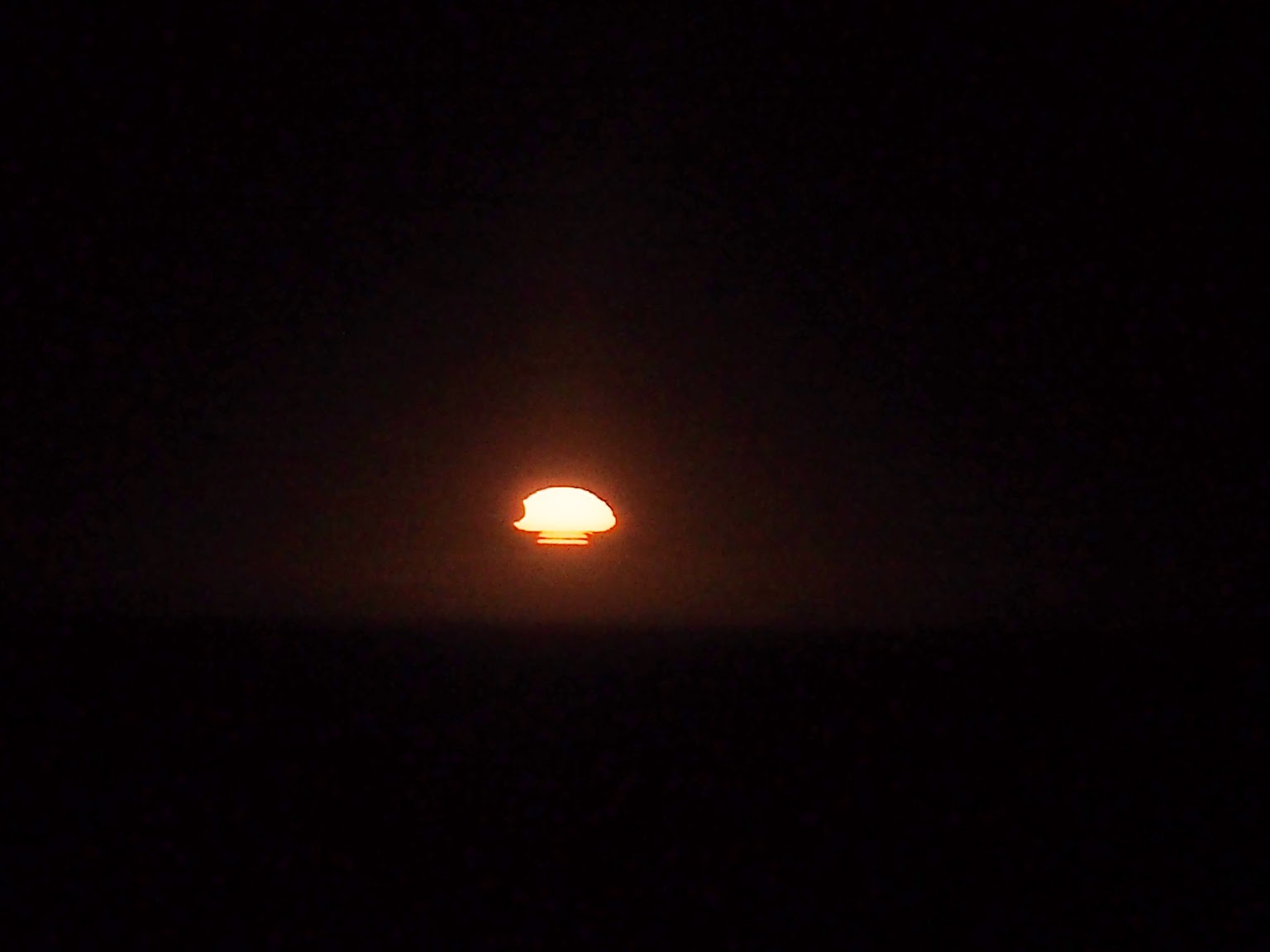 Pictures #56 and #57: The Moon and the Sun play hide-and-seek with our planet
[Credits: Paride Legovini]

Now the greatest spectacle that every newcomer to Antarctica anticipates is to see the Aurora Australis. Unfortunately this is a phenomenon only visible near the South Magnetic Pole – SMP – (and not the geographic one). The SMP has been moving constantly northwards in the last 500 years, in fact currently it lies off the coast of Antarctica, not even on the continent itself, and thus some ~1200 km from our location. This means that coastal stations like Dumont D’ Urville enjoy magnificent nights, bathed in the green and purple of the Southern Lights frequently, but in our case we can only hope for a few (2 to 10) viewings during an entire year here. Still, I expect that even one would be enough to stir feelings of fulfilment in us.
There are yet other unique spectacles to behold in the crystal skies of Antarctica. I truly hope that as the night waxes and the light wanes we will be able to spot the zodiacal light on the anti-solar point on some occasions. The gegenschein is a similar phenomenon, both of them faint light radiation normally invisible from metropolitan areas or even from rural countryside.

During the long summer day we had the chance to observe a phenomenon known as the Phantom Sun or Sun Dogs (Picture #58), two small rainbow-like formations that escort our star during sunset or sunrise, a manifestation of light as it dances among the snow crystals before being finally captured by the rhodopsin in our eyes. With a little imagination you can picture a whole halo surrounding the sun as well.

But the sun is now long gone, leaving us in a shroud of an ever increasing obscurity. Yet darkness is not always an enemy. It can be welcome to thoughts. After all, darkness is just an unknown. As there are so many unknowns hidden in the jewels of the sky, awaiting our inherent curiosity to awaken their marvels, so the night with its darkness are inviting to exploration. I am confident that the upcoming 3-month long nighttime will thus be another stimulating experience, a healthy challenge rather than a gaping chasm in our psychology and an excuse for low performance.

Sometimes I think that there is more to be discovered in the night than can be grasped during a clear day, when the infinite sunlight surrounds us, but also renders us blind to the small, colourful minute details of the skies. 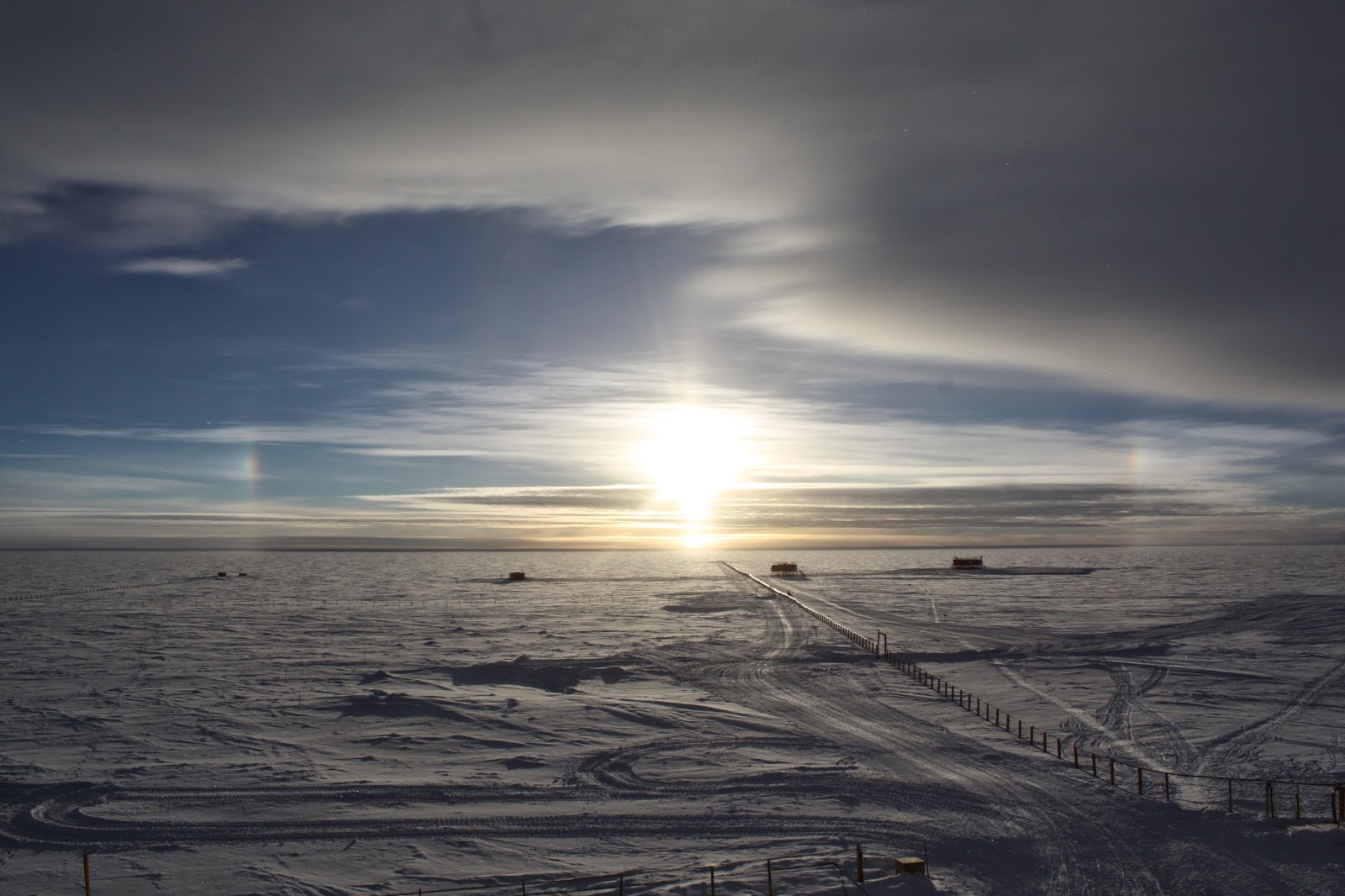 Picture #58: The Phantom Suns, one on each side. This picture was announced
Earth Science Picture of the Day on July 3, 2014, at epod.usra.edu/blog/ .

And I remember – it is in the night that we can see the stars. Those that comprise our close neighbourhood, like Proxima and Rigil Centauri, and those that stand at an unimaginably gigantic distance away. And we can ponder in silence about the potential worlds that orbit these little glow worms of the sky, some of which might even host life not so different than our own.

In a way, the sun during the day directs our attention to ourselves, within, upon the Earthly things and pragmatic needs of the day. The tune of the night can instead be called a song of extraversion and visions. A focus on what is still to be known, grasped, fathomed, analysed, explored. A dream of what is yet to come and a reminder of the efforts needed.  A sea of tranquillity and yet a sparkle of challenge to reach higher. Less accuracy maybe, but also less discrimination. A fertile ground for coming together in union in awe of the unknown, exploring further, touching the limits.

The skies are calling… Yearning to be explored by our species.

And to the little crew of Concordia Station, like to the hunters of yore, darkness signals the time for stargazing. It is obvious to us that with the darkness, the hunting season is come.

The Time for Star Chasers has arrived in Antarctica.

With this parting song, I wish you all Good Night.
҉ 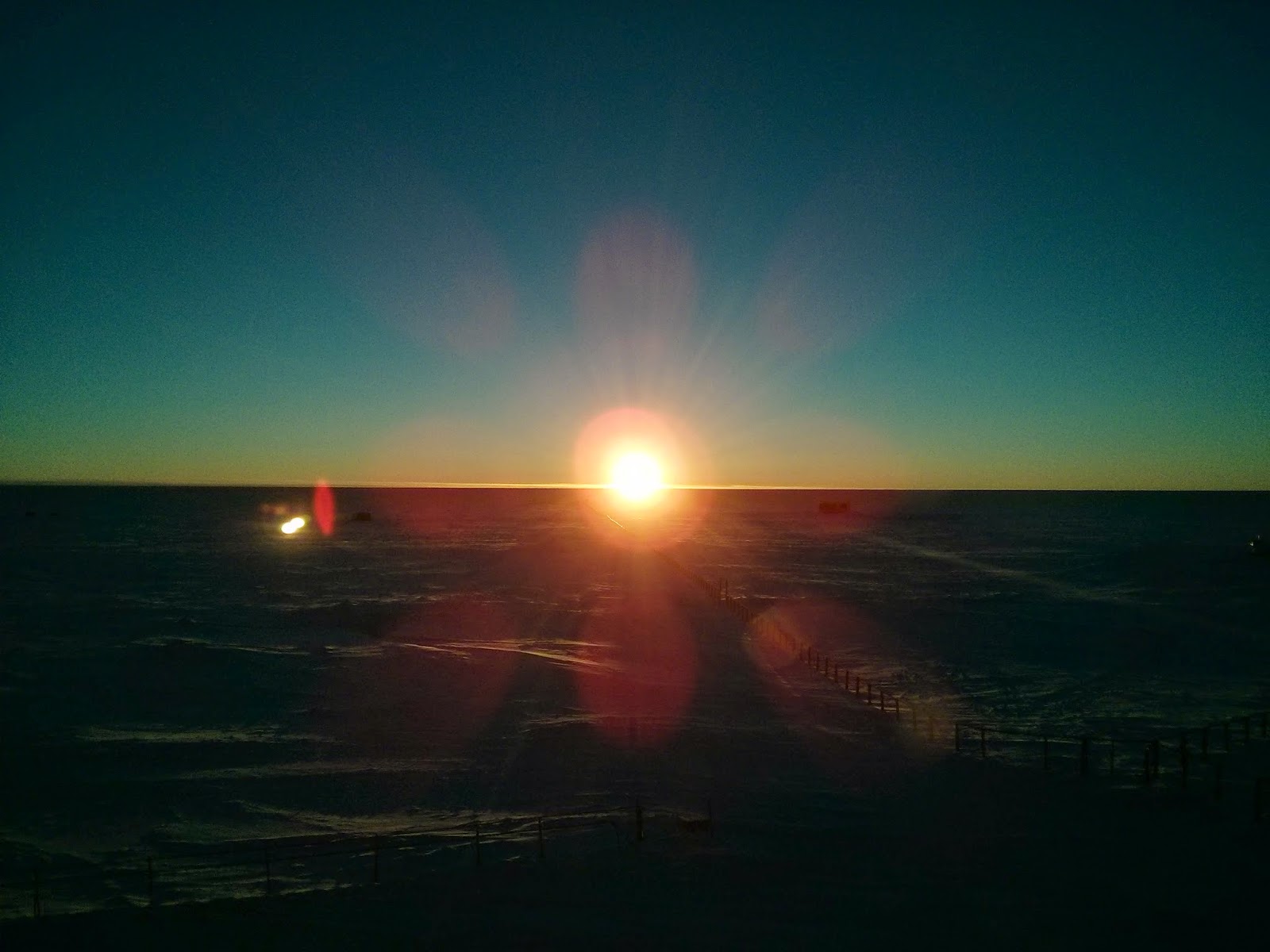