My name is Adrianos Golemis and I come from the city of Larisa in Greece (39° 39′ N, 22° 25′ E, Picture #1). I was recently appointed as the next ESA research Medical Doctor at Concordia Station, Antarctica (75° 6′ S, 123° 20′ E, Picture #2). This is the first entry in the Concordia Base Log, a record of our adventure in Antarctica during the following year, quite similar to a ship’s journal or an expedition diary. Although we are now nearing our departure for Concordia, this log will start retrospectively, from the moment of selection in June 2013 and introducing our little station that will host 13 people next year. 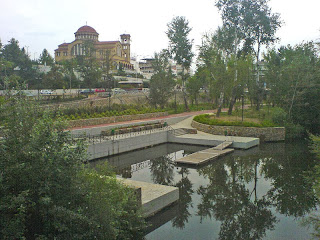 Concordia Base is a European (Franco-Italian) research station in the heart of the Antarctic continent, located at Dome C (“Charlie”, but more preferably referred to as Dome Circe, after the sorceress that ensnared Ulysses’ companions in Homer’s Odyssey). Dome Circe is very fittingly one of the coldest and most desolate places on the Earth. Due to the extreme conditions that prevail around the Station, one could picture it as a totally different world, separate from ours. 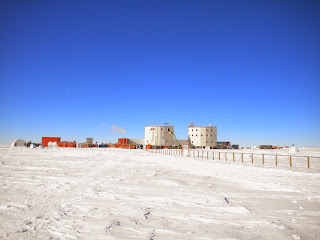 Picture #2 – Concordia Station and its location

Indeed, Concordia is very remote. Situated at a distance of ~1100 km from the coastal French station Dumont D’ Urville (DDU) and around 600 km from the Russian station Vostok, Concordia is only accessible by plane or raid vehicles during the summer months. This makes emergencies hard to deal with – the degree of autonomy needed at Concordia is very high. In fact, during the Antarctic winter, this little base is impossible to reach, which makes life even more adventurous than that of astronauts on board the International Space Station (ISS).

But this is not in any case the only challenge that people face at Dome Circe. This Antarctic plateau suffers from extreme dryness, which makes it ideal for astronomical observations, but can be harmful to human tissue if not countered; it can also disrupt your sleep. What is more, Concordia is located at an altitude of ~3200 m, which is equivalent to 3600 m at medium latitudes like Europe or 4000 m at the equator. This has severe implications to sleep patterns and also robs people off their physical capacity until they adapt. Like all places in the Antarctic Circle, during the winter Concordia experiences continuous night, with complete absence of light for several months. Needless to say, the temperatures are extremely low, ranging from a staggering -80˚C to a heart-lifting -10˚C! But what can be equally daunting at Concordia is the complete absence of external stimuli. Gazing out of the Station’s windows, one can only behold a sea of white. No animals abide there and weather phenomena are a rarity. The landscape is pretty mundane, adding to the monotony, with the only “exciting” features in the plateau being man-made. The last travail is confinement; for an entire year the Concordia crew is unable to leave the station and reach the outer world. Furthermore, due to the extreme frost and merciless winds, the crew is limited to moving only in a small radius of 1 km around the base during the long Antarctic winter, and this with extreme precautions.

In fact, a year’s stay at Concordia, this little bubble of life amidst the infinite white of Dome C is not that different an experience from what astronauts will have to face once humanity reaches another planet. It is this exact set of environmental conditions that renders Concordia a prime space mission analogue and offers us a unique chance to study human performance and adaptation in extreme environments. For that purpose, the European Space Agency (ESA) supports one Medical Doctor every year to conduct physiological and psychological research in the Station, extracting knowledge that will help the pioneers of the future take their first step on Mars and beyond.

This year the lucky one to go is me. “Lucky” might sound a bit funny to your ears if you consider that we are about to travel to the infinite white desolation that is Dome Circe. But there are great returns to be discovered in such a journey, and after giving it much thought, I yearn to go.

Indeed we are outward bound and excited about it (as the melody suggests). Through this blog that regales our adventures in this voyage to the uttermost south, I invite you to share the experience of six French, five Italians, one Russian and one Greek, more correctly, thirteen Europeans, or better yet, thirteen people of this world.

The title of this principal entry in the logbook comes from one of the very first thoughts that crossed my mind when I heard about the Antarctic base of Concordia: In my youth, one of my favourite video games was “StarWing”; in this game you assume control of a small starfighter and try to battle the forces of evil in the galaxy. It all starts from a safe haven where our hero, Fox McCloud, lives – and this is called “Corneria: The Base”. I can still picture the red title letters filling the screen of our old TV set as me and my brother got ready for a virtual adventure on a Saturday morning. Now, on the eve of another, much more genuine adventure, I couldn’t help but notice the resemblance in the name – and in function. Like Corneria, “Concordia: The Base”, will be our refugee for one year, an enclave of biosphere that persists against nature’s most brutal forces.

I hope you enjoy the journey. ҉

The posting date of this log entry is not real. Selection for the crew had not taken part in June 2013.