Wouldn't it be interesting to keep a log of your location at exactly 16:00 once a week? Let’s do that on Mondays: imagine holding up a map of your neighbourhood and drawing a dot to indicate your current whereabouts, same time every week. At the end of a calendar year you could pick up the map and check it: Maybe most Mondays at 16:00 you’re almost at the same coordinates – at work! But not exactly at the same place; perhaps one Monday at 16:00 sharp you were at the office next door or you had to get up from your chair and cross the corridor to answer the doorbell. Maybe one Monday you left early, so your location indicator showed up at home at 16:00 or maybe it was a free day after all, so your dot was far away, pointing to the nearest beach. How would it really look, that graph of your exact position at 16:00 every Monday over a year?

Well, there is a star who could actually answer that: our Sun! As seen from the surface of the Earth, the position of the Sun in the sky changes with seasons. The reason for this is that our planet’s rotational axis has a 23˚ inclination with relation to the ecliptic (the plane on which all planets revolve around the Sun) plus the Earth’s orbit around the Sun is an ellipse, not a circle. This practically means that at exactly the same time, the Sun will be at a slightly different place in the sky next Monday as compared to this one. If you take a snapshot of all the Sun’s positions at the same moment over a year, this is called an “analemma”. Now the difference between the analemma and your own “graph of location at 16:00 on Mondays” is that the Sun is far more predictable! It follows the same path in the sky with no deviation year after year. This pattern looks like the figure 8, only it’s tilted and one of its lobes appears larger than the other. You can have a look at analemma pictures here: http://apod.nasa.gov/apod/ap130922.html
...and here: http://twanight.org/newTWAN/photos.asp?ID=3001422 .

What does change though is how you see the analemma – and that depends solely on your geographic latitude: A yearly analemma over Athens is a bit different compared to a yearly analemma of the same time of day over Paris or Rome. The main change is how much the “figure 8” shape is tilted and how high above the horizon does an analemma (taken at the same time from different locations) appear. So how would it look from, say, Sydney? Well, about the same as from Athens, since their latitudes are almost inverse. But how would it look from an extremity such as the North or South Pole?

Having spent one continuous year at Concordia Station, Antarctica and since my own location at 16:00 every Monday wouldn’t really change at all, I decided to step up to the challenge of photographing the analemma. To achieve that, I had to take a photo of the Sun with a special filter not only at the exact same time once a week, but also from the exact same spot in the Station which was particularly challenging with the winds and low temperatures outside. Still, the result was rewarding as it constitutes what seems to be the first-ever capture of the analemma from within the Antarctic Circle. As you can see, near the poles only one lobe of the analemma is visible (at Concordia we experience a 3-months-long polar night) plus the shape appears almost vertical.

Ϡ The Analemma in Antarctica, music by Vangelis Papathanasiou:
https://www.youtube.com/watch?v=-p1OTqlx7hU 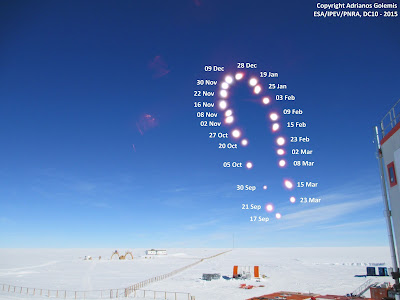 Picture #101: The Analemma in Antarctica. This picture was selected as NASA APOD (Astronomy Picture of the Day) on September 23, 2015.

Wait… one last question: how would the analemma look from the surface of another planet, say Mars? Well, help yourselves: http://apod.nasa.gov/apod/ap061230.html !

Our solar system is full of marvels. ҉

Posted by Astrovenator at 02:10 No comments:

Ϡ "Leaving on a jet plane" by Chantal Kreviazuk:
https://www.youtube.com/watch?v=-6A8ZmYM1r0

Leaving Concordia was harder than expected.

It was 05:00 in the morning when I came down those long stairs one last time (the same stairs I used to rush up and down casually every day during the winter). Outside the ice was dyed in lovely hues of orange, touched by the early sunlight; a peaceful and soothing illumination much in contrast with our feeling of leaving. Three pieces of luggage to carry, the rest of my stuff would be shipped back in the following months. But the heaviest thing was the emotional burden inside.

I’m not going to lie – I had tears in my eyes as I stepped on the plane. It was mainly the people that I would miss dearly, not only the place that generated this internal turmoil. A lot of good friends from last winter and this summer campaign woke up early to see us off. I hugged most of them at least twice as we exchanged invitations for a future meeting. There is something shared among people in Antarctica that is not easy to explain. Some of them you know just for a few weeks, but they do constitute a part of the wondrous puzzle of your life in the cold. I recalled moments of walking on the ice every Sunday, playing basketball at -30 degrees, working in the ESA Lab, dancing at the last party. Playing tavli (backgammon), making photos and cleaning the dishes! Each of those moments a little treasure. As we stepped on the tiny airplane and the door was shut behind us, the pilots prepped the engines. It was deeply moving to see all those friends waving us off and making funny gestures. 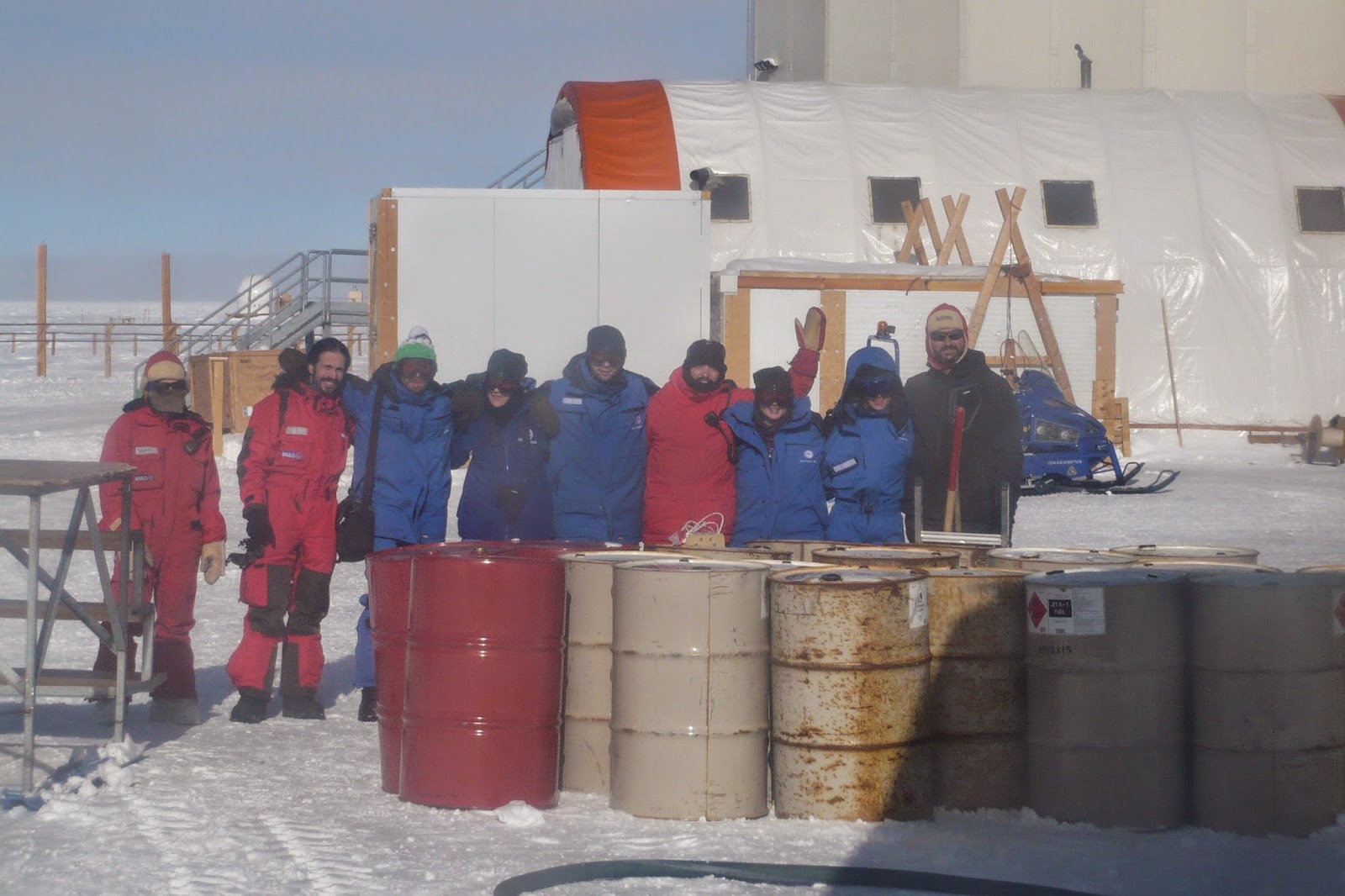 Picture #87 Friends waving us off as we board the plane to the Antarctic coast
[Credits: Cecile Lenormant].


Take off. The twin towers of Concordia were getting smaller and smaller as the morning sun rays danced amidst the clouds. One year of my life, with all its experiences, winter and summer acquaintances, humorous moments and more serious ones, all the great things I witnessed and all the marvels I beheld were suddenly fading away. I was leaving Concordia – my Concordia.


In the end it was not so different than the day when you finish school or graduate from university. There is however something more finite to leaving Dome C – and it is this which wakes you up from the routine you are accustomed to in order to throw you upon your next step in life. 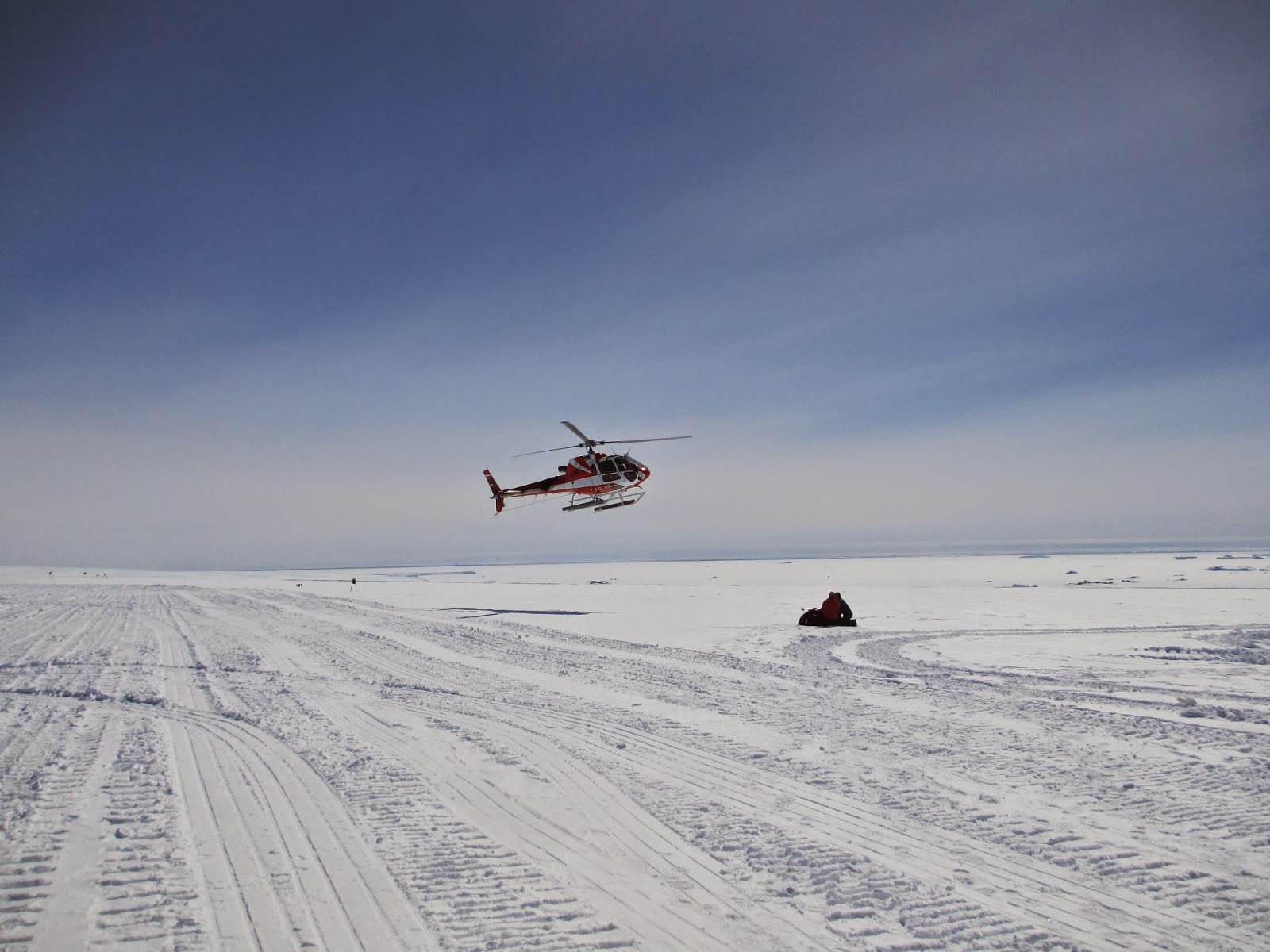 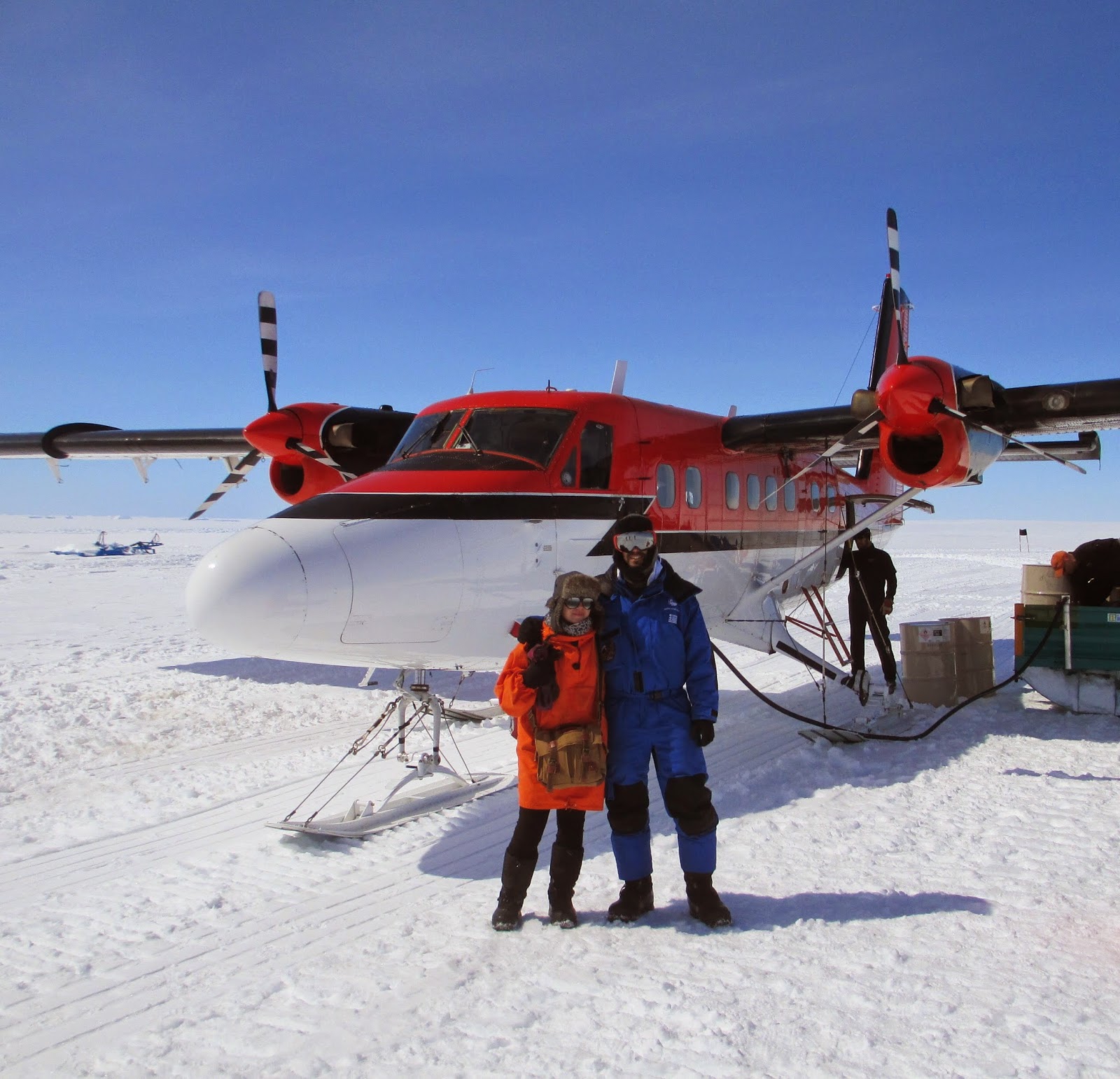 Flying in a Twin Otter was not a very comfortable experience even though we were only 4 passengers instead of 12. In part because of my emotions and in part because of the rough seats(!) I didn’t manage to get much sleep even though I was exhausted. I also recall that I did not eat my trip lunch despite knowing that it would be as delicious as all the meals we enjoyed in the winter.

Four hours later we landed on the airstrip near the French-Italian base of Cap Prud’Homme – and from there we were immediately transferred to the coastal Station of Dumont D’Urville (DDU) nearby. I finally enjoyed my first ride on a helicopter – seeing a real landscape different than the white vastness of Dome Circe was bewildering at first. There were rocks and icebergs around me, not to mention the frozen sea and islands.

Ϡ Vangelis Papathanasiou, "Theme from Antarctica":
https://www.youtube.com/watch?v=GOwuniIgYXM
Yet i felt the greatest surprise when I first noticed a snow petrel flying by. I was genuinely and profoundly astonished for a moment as the white bird glided in the air next to me. Next thing I remember were the penguins that literally live around DDU Station. I hadn’t seen a living animal for more than year and our meeting with the Antarctic fauna was a welcoming sight. Over the next days we would visit the nesting places of both the Adelie and Emperor penguins and we would be lucky enough to observe the hatching of their eggs and the emergence of the newborn.

Rejection is a very predictable human reaction when you leave something that you love behind. We ‘ve all experienced it as children, but it returns to us at moments of loss or nostalgia. Thus it was no great surprise to me that in the first moments after landing I caught myself playing down the beauty of Dumont D’Urville’s surroundings or comparing the functions of the base to my life at Concordia.

Everything seemed to be so different here, another world. The snow was actually melting as you held it in your hand and that’s something that does never occur in the lower temperatures of Dome C, where Concordia is situated. The horizon was not flat as the one I had been used to. And I cannot sufficiently describe my amazement when during a casual discussion at DDU someone mentioned to me “Oh, yes, this occurs mainly in the night”. The night? It had been two and a half months since I saw a sunset and I was definitely not prepared for such an abrupt change! Picture #90: The landscape at Terre Adelie – Icebergs and Emperor penguins.


There were other subtle differences between everyday life at the coast and in the heart of the Antarctic continent. Clothes, for one: I regretted every time I used my polar suit at DDU, it was apparently too warm for the high temperatures of Midsummer there. This was actually the first time in a year that I saw an external thermometer register a positive-value temperature (in Celsius)! Also, as we no longer were at an altitude of 3200 m, moving around was much easier physically and I recall running about 10 km outside without breaking a sweat. Since there is no atmospheric pressure difference at DDU, yoghurts don’t pop when opened and beers don’t explode in foam as at Concordia! Your mouth is not dry all the time and you can finally sleep profoundly and non-stop. Yet I still unconsciously maintain some of the habits I developed at Concordia – for example I do knock before touching any metallic surface to instinctively avoid static electricity!

All these may seem minor, but I find that they did influence my first days at DDU quite a bit. It was the final severance of the connection with the winterover experience and all these tiny habits that I never noticed as my own practices until I lost them. I was now in transit, heading back to "normality".

But going away is not negative or always gloomy. While glancing back is bittersweet, looking onward to the path that lays ahead can be inspiring. And this past can give you all the strength and determination to march on and achieve everything you need.
In summary, I do miss plenty of last year but simultaneously I am content to enjoy Antarctica’s wildlife and landscapes in a different place before returning home. In the twelve days we spent at DDU we celebrated (our second) Christmas in Antarctica and walked on the ice pack to visit Cap Prud’Homme again, skimming among icebergs upon the frozen sea and spotting a seal that came out to play. I finally had the chance to send postcards from Antarctica to friends and family. And I did benefit from the opportunity to briefly swim in the sea as well! This was not a bad ending after all. As someone once wrote, the road goes ever on and on… So here i leave you with some pictures of the road so far.   ҉ 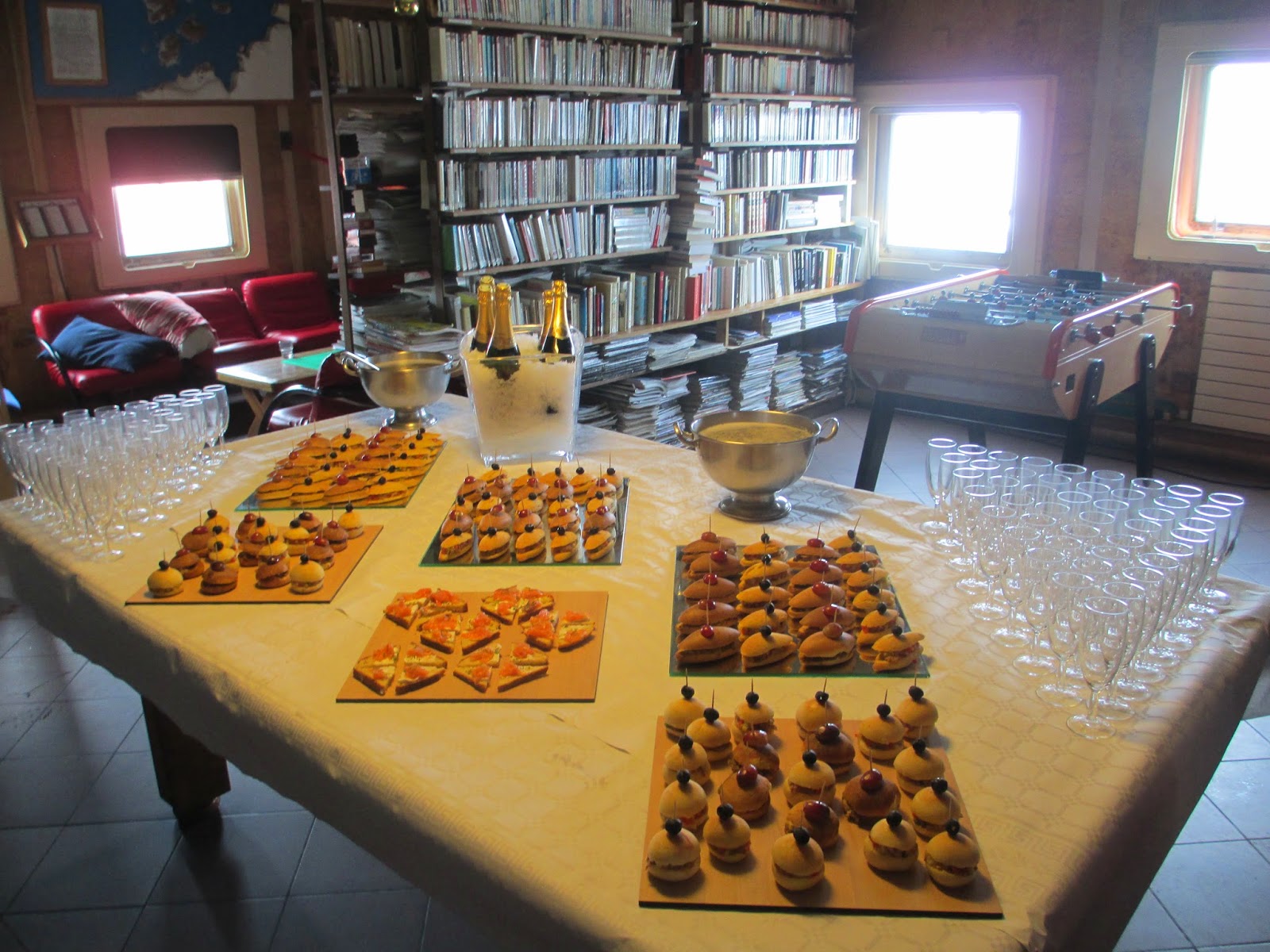 Picture #91 My second Christmas in Antarctica... I guess it’s becoming a habit now! 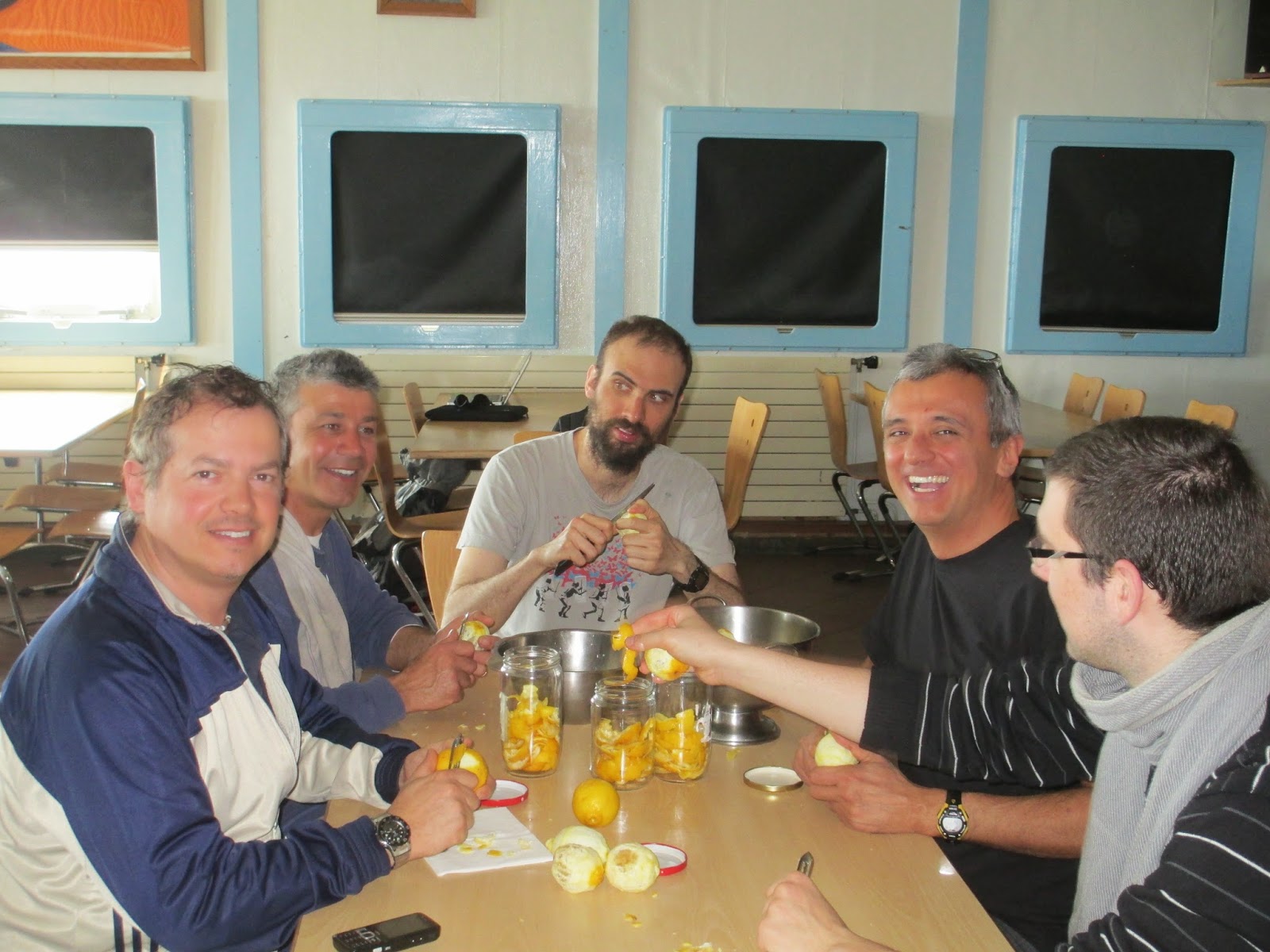 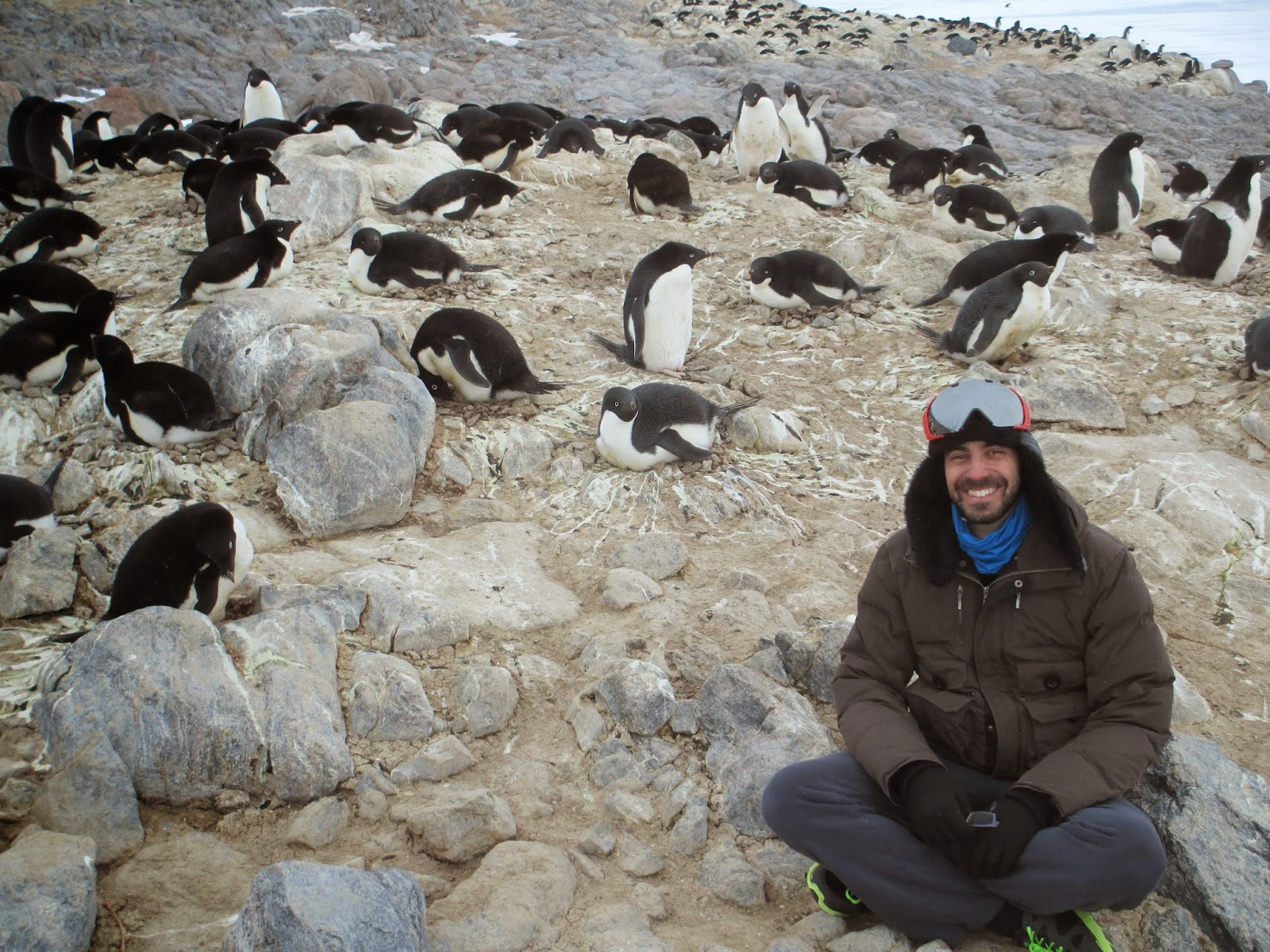 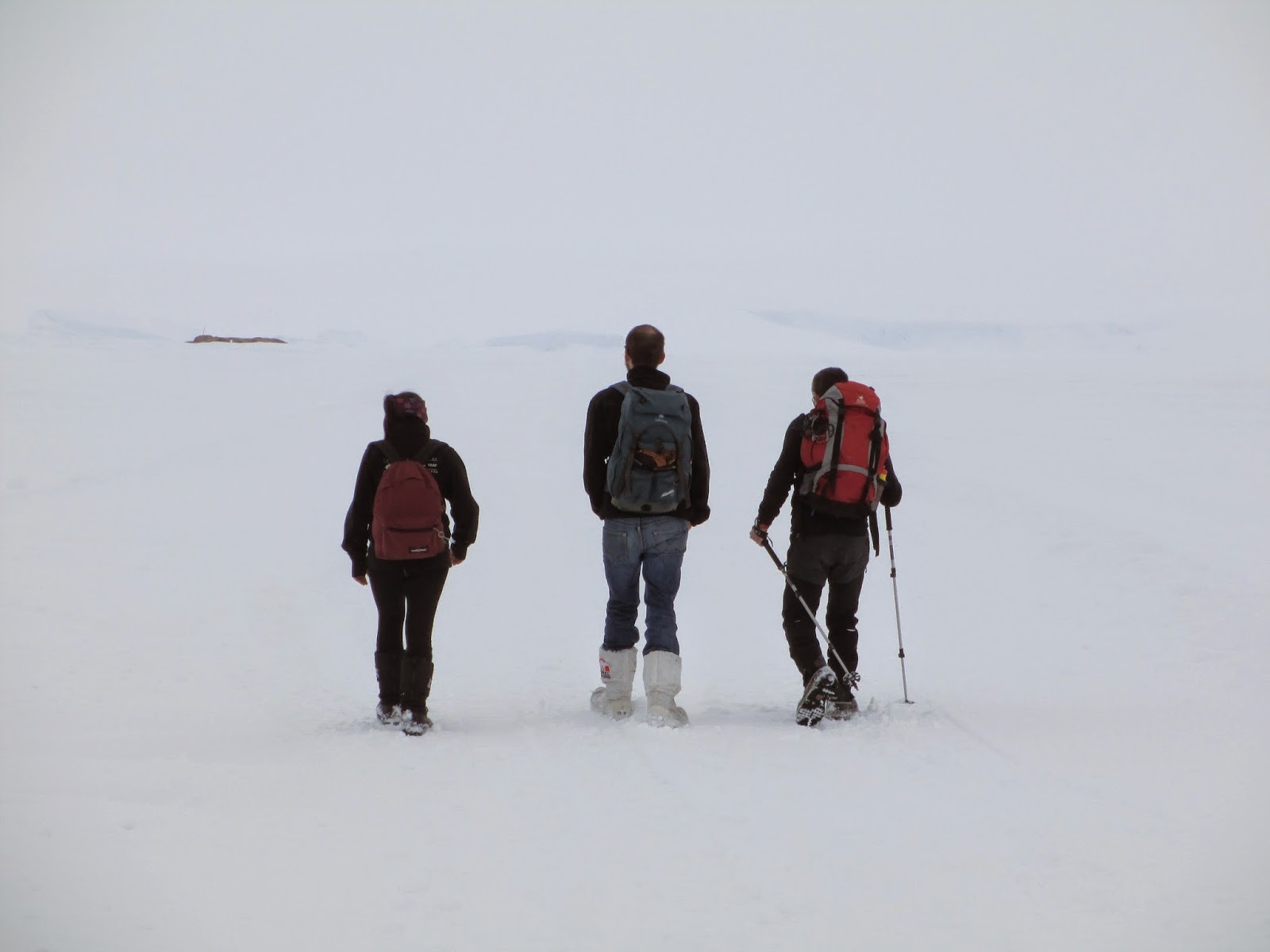 Picture #92: Preparing limoncello for Christmas - Picture#93: Among the penguins
Picture #94: Marching to Cap Prud’Homme upon the frozen sea. 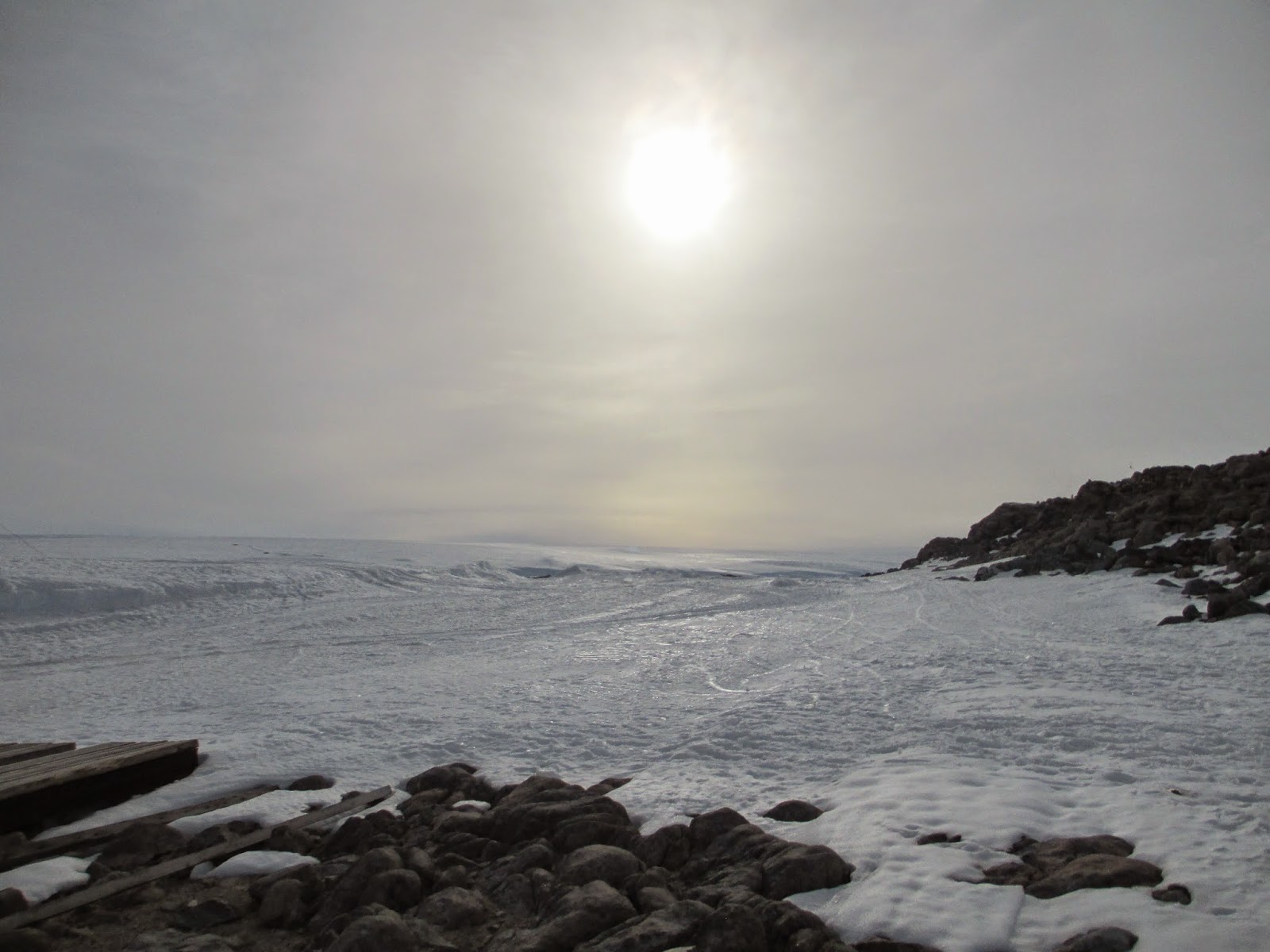 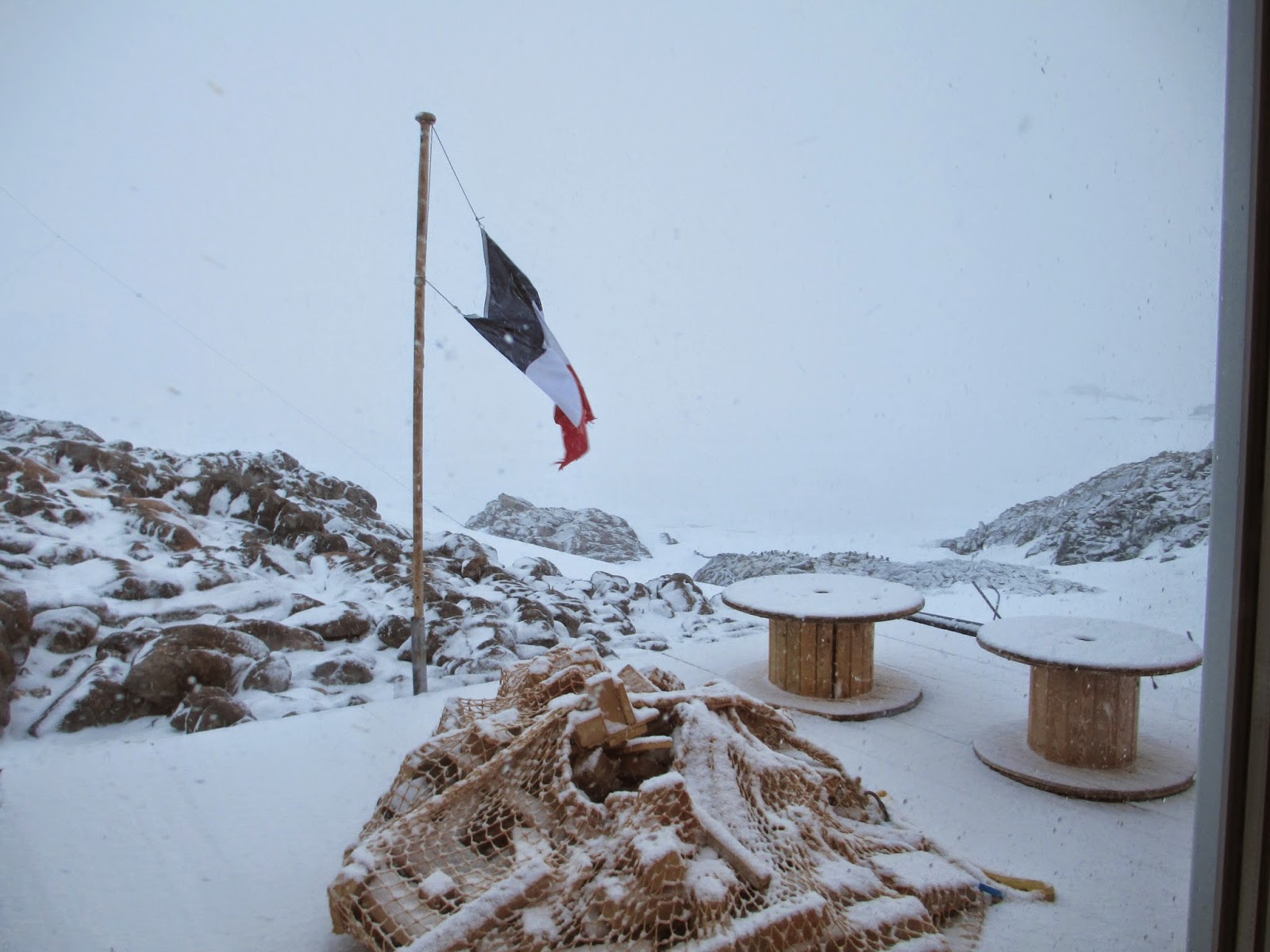 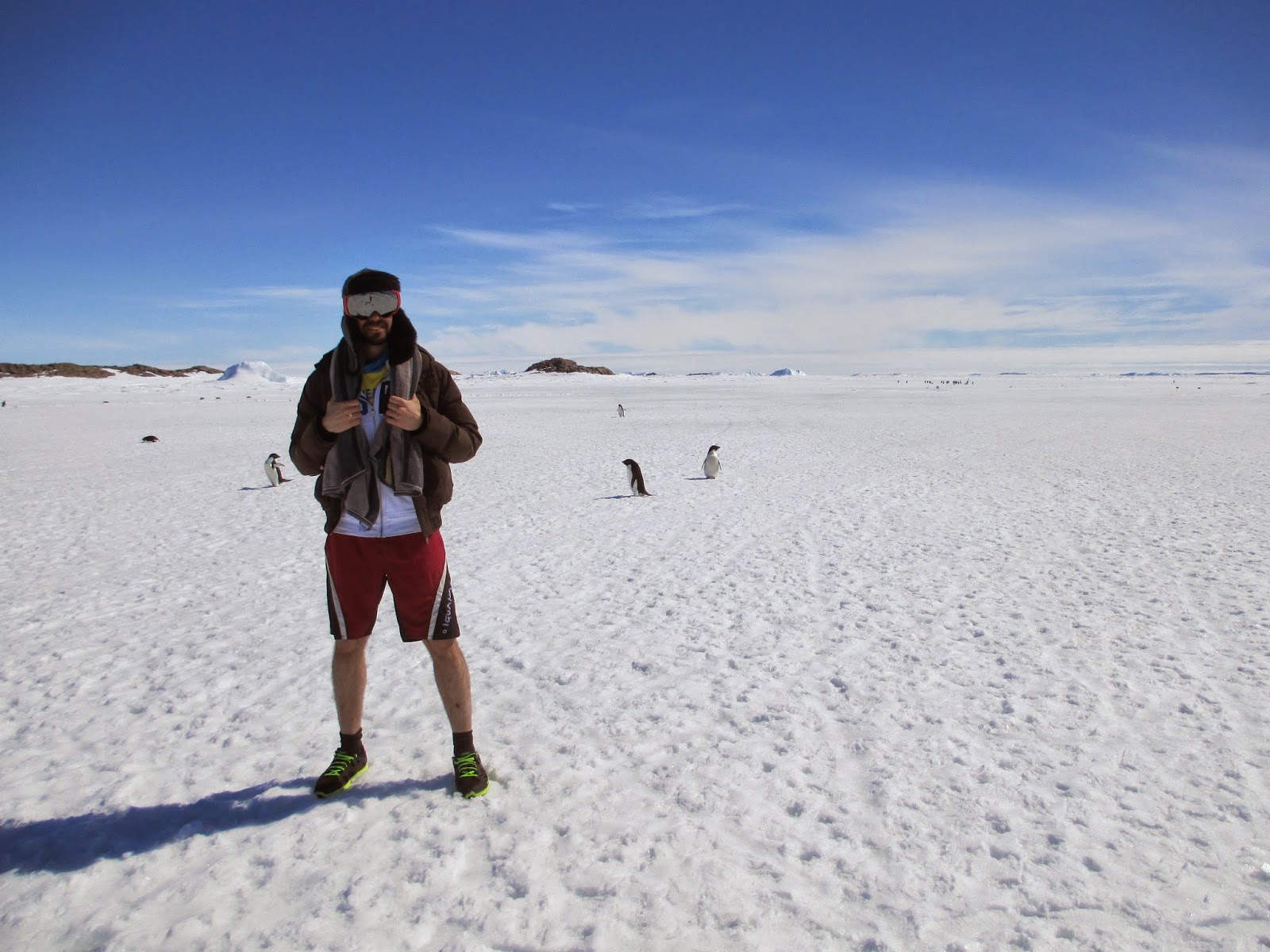 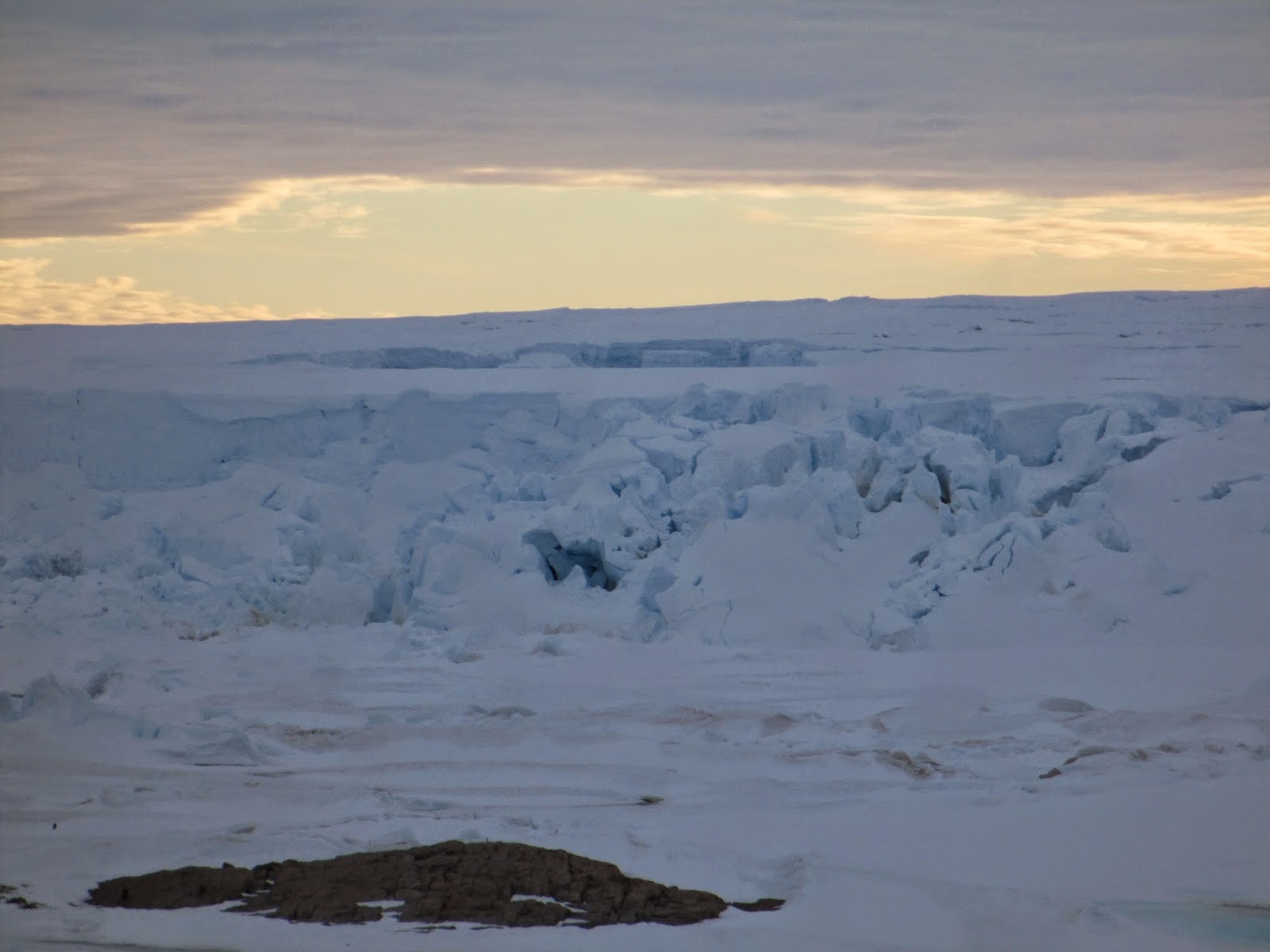 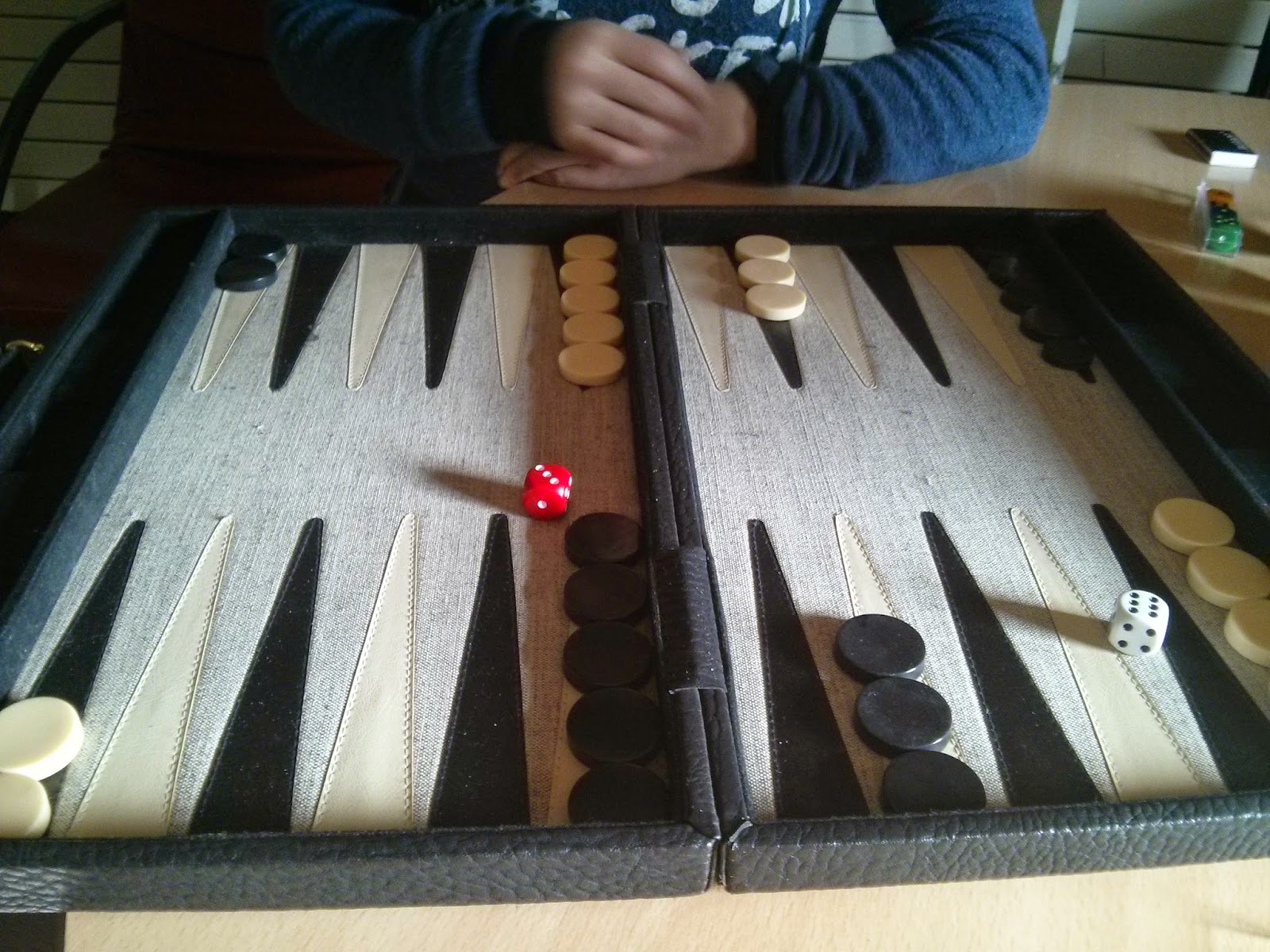 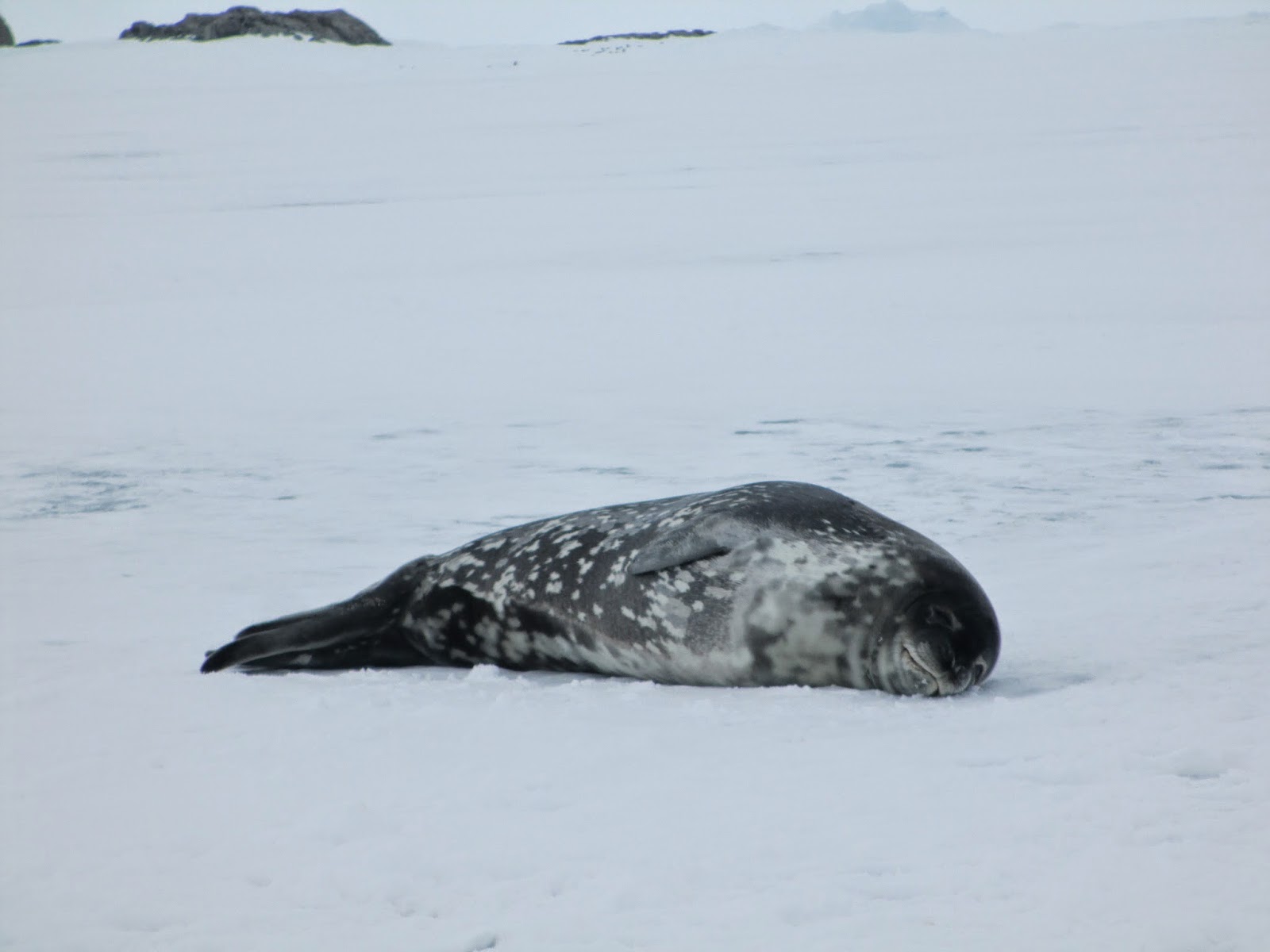 Posted by Astrovenator at 05:00 No comments: