Ϡ Cat Stevens (aka Yusuf), “Peace Train”:
https://www.youtube.com/watch?v=_6mKMV0d2cs
There’s a rather insignificant line in one of my favourite books that reads: “He left that place and never came back there alive again”. It really does not influence the plot in any substantial way, but the finite nature of this statement made a strong impression on me in my childhood. There are days here at Concordia (or nights for that matter, it makes no difference now that the sunlight is permanent) that I find myself wondering if I will ever return to Antarctica again. My home for a year.
The signs of Change were evident for some time now. First of all, as the end of the winter campaign draws to a close, you start counting weeks, not months. Then that turns into days. Five days left till the first plane arrives. Three. Two. Tomorrow. That makes honestly for a great difference if we consider that when you first come here you think there’s an infinite amount of time to pass.
Then there’s all the preparations. The thorough cleaning of the Base. Arranging the sharing of our rooms with the incoming summer crew. Removing the snow that accumulated around the feet of the Station due to the winter winds – a bit like dunes of ice. And of course, preparing the runway.
And then there’s the sun. Our good old friend, the day star, which now refuses to leave the sky even in the middle of the night. The constant daylight established itself just a week before the end of our isolation. And the rhythm of our everyday lives here changed with it. From the relatively calm pace of the winterover – calm in part because you feel there’s so much time left that there's no need to rush and in part because living in isolation requires some kind of moderation – we now switched to a hasty routine. We finally had an evident deadline. And we ought to finish all that we needed to do before it reached us. To cut and draw our personal “road signs” (boards indicating the distance to home which every crew traditionally leaves behind), to pack our luggage even though we are not to leave the Base for another month. And to get ready to pass on our work responsibilities to the next winter crew. 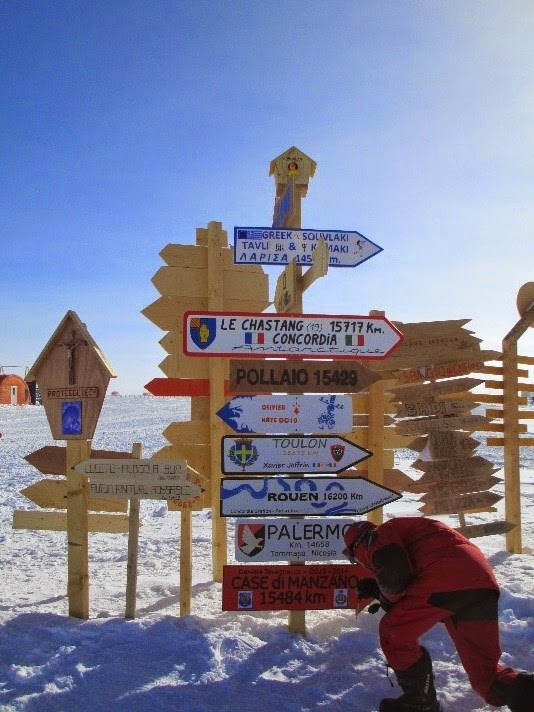 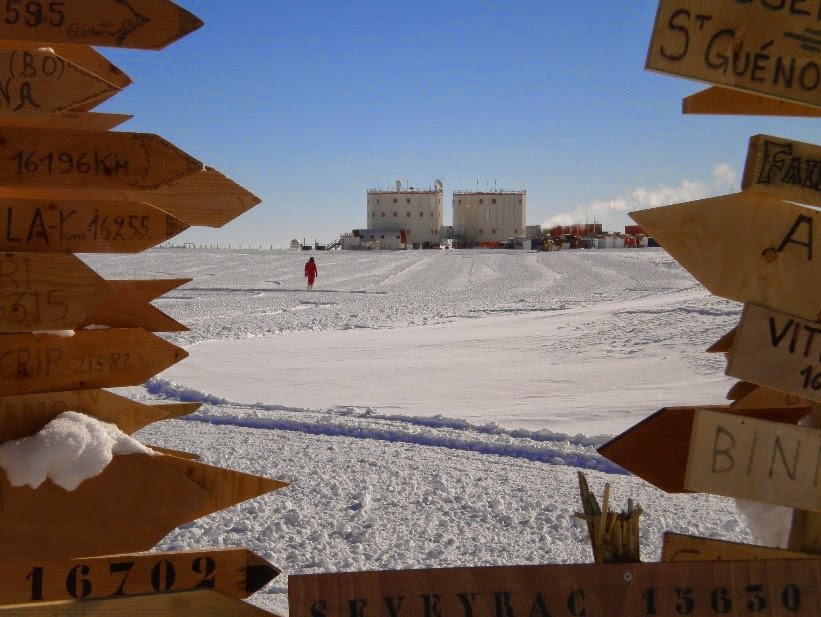 Pictures #79 and #80: Fixing our DC10 signs outside and Concordia among the panels.

There are still other minute details that you involuntarily notice and which make the wheels in your mind turn in different ways. The temperature readings are currently as high as -32 degrees, an unbelievable variation from the harsh -80 that we experienced in the heart of the winter. Could it really be so long ago…? And yet time did pass by as you can tell from other signs: For example the degradation of the flags that flew atop Concordia for all the winter. 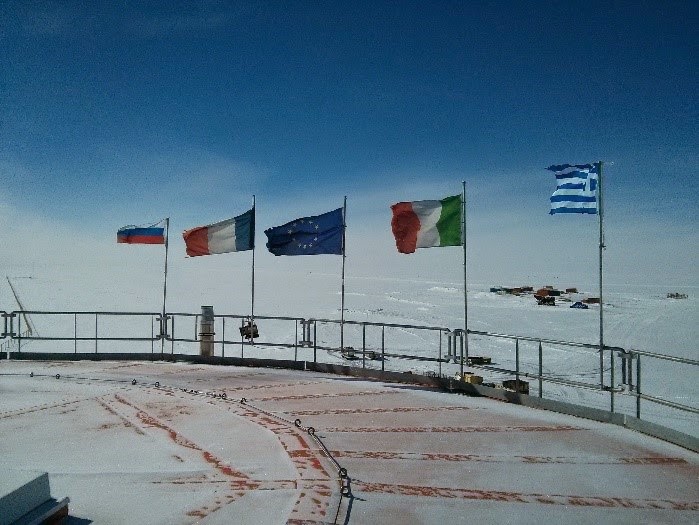 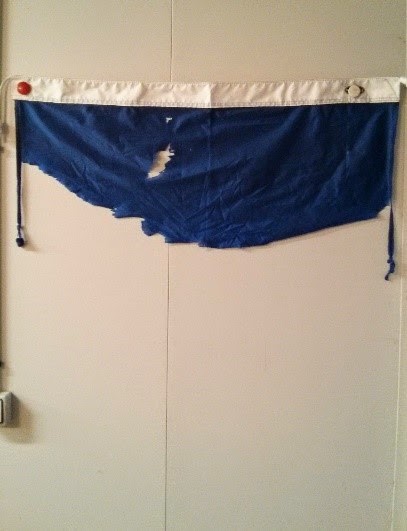 Pictures #81 and #82: The flags at the start of the winter and what remains at the end.
And even more details, harbingers of Change. For the first time in eternity it seemed, I heard a radio transmission from the Station’s main communications console. A transmission from another Station. The news flowed in the next days. The peripheral summer Bases were open and people were on their way to fly in to Concordia too. Ships, aeroplanes and raid vehicles were getting ready. The world was preparing to come back to us once again.
But the most defining moment was that special morning when the Kenn Borek Air Bassler plane coded “VKB" was sighted in the light blue skies above Concordia. A tiny black spot in the horizon. An avalanche of change.
I slept very little the night before. Partially because of the excitement and also because we held a small festivity in light of our campaign’s inescapable end. Still I remember that I woke up on time to clean my Lab once more and to dress up in polar clothes in anticipation of the landing. Sunny day, clear weather.
The tiny black spot up in the skies grew larger and larger. The radio was buzzing as we took our places – ready to connect the ladder, unload the new supplies and help the passengers into the Base. We saw the posterior skis (and not wheels!) of the plane flirt with the icy surface. We pictured the faces of the people aboard – and we felt the contrast of feelings within us.
Touchdown.
In some peculiar way it felt like not a day had passed since the end of the last summer, when the last flight left us in isolation. I was there that morning too, the last to return as that other plane took off, same weather, similar feelings. And today it seemed that the winterover was a parallel experience, cut off from all that, as if a film director had edited it out of the movie for a moment, taking those frames away and batching the rest together – summer to summer. In a way it was as if the winter period was a life in a separate world, now departed and inaccessible.
The next thing I noticed was the plane rushing in the “taxi way” towards the Base. Bruno was signalling its course, dressed in orange garments. The door opened and the same pilots as last year came out. Together with many familiar faces that we had met in the previous summer campaign. We shook hands and hugged, even with those with whom we had never been close before. Most of us made videos and photos (I’ll be happy to upload mine once I’m back!). 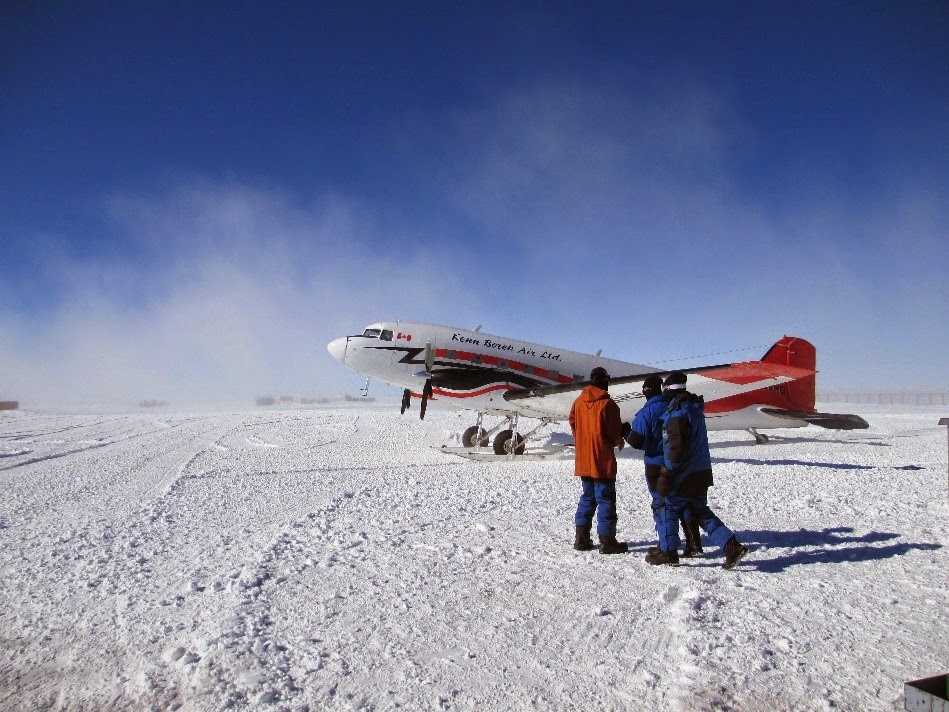 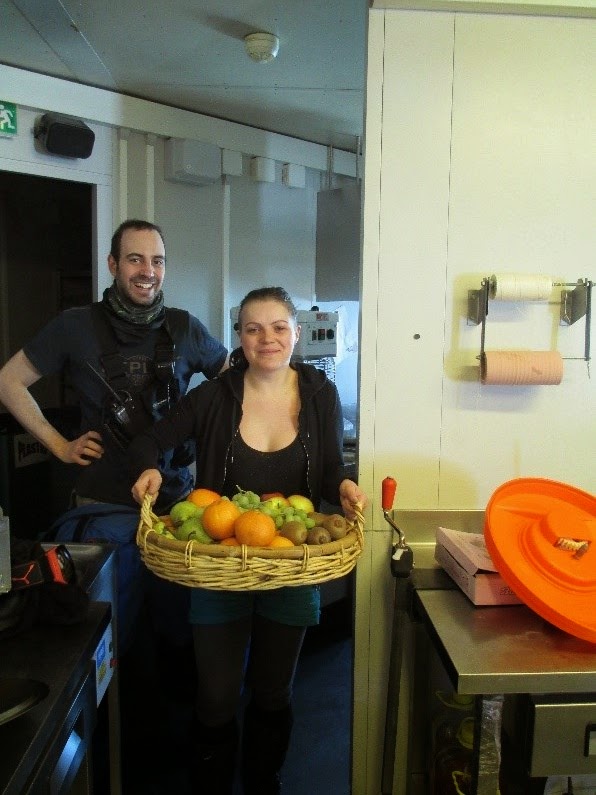 Pictures #83 and #84: The Bassler just landed and we are exhilarated to get fresh food!

And then, to work. The newly-arrived fresh food had to be carried inside and the newcomers were in no position for heavy-lifting (unlike the winter crew that was living on Dome C for a year, they had to re-adapt to high altitude, which debilitates physical strength). On the other hand, the fruits and vegetables could not remain on the ice! So we worked and worked until it was all safely inside.
During the long polar night, I never really felt that I missed the light – and yet I celebrated its return immensely. Similarly, it seems I had completely forgotten the pleasure of biting a fresh fruit, it never occurred to me profoundly that we lacked fresh food in the winter. Once again, the joy was greater than I would imagine when we tasted tomatoes, apples, peppers, olives, oranges and kiwi again. It was like our minds were unlocked and a storm of sensations sprang forth.
The summer is so different from the winter in so many untold ways. We now share the Station – which felt like our Station for a long time – with the summer crew. In the same time, it’s great to socialize with new people. The stress of being enclosed in a tin can with the same companions for a year has also evaporated. And as the summer progresses, we continue to notice the markers of our own impending departure. For most of us, it will be a permanent goodbye to Antarctica. The first plane has landed at Concordia. And soon another one will take us away. 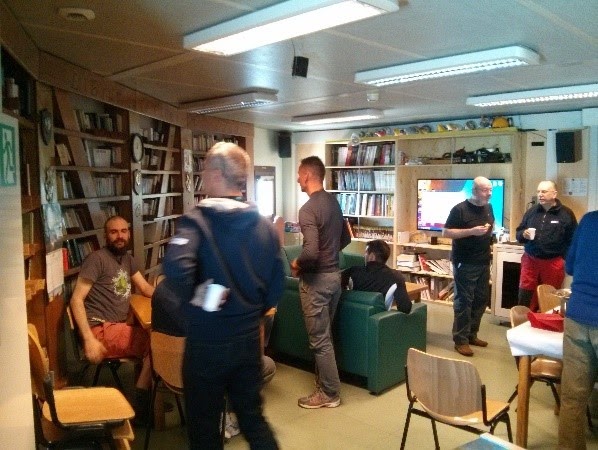 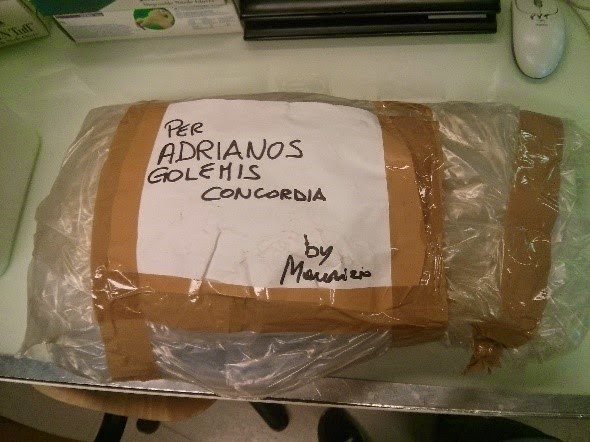 Picture #85 (over): The Base full of (new) people, basking with life again.

Picture #86 (under): Already a package to receive with the first flight – ESA Lab material.

As a child I used to be quite a nostalgic person. I remember for example that I did not want to grow up like other kids of my age since I was having a good time right there, right now. One can argue of course that at the end of every “adventure” you only recall the nice moments. Under this effect, I definitely feel nostalgic already for having to leave the white vastness of Concordia behind very soon. Particularly because I have all the vivid colors of this last winter’s livelihood imprinted on my mind now: I remember where I was sitting when I spotted my first Aurora, what did we eat for Halloween and how it felt to walk to the Astronomy shelter surrounded by utter darkness. But I do not feel melancholy at any level. Just a sweet taste that comes with reminiscing… until we all embark on our next adventure.


In the end, what is life if not a meticulous collection of great experiences? I am thrilled to have added Concordia to this. With its arduous moments and its magnificent delights. . ҉
Posted by Astrovenator at 01:45