Log Entry #3 – The Calling
My selection for the Medical Research post at Concordia did not go unnoticed by friends and acquaintances. As I was struggling with the decision I had ultimately to make, more and more people found out about my upcoming adventure and sent their congratulations or wishes. This feeling was sometimes pleasant, sometimes a bit intrusive. For example, I knew I would have to hold a long conversation about Concordia every time I was introduced to a new person by one of my friends: “This is Adrian, he’s off to Antarctica”!
People are easily amazed or astonished when they hear that you‘re about to set aside the world’s little community and live with a band of brothers what they sometimes perceive to be an ascetic life. Seldom do they realize the full implementation of such an endeavour – the positive and negative aspects. Most do not comprehend what 12 months in the Antarctic desolation mean, in a place where white is the only sight around, no birds, animals or people pass by for the entire winter and the food is fresh only in the summer. On the other hand, people also do not anticipate many pleasant facts, like that from Dome Circe one has the opportunity to admire the majesty of the Southern Lights as well as the myriad of jewels in the clearest sky on the planet.
Obviously, my knowledge about these is also limited. It is only after a year’s stay at Concordia that I might have a full appreciation of what the experience is like. One must prepare however!
Aside from what the world thinks, you have to battle your own inner demons to be able to set your mind to go (let alone to face your loved ones and utter the words). Doubt can be omnipresent; for every great moment you imagine in that shelter amidst the ice, there’s a juxtaposition in your thoughts, born out of your inner weaknesses. In my case, many a time failures of the past occupied my mind, giving rise to doubts. This did not transpire with distress; it was more as if a tribunal was constantly going on in my head – and the defense presented their many arguments before the judge would say “Aye, let’s go to Concordia!” or “Forget about it”.

One of the recurring themes in this internal struggle was adaptability. I remember the first time I attended a summer camp, it was just five days but I quit on the third. The next year I went on to join a different camp for 10 days – and survived. Although I am very confident that my ability to adapt has improved greatly through the years, a concern in your head is always a concern and only with time can it be relieved. And time was the key aspect here.
Over time, slowly I was dragged into this hype that surrounded me every time I mentioned Concordia and my unresolved dilemma. In general I enjoyed sharing the thoughts with family, friends and loved ones, however at times it was tiresome to engage in long series of explanations when someone would ask me “So - where are you going to work next year?” Still, this repetitive procedure eventually allowed the idea to mature in my head – and that was a blessing.
After a few weeks I realized how mindful I had to be. I had to make sure I am finally going to the Antarctic for a year because of my own deep reasons, not because society found it to be “cool”.
It was fortunate that I had spent the previous year at the International Space University, a higher education institute that (as the name suggests) is devoted to the studies of space. ISU (Picture #4) brings together people from different cultures and backgrounds, combining their efforts in a unique amalgam. Visiting ISU during the summer in order to attend the alumni conference brought rays of hope into my heart: I came closer to making my final decision. Meeting old friends who were excited about space sciences – exactly the kind that I would have to implement at Concordia – coupled with their harmonious, multicultural polyphony, helped me shape my decision a lot. Diego and Roman, who had been through similar experiences in confinement, aided me to realize what I should expect from a year’s stay at the world’s end, plus how to cope with it (and as my girlfriend says, Anja played no small role as well!). 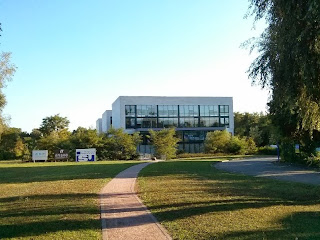 Picture #4: The International Space University, a place that makes dreams come true
While I started partially preparing for the case that I might go, it wasn’t till I visited the Sacred Rock of Acropolis in Athens (Picture #5) that I fully made up my mind about going.
Watching the Greek flag dance in the arms of the wind at the birthplace of democracy, my thoughts dwelled upon another flag that was waving fiercely in the Antarctic: The first Greek to ever visit Concordia, Dr. Evangelos Kaimakamis in 2012, had hoisted the blue and white banner in the middle of Dome Circe. This moment was immortalized in the social media and I had caught sight of the image on the internet. It was a fleeting memory suddenly rekindled in my thought a summer morning, under the shade of the Parthenon, and deep inside I yearned to live the same experience at Concordia.
“Walking on the relics of history, like sculptors we craft the curves of our future.” 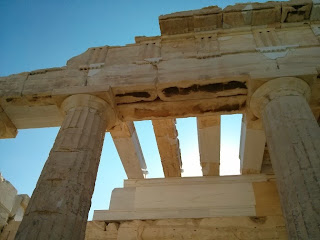 Picture #5: The Parthenon, bathed in light
That was the moment of transition in me. From someone who was selected to go to Concordia, I felt I became someone who himself opted to go, without fear or second thoughts, I breathed in the air of this forthcoming unique adventure.
Back at ISU, friends were excited. I remember Dani joking with me: “Promise me you will go to Concordia, Adrian”. Her commanding look as she spoke these words, a characteristic probably stemming from her Serbian origin, left me little choice! A few days later, Szymon told me over a glass of beer in our graduation night: “You have to go, Adrianos! You have to go, for all of us!”.
Ϡ Achilles Last Stand, by Led Zeppelin: http://www.youtube.com/watch?v=p6S9oqJRclo
“It was an April morning when they told us we should go,
As I looked at you, you smiled at me – how could we say no?
With all the fun to have, to live the dreams we always had
With all the songs to sing, when we at last return again”
I could not reject the calling. I had to answer it. And even more, I wanted to do so. ҉